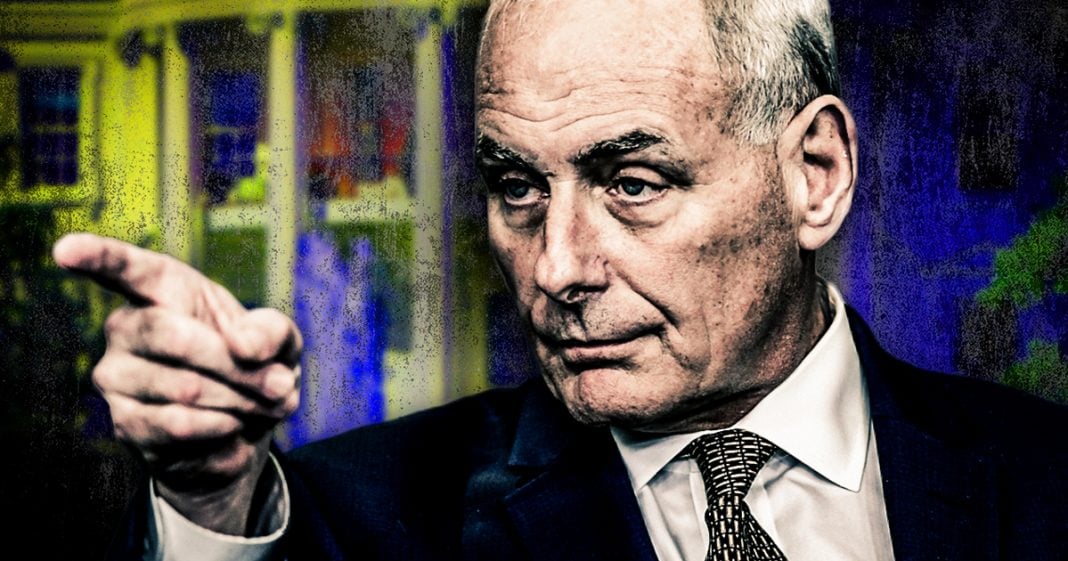 According to a new report by The New York Times, Donald Trump has reportedly asked for his Chief of Staff John Kelly’s help in “moving Ivanka and Jared out” of their roles at the White House. It may be too little, too late for the President, as both his daughter and son-in-law are the targets of multiple investigations. Ring of Fire’s Farron Cousins discusses this.

According to a new report by the New York Times, Donald Trump has reportedly enlisted the help of chief of staff, John Kelly to try to get Ivanka Trump and Kushner out of the White House. Here’s what’s so fun about this story. Now I know we have covered in depth the scandals going on between the two, between Ivanka and Jared. You have outside countries looking at Jared Kushner as a guy who’s easily manipulable. They think they could use him to get to Trump or get what they want in the US in exchange for financial deal. We’ve seen him do his little pay to play that was exposed this week. Ivanka’s now under investigation by the FBI. Jared lost his full time security clearance and now has a restricted one. So yeah, it makes perfect sense that Donald Trump would want to get these two morons out of his White House.

But this is his daughter and his son-in-law we’re talking about here, two people who were grossly unqualified to even get positions in the White House and now because he put his daughter and her husband there, he doesn’t know how to get rid of them. So he has to go to John Kelly and say, “Hey, John, look. I know you and I aren’t getting along very well recently and there’s reports that you want to quit. But could you help me get these two idiots out of the White House because they’re really bringing down morale around here and they’re probably gonna get us all a jail sentence by the time this is all finished.” Now whether or not John Kelly actually wants to help Donald Trump do this, that’s up in the air. We do know that Kelly was instrumental in getting Jared Kushner’s security clearance revoked.

So it’s likely that Kelly could end up at least getting rid of Jared Kushner and if Kushner goes, I’m sure Donald could talk to Ivanka and say, “Look, sweetie, your husband had to go. You’re my daughter. But you gotta get out of here with him. I’ll see you at Thanksgiving, I guess.” After this story broke, just a few hours later, actually, a new one came out saying Kushner was prepared to dig in and really go after John Kelly if he decides to try to force Jared and Ivanka out of the White House. So we’re kind of gearing up at this point for a massive Jerry Springer style fight between John Kelly and Jared Kushner and to be perfectly honest with you, my money’s gonna be on John Kelly. I know he’s not a particularly savorable character. But I do think in terms of any kind of altercation between the two, whether just words or, hell, even if it gets physical, I’m pretty sure John Kelly’s gonna knock Jared Kushner out of the park on this and they need to. It’s not gonna get rid of all the corruption in the White House.

That starts at the heart with Trump. But at least if you get rid of Jared and Ivanka, you can give the public at least the impression that you’re trying to take on the corruption in your White House, even if it is your own family members and I think that’s what Trump’s trying to do here. He understands he has a massive image problem and it pretty much starts with those two morons that he put in office and so now he has to figure out a delicate way to get rid of his daughter and her husband because they’re helping to bring down this entire administration. Now the other side of that is that if it happens, if Jared and Ivanka get kicked out of the White House, is that gonna create any bad blood between them and the president? Because if it does, that sounds like something that a guy like Robert Muller could use against Donald Trump and perhaps get somebody like Jared Kushner to flip. Jared Kushner understands that with all of the investigations that he’s currently under and now his wife is too, they could be looking at some pretty hefty prison terms.

So what better way to get back at the man that kicks you out of the White House than by rolling over on him to the special prosecutor? That’s what I’m hoping happens. But I guess we’ll just have to wait and see.