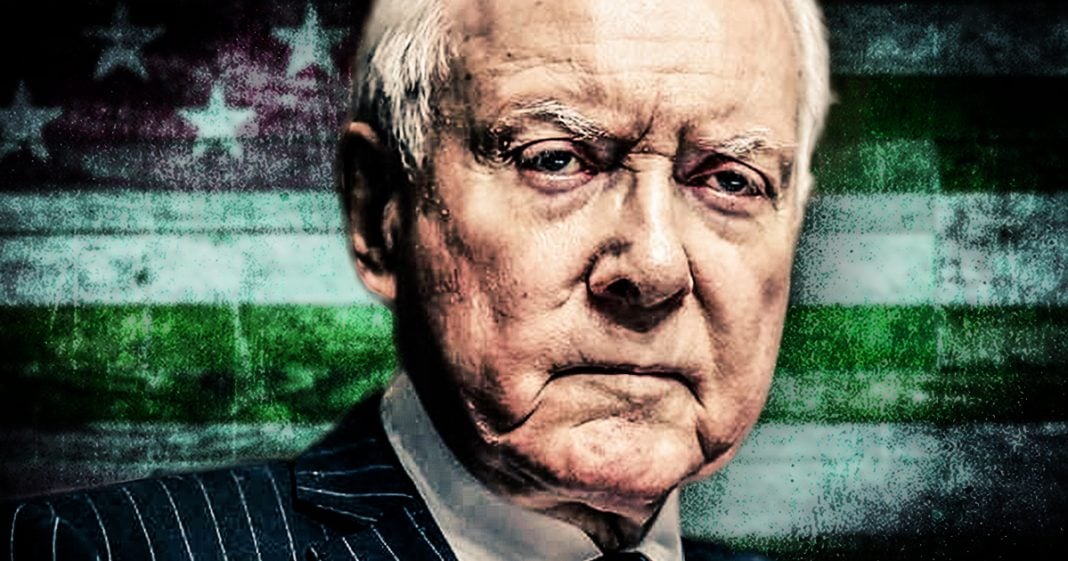 During a recent speech at the ultra-conservative American Enterprise Institute, Republican Senator Orrin Hatch said that the Affordable Care Act was one of the “stupidiest, dumbass” pieces of legislation ever, and if you support the bill, then you are also a stupid dumbass. The encounter was caught on tape, but Hatch’s office insists that he was just being sarcastic. Ring of Fire’s Farron Cousins explains that Hatch was not being sarcastic and meant every word he said – and that’s why no one is going to miss him when he leaves the Senate.

Republican senator Orrin Hatch from the State of Utah has announced that this is going to be his last year in the Senate. That’s probably why that this elderly man decided he could go out there and just trash as many American citizens as humanly possible. At a recent speech at the ultra-conservative American Enterprise Institute, Orrin Hatch had the following to say about people who support Obamacare. “The Affordable Care Act was the stupidest dumb-ass bill that I’ve ever seen.” Forget for a moment that that’s not a grammatically correct sentence. “Now, some of you may have loved it. If you do, you’re one of the stupidest dumb-ass people I’ve ever met.”

Orrin Hatch, Republican senator, a guy who’s been serving in the Senate since 1977, just called millions of American citizens dumb asses. Now that’s the kind of thing we would probably expect from Donald Trump, and it’s probably something he’s said behind closed doors. But Orrin Hatch, again, a guy who’s what? I think 84, 85 years old maybe, been serving in the Senate since 1977.

Now that he’s leaving, he has no problem saying millions of American citizens are dumb asses. That is the word that this idiot used, dumb ass if you support this. You’re stupid if you support the Affordable Care Act. If you think that people in this country should be entitled to health insurance, that they should be able to get health insurance even if they have a preexisting condition, and that they should be given subsidies to help pay for it if they’re too poor to afford it on their own so that they can take themselves or their children to the doctor to get medicine to stay alive, then you’re a dumb ass in the eyes of Senator Orrin Hatch.

He is example number one, exhibit A, as to why we need term limits here in the United States. Nobody with the kind of corrupt morals that somebody like Orrin Hatch has should be able to serve in the United States Senate for more than 30 years. This is a guy who holds deeply racist beliefs about American citizens. He has countless ties to lobbyists, specifically those in the health insurance and pharmaceutical industries, which is one of the main reasons that he thinks if you support Obama Care, you’re a dumb ass. He is corrupt to the core, and I personally can’t wait until the end of this year when this dumb ass is no longer a sitting US senator.