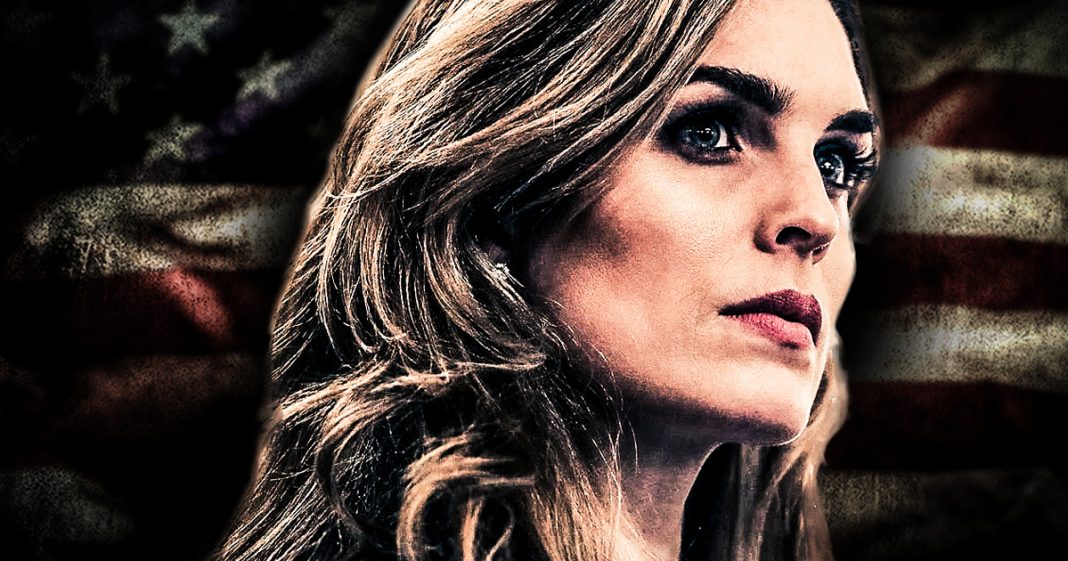 White House communications director and longtime Trump staffer Hope Hicks admitted during Congressional testimony this week that part of her job is to tell lies for the President. While she wasn’t completely clear about what lies she’s telling, this does raise very serious concerns about the credibility of Hicks and everyone else in the Trump White House. Ring of Fire’s Farron Cousins discusses this.

This week Hope Hicks, the White House communications director, testified before the House Intelligence Committee for more than nine hours, and during that time, during that testimony from Hope Hicks who’s been with Donald Trump since long before he even decided to run for president, she admitted that one of her jobs as White House communications director is to tell lies on behalf of the President of the United States.

So let’s forget for a moment that the Democrats on that committee who heard her testimony admitted that she stonewalled investigators the entire time. Let’s just focus on the fact that she admitted that it is her job to lie for the President of the United States. Again, let’s think back to when Donald Trump told us he was only going to hire the best people, the best people. Well, guess what? If your job is to lie on behalf of the president, you’re not the best people and neither is your boss, but more importantly, he told us he was going to drain the swamp. He was going to get rid of those swamp things in DC, bring some honesty and integrity.

Well, guess what? Your communications director, the person in charge of all of the messaging coming out of the White House, admitted that her job is to tell lies to the American public and to the media. That’s not draining the swamp. That’s not anything close to it. Hope Hicks is the White House swamp thing at this point, and the fact that she was so readily able and willing to admit that she lies on behalf of the president, what does that say about this woman’s credibility? What does it say about the credibility of the White House? How are the hard-core MAGA types going to respond to this when they were just told point-blank that they are being lied to.

My guess is that they’re not going to care. They probably deep down already knew they’re being lied to. They just wanted to go along with it because they want that wall. They want those Muslims out of this country and they don’t want gay people to buy cake. But Hope Hicks has just exposed the heart of the Trump administration. They are liars. They don’t tell us the truth. And at this point now, at least when they’re testifying to Congress, they have no problem admitting that that’s what they do.

This White House, Hope Hicks, Kellyanne Conway, Sarah Huckabee Sanders, Ben Carson, Rex Tillerson, Jeff Sessions, all of them, none of them can be trusted, and it all flows from the top. Donald Trump is the one that makes these people do these horrible things, and they’re horrible people for going along with it because they seem to enjoy it. They do it with a smile on their face, but it all flows from the top. Donald Trump wants Hope Hicks to lie for him, to continue to fleece his base, and to put a rosy picture on a White House that is absolutely falling apart.