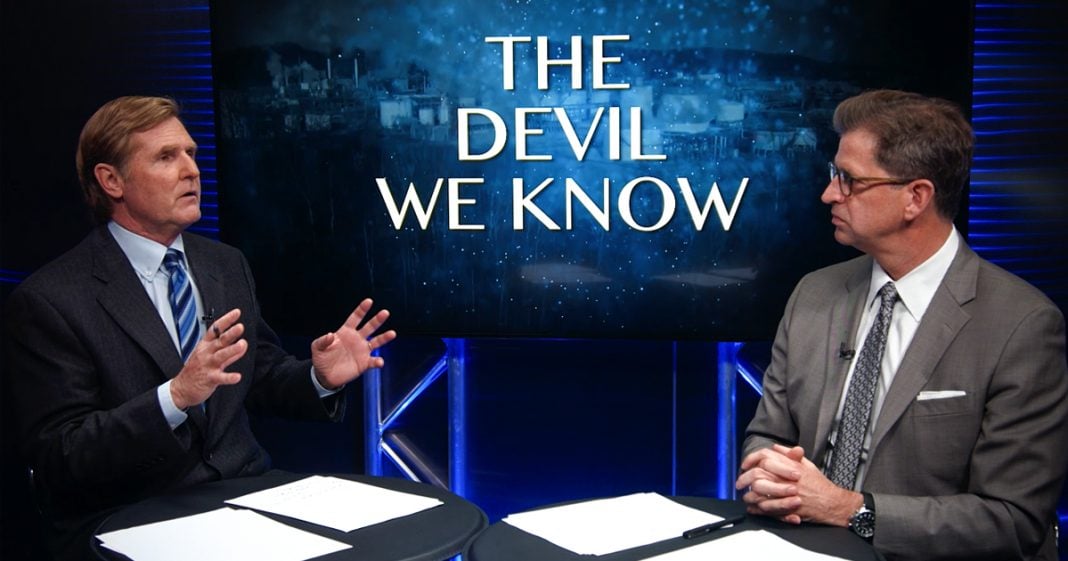 In the process of manufacturing Teflon DuPont pump millions of pounds of C8, a deadly toxin, directly into the Ohio River, and that caused cancer all up and down the river. America’s Lawyer Mike Papantonio and Attorney Peter Mougey discuss the details surrounding DuPont’s environmental destruction.

Learn more about this topic at thedevilweknow.com

Mike Papantonio: C8 is a product that the DuPont corporation used to manufacture Teflon. It’s in all of your Teflon pans as a matter of fact. In the process of manufacturing Teflon DuPont pump millions of pounds of C8, this toxin, this deadly toxin, directly into the Ohio River, and that caused cancer all up and down the river. 70,000 residents along the river drank this C8 toxin for decades. This went on for such a long time, but now, a new documentary has finally told the story that media was too afraid to tell for 50 years.

The reason, Peter, they didn’t tell the story is because DuPont spent so much money advertising with NBC, MSNBC, CBS, ABC, and so does 3M, which were the two major manufacturers. So, as we see so often with corporate media, it’s all about dollars. We don’t get news anymore.

Peter Mougey: It’s all filtered based on who’s going to cut a check to pay for the advertising.

Mike Papantonio: Yeah, exactly. What we’re seeing with the opioid industry right now, they’re starting to buy all kinds of advertisement so they can get more favorable stories on ABC, MSNBC, you know, all the network.

Peter Mougey: Kind of what BP after the oil spill. Let’s buy out full-page ads and run them, and then they get to kind of somewhat drive the content of what the ultimate consumer is seeing. It’s just driving the message home and Main Street America is letting them do it at the end of the day.

Mike Papantonio: Yeah, well this movie is the first time. Now, I was just at Sundance a couple of weeks-

Mike Papantonio: The film festival. And at the film festival, this thing premiered. Peter, the place was jam-packed. They had hundreds of people just on waiting line to try to get in. The film got a standing ovation.

Peter Mougey: On the C8-

Mike Papantonio: On the C8 film. They call it The Devil We know is the name of it. I’d recommend anybody to go take a look at this trailer. It’s called The Devil We Know. It’s done by a very, talented group, the same people who did Fed Up, which is one of the most downloaded movies.

Peter Mougey: It made Sundance. It’s usually a pretty heck of a quality piece.

Mike Papantonio: Yeah. So anyway, as I watch this, I think … the thing that occurred to me as I watch The Devil We Know, was that what if corporate media had started telling these stories decades before? Now understand, we tried cases up there, where I had people that had cancer. They had liver … They had kidney cancer. They had testicular cancer. They had all types of stomach illnesses that were debilitating, where part of their intestines had to be cut out. There were birth defects involved with this, but the reason … and let me just tell you something. We know for a fact that the national media, television media, was put on notice about this.

Mike Papantonio: And the only people that really picked it up were the people that the newspapers were or television right around where this was occurring, and at best, what we saw was national media do an eight-minute story, an eight story on something this bad, where they bought into DuPont’s argument. Understand, they didn’t just do the story. They’re thinking, “Okay, well, these people are advertisers for us, so let’s put the best spend on it.” They made it sound like it wasn’t a problem.

Peter Mougey: You see it the whole time. It doesn’t matter which industry it is, one after another, and without the litigation bar, without the trial lawyer bar, putting a spotlight on some of this stuff, you wouldn’t see a lot of this coming to the forefront. The stories are hidden behind confidentiality agreements by sums of money and buy-offs and enforcing the plaintiffs to sign non-disclosure agreements. When you go into court, you see … I mean, how many cases have you been in where these disgusting emails are internal exchanges about the corporate malfeasance, and they’re discussing it internally.

They know they’re hurting people. They know they’re pushing people to the end of the cliff. And then in order to get the emails in litigation, there’s protective orders in place. I just wish if we got a little more spotlight, like the documentary, you’d see a lot less of this.

Peter Mougey: I’d be nice to know that.

Mike Papantonio: Yeah, you’d want to know that. But the first judges that handled these cases said, “Oh no. We can’t let anybody hear this document.” It took a decade to where that document was out in the public, and in between, people are working with asbestos, they’re dying with asbestos. I’ve handled at least five cases, where they’ve been pharmaceutical cases or environmental cases, where you’ve had documents that where the defendant admits a) we did wrong, b) by doing wrong, we’ve put people’s health in jeopardy and people could die. And then we see some boneheaded judge say, “Oh wow. We got to put a protective order on this. We can’t let this go out and let anybody know about it.” What is your take?

Peter Mougey: It happens every day, and I do a lot more securities litigation. We literally got an email in today, that after four years of litigation, we got an email in today that had previously been withheld, had not been produced … sorry. It was inadvertently not produced, and there is a complete discussion, with senior level management in a multinational company admitting and discussing the problems that they caused internally with their clients knowing they caused the problem.

Mike Papantonio: The problem is always with money-

Peter Mougey: And they hid it from them.

Mike Papantonio: When you talk about the problems, tell us what the problems are with a mom-and-pop investor.

Peter Mougey: It’s corporate putting funds together and creating those funds with conflicts of interest, whining their own pockets and then selling them to mom-and-pop investors that have worked their whole lives, kind of like your asbestos story. Here’s somebody that’s worked their whole life butchers fishermen, taxicab drivers, socking money away, and big Wall Street company takes the money that they saved, sells them junk, crap, bottom-of-the-barrel stuff.

Mike Papantonio: They call it junk,

Peter Mougey: Well they don’t. They call it junk internally, but externally, it’s preservation of capital.

Peter Mougey: It’s safe for … yes. Internally, they call it junk, and then they sell it to these people. They discuss it internally, and here’s what the gist of the email was, it was absolutely disgusting. We’ve sold so much of this crap to our small client base that they can’t sell it. There’s no one to sell it to. It was restricted. If you’re going to sell it, I have to sell it to you. You have to sell it to me. What happens if there’s a push on the market? Well shockingly, of course, the price is going to tank. They discussed it internally, talked about pushing these mom-and-pops all the way to the cliff, and then they never told him there was a cliff there and let them fall off the edge.

Mike Papantonio: And who went to jail for that?

Peter Mougey: And nobody saw the email. Nobody’s seen it. I can’t sit here and say what company it was. Nobody’s gone to jail. Heck, no one’s even seen the email all because it’s covered up by these non-disclosures confidentiality that you’re routinely forced to enter into, and if someone would just let these documents get out, put a name on who those are, people would think twice about walking their mom-and-pop clients up to the cliff.