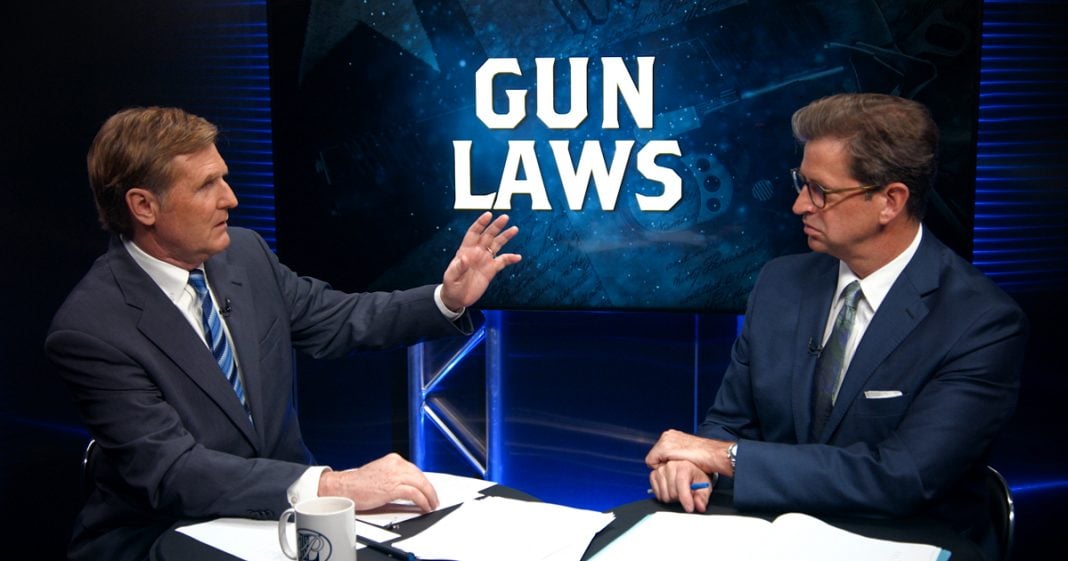 The U.S. Supreme Court has turned away a constitutional challenge brought by gun rights activists to a California law imposing a 10-day waiting period for the purchase of firearms, intended to guard against impulsive violence and suicides. Ring of Fire’s Mike Papantonio and Peter Mougey discuss this.

Mike Papantonio: The US Supreme Court turned away the constitutional challenge that was brought by gun rights activists in California. It’s supposed to impose a 10 … We’re at imposing a 10 day waiting period for the purchase of firearms. I mean, that’s the least you can do, give them 10 days and it was intended to guard against impulsive violence. Husband gets mad at wife says, “Well, I’ll teach you.” Goes out, buys a gun. The 10 day cooling off period, it makes perfect sense. So what I love is the Supreme Court turned that away. They said, “Okay, we’re not gonna mess with that law. We’re not even gonna look at that law.” Frankly, it’s the least we could be doing when we talk about gun laws, what’s your take?

Peter Mougey: Well, what’s scary to me is that Justice Thomas, one of the Supreme Court justices that turned down the decision, dissented from the court case and he said that … He wrote his dissent that the Second Amendment is the disfavored right in this court. Now it’s just, it’s mind boggling to me-

Mike Papantonio: Can you imagine? A disfavored right.

Peter Mougey: I mean, my daughter is in one of the state universities and they actually showed up in force in front of the president’s office at the university to champion that there was some cooling off period. And can you imagine who in the world would not be in favor of a 10 day waiting period? What in your right … And here we have a Supreme Court justice saying it’s a right. We’re not taking away the right. We’re not taking away the guns. We’re just saying, hey, just give it 10 days before you go buy one of these-

Mike Papantonio: It’s hardly ever the media that accomplishes it. It usually is taking people to court, suing them, taking their money away and saying, “You know what? If you’re going to conduct business like this, we’re going to sue you.” So friend of ours, Perry Whites, brings up in New York, brings a lawsuit, and the lawsuit had to do with the fact that you had a manufacturer of a gun that was made for no other purpose just to go out and commit murder and that’s what it was about. It was cheap. You could get it easily. And as matter of fact, he was even finding documents that showed that that was part of the reason they wanted to produce this gun. So what does he do? He brings a lawsuit against the manufacturers and Congress during the time that the manufacturing lawsuit is pending, passes a law that honestly states that you can’t sue a gun manufacturer for that type of thing. And people are completely unaware of this.

You understand, the only time I’ve seen a lawsuit that’s worked against the gun manufacturers is with Remington. Remington had a barrel that was exploding. Okay, well, you know, that’s different. That’s not just a pure gun defect. That’s a-

Mike Papantonio: So that’s different from the kind of lawsuit that Perry was trying to bring and say, “Look, we ought to be able to sue this company because we know what they’re doing.”

Mike Papantonio: They’re just creating something to kill somebody with-

Mike Papantonio: … and we want this thing off the market. It’s called Saturday night-

Mike Papantonio: How do you change things without lawsuit?

Peter Mougey: You have to. I mean, quite frankly, the reason why the judicial branch was created is to give a voice to the small people. What we have driving this country is we have PACs, we have big money corporations. They’re driving public policy, they’re driving new legislation. In order to get things done, it has to be through the judicial system. I’ll tell you, I hate to go back to the story again, but I mentioned this one of the last times we got together is the opiate epidemic. This has gone on for 15 or 20 years. Nobody did anything. The DEA’s sitting there, everybody’s sitting there. All of a sudden it’s not even on the front page of the press and I know you’ve hit this point before. Why? Because all these big companies, big pharma spending hundreds of millions of dollars in-

Mike Papantonio: Okay. You see how many times … If you’re watching this, I want you to look and tell me if you can ever find the media saying the obvious, and that is that without our ability to bring lawsuits against these companies and take their money away, the media doesn’t even get the connections. They don’t even … They do, but they won’t talk about the fact the only place you get anything done as in a courtroom, especially when you’re dealing with criminals like we have to deal with every day. So the point is this, that legislation is not going to change anything. The media, they could write front page every day. It’s not gonna change anything. The only thing that changes something is when you take these freaks into a courtroom and they get hit for a billion dollars and then they say, “You know what? This is risky business. We can’t do it.”

Peter Mougey: You’re with the common man. At the end of the day, you’re wondering if your state is one of those states that has judges running for office or you see these Supreme Court justices being nominated. Well, why doesn’t … Why does that impact me? Actually, the judicial officers, the courts, the judges are probably the biggest necessary stalwart against corporate America to ensure that the common man, the regular person’s being protected by big companies because they’re the ones that [crosstalk 00:06:03]

Mike Papantonio: A jury trial, yeah. The jury trial’s the only place you can do this.