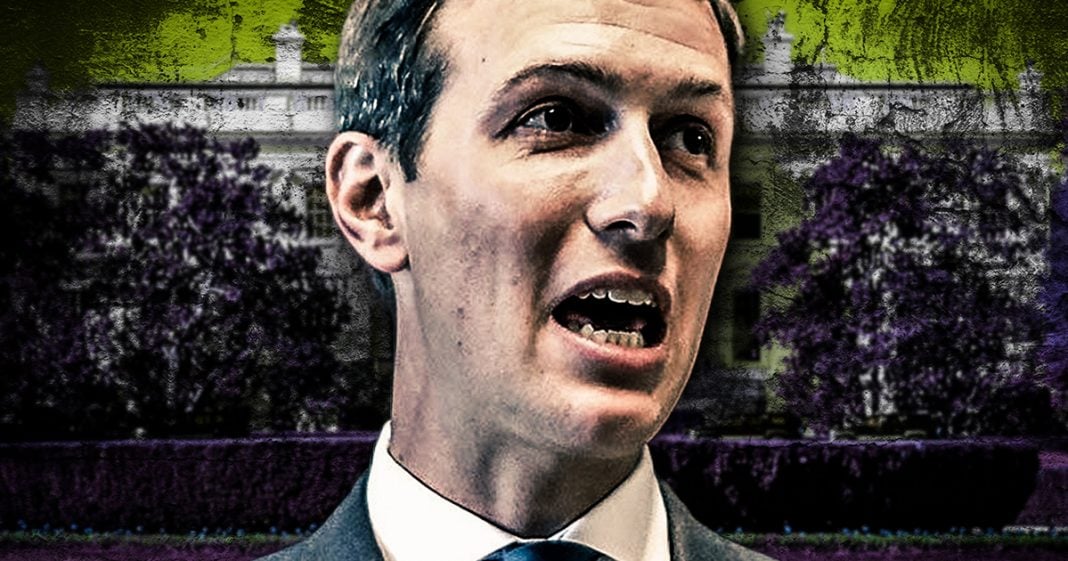 Jared Kushner, son-in-law to President Trump, has had a really bad week, and its only halfway over at this point. Kushner has been slapped with an ethics complaint by a watchdog organization for alleged violations of the Hatch Act; he’s had his security clearance downgraded; and now a new report says that foreign agents attempted to influence him. Ring of Fire’s Farron Cousins explains why Kushner should immediately be removed from the White House.

Jared Kushner, Donald Trump’s son-in-law and White House staffer, is having a really, really bad week and we’re still only halfway through this week. It started off with Jared Kushner losing his all-access security clearance, and instead being given a restricted security clearance which means he is no longer able to access highly top-secret documents of the U.S. government. Now, this should have happened about a year ago, because the guy consistently lied on his security clearance forms, but it happened. Now, he shouldn’t have any kind of security clearance, but at least they’ve scaled it back a little bit.

That was Problem Number One for Jared Kushner. Problem Number Two is a complaint filed by Citizens for Responsibility and Ethics in Washington, that claims that Jared Kushner violated the Hatch Act with a recent Donald Trump Campaign 2020 email, where Jared Kushner gave a quote and identified himself with his official title within the White House. That is illegal. That is a clear violation of the Hatch Act, and so CREW has filed a complaint saying somebody needs to look into this and uphold the law that Jared Kushner very clearly, and very obviously, broke.

But the third big problem for Jared Kushner in the last few days, is a report by the Washington Post saying that at least four countries identified Jared Kushner as a manipulable person within the Trump administration. These four countries, Israel, China, the United Arab Emirates and Mexico, identified Kushner as a guy within the Trump administration that they could manipulate. That they could get to, change his opinions on things, or maybe use him to their own end, because he was such a sucker.

That is what these countries saw, and that is what most people in this country see as well when they look at Jared Kushner. A guy that’s not very bright. A guy that doesn’t understand what the hell he’s doing in the White House. And a guy that would probably take suggestions from anyone, anywhere, at any time, in any place. And these other countries recognized it.

So, the question remains. Why is Jared Kushner even in this Trump administration at all? You know, he told us he was only going to hire the best people and here we have a guy who’s facing massive ethics complaints. He’s the subject of two separate investigations about his finances, just lost his full-time security clearance, and he’s been identified by foreign countries as a guy that they can manipulate to get their way within our federal government.