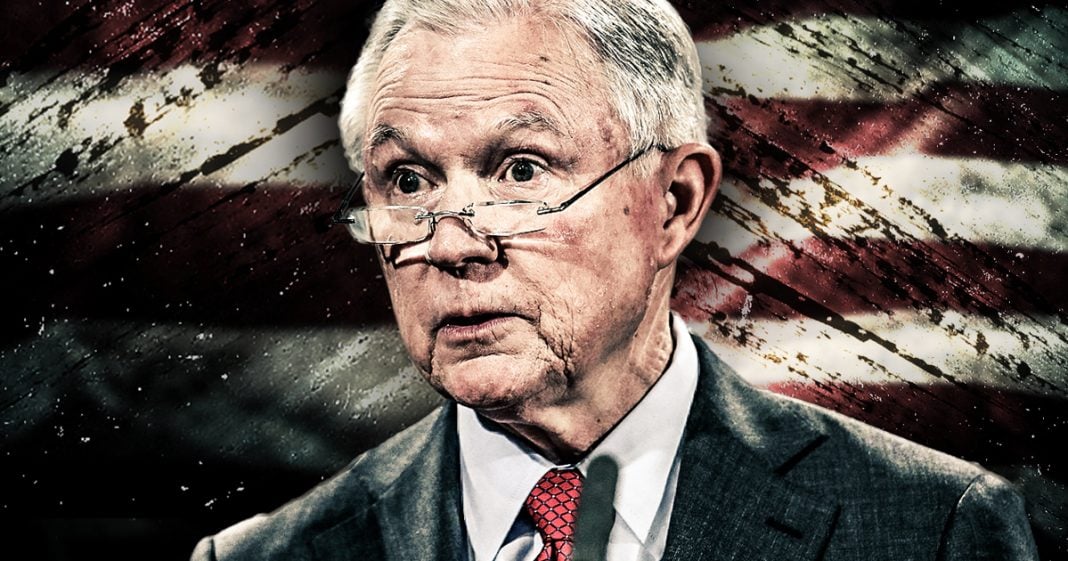 Jeff Sessions has had a rocky relationship with Donald Trump from the start of this administration, but he appears to be doing everything he can to mend that relationship. This week, Sessions announced that he was ordering the Inspector General at the DOJ to begin an investigation into “anti-Trump bias” at the DOJ, a move that shows that this country has already descended into full-blown Fascism. Ring of Fire’s Farron Cousins explains.

Proving that America is further descending into full-blown fascism, Jeff Sessions, the Attorney General of the United States, has announced that he is going to launch an investigation into anti-Trump bias within the Department of Justice of the United States. According to Jeff Sessions, what he said at a Q&A earlier this week, he was going to have the Inspector General start looking into the anti-Trump bias that may or may not have been the cause of the ongoing investigations into the Trump administration.

Now, as far as we’ve seen, all of the available evidence says that no, that’s just a byproduct of people in the FBI or the DOJ actually having their own opinions about politics. It did not dictate their investigations. There’s absolutely no evidence to suggest that these people started these investigations because they don’t like Trump, but nonetheless, Jeff Sessions wants to take the DOJ into a new era of pure fascism where if you don’t like the President, you risk losing your job. That’s what’s happening right now.

This isn’t about finding out the truth about this investigation. This is about digging into the personal lives of people within the Department of Justice. He wants to get rid of people who do not like Donald Trump, because Jeff Sessions believes that’s going to help curry favor for him with the President. It’s no secret that Jeff Sessions and Donald Trump have had a bit of a tumultuous relationship since Jeff Sessions came into office last year, but this is pandering in the extreme, and it is putting the United States closer and closer towards fascism.

In fact, it’s not even putting us closer to it. We’re in it at this point. Donald Trump’s grand military parade that he wants to have, that’s fascism. The constant attacks on the press, that’s fascism. The attacks on institutes of higher education, that’s fascism. What Jeff Sessions is doing at the Department of Justice is fascism. And what’s really interesting about this is that Donald Trump tweeted out Wednesday morning that, “Why is Jeff Sessions doing this? I don’t understand it. The Inspector General’s an Obama guy. Of course he’s not going to find anything.”

Well, Trump, if you’ve got a problem with it, you could ask Jeff Sessions why he’s doing it. You could pick up the phone and call him. You could have one of your aides go get him and bring him to your office, and you could ask him in person instead of posing an idiotic rhetorical question on Twitter that you already know the answer to. He’s doing it because one, either you told him to and you’re trying to make it look like you didn’t, which is what I believe, or two, because he’s very, very sorry that he had to recuse himself from the investigation, so now he’s trying to curry favor with you by doing this for you.

This isn’t about justice. This isn’t about getting to the bottom of things. This is about purging people from the DOJ offices who do not like President Trump, and that, ladies and gentlemen, is what fascist regimes do.