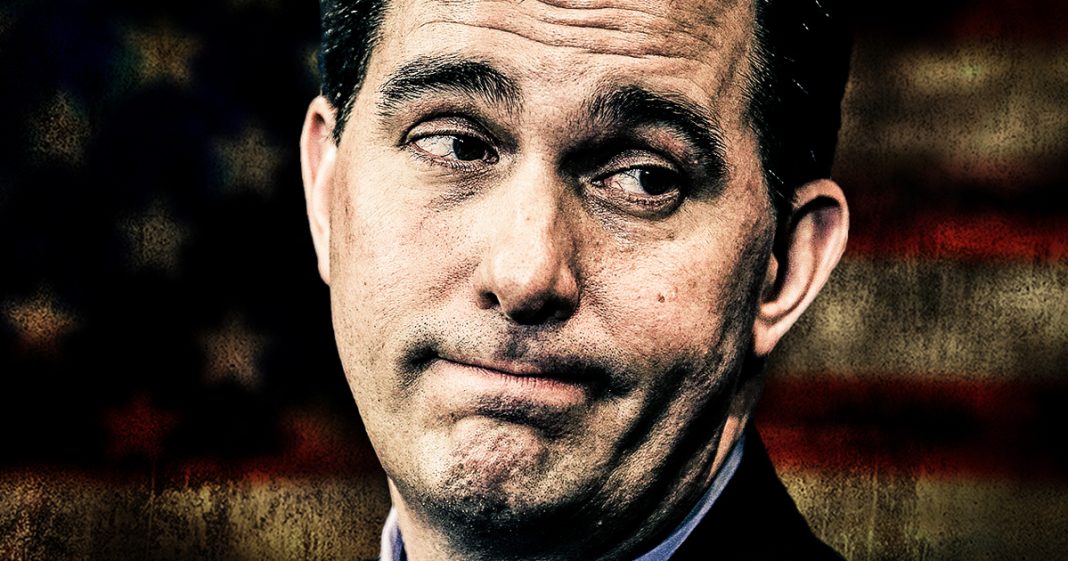 Republican Wisconsin governor Scott Walker is refusing to hold special elections to fill state Senate seats, likely because he understands that his party is in danger of losing those seats. Now he’s being sued by former Attorney General Eric Holder for holding democracy hostage. This is what Republicans want – if they can’t keep you from voting with their repressive voter ID laws, they’ll just cancel the elections entirely. Ring of Fire’s Farron Cousins discusses this.

Well, now Scott Walker has found himself on the wrong end of a lawsuit brought by Eric Holder, the former attorney general of the United States, and several Democrats serving in the state legislature. They want Scott Walker to uphold the state constitution and have elections when there are open seats. That’s the rule, but Scott Walker is so terrified about losing those seats that he decided screw it, we’re going to get rid of democracy in the state of Wisconsin. I’m so terrified that we’re going to lose power, and that God forbid people might actually be represented by people who understand what they want, that we’re just not going to do it, so I guess that’s just the new Republican thing now. If they can’t keep you from voting with their voter ID laws and voter roll purges, they’ll just get rid of elections altogether, because whatever it takes to keep Democrats out of office, right?

I’m sure that’s what the Koch brothers, who have bankrolled Scott Walker’s entire career, I’m sure that that’s what they want, and other Republicans around the country are paying attention to this. Not that long ago, the state of Alabama, following the election of Doug Jones to the US Senate, voted against ever having special elections, so now if there’s an opening, the Republican governor of that state’ll just get to appoint it. The people no longer have a say, and they’re trying to do the same thing in Wisconsin right now, and if it works there like it works in Alabama, we’re going to see this popping up in states all over this country. Republicans have gotten their butts handed to them in special elections for the last 12 months, and there is no end in sight for that, and that’s why cowards like Scott Walker are doing everything that they can to prevent any more of these special elections from taking place. It’s illegal. It’s disgusting. It’s immoral, but that is exactly what we’ve come to expect from Republican leaders.