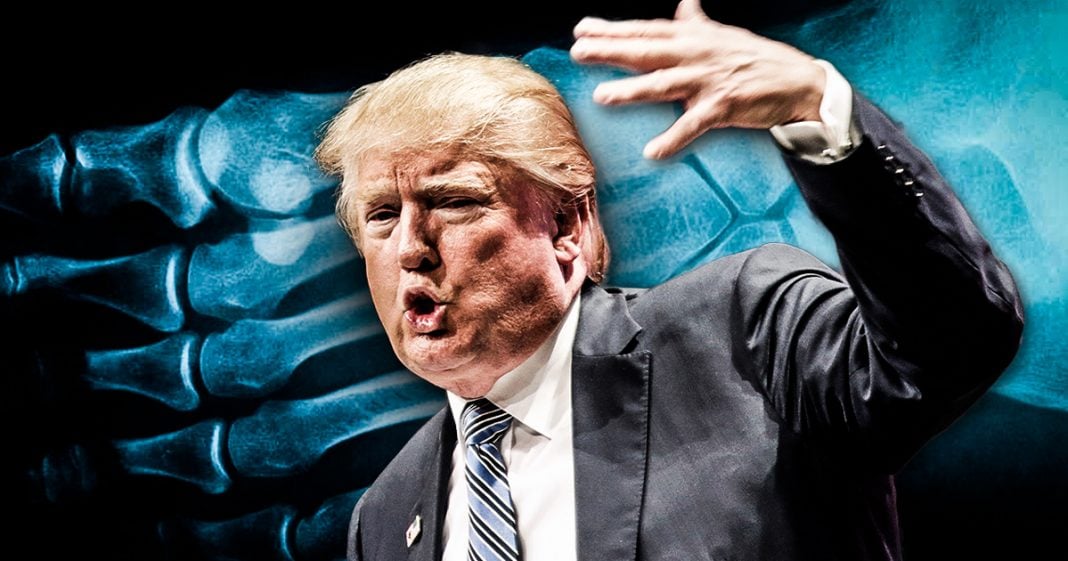 During a meeting with Republican governors on Monday, Donald Trump claimed that he would have almost certainly run into Marjory Stoneman Douglas High School to stop the recent school shooting, even if he didn’t have a weapon on him. This is the same man who said that avoiding STDs was his personal Vietnam, after getting several deferments from service for allegedly having bone spurs in his feet. Ring of Fire’s Farron Cousins discusses this.

According to Donald Trump himself, had he been present at Marjory Stoneman Douglas High School in Parkland, Florida, he absolutely would have run into that school to take on that shooter by himself, even if he didn’t have a weapon on him. That is what Donald Trump told a gathering of Republican governors at the White House on Monday of this week. The very same man who received several deferments from Vietnam for bone spurs in his feet says he would have run into that school, no weapon at all, and taken down that shooter. The same man who says that avoiding STDs was his own personal Vietnam, and the fact that he had sex with so many women and never got AIDS, that is an admirable thing. The guy who’s lived his entire life in gated communities, the man who has private security around him 24/7, even before he ran for president, thinks that he is some big macho, action hero tough guy that he would run towards the gunfire and take on that shooter. At least, that’s the image that Donald Trump wants to project, and it’s an image that a lot of Republican politicians have tried to project for themselves over the years.

It’s one that has absolutely no basis in reality. Donald Trump was given the opportunity to charge at people with guns to protect his fellow American citizens. He failed to do it. He was too scared. He’d rather have other people’s kids go do that, because he was such a coward, and he still is. Nothing’s changed with him. He would not have run into that school. He wouldn’t have run into that school if his own children were in there and their lives were endangered. That is how selfish and weak this man truly is. The reason he’s trying to push this narrative is because they’re trying to go after the officer who did not go into the school to go after the shooter, trying to say that they’re so much tougher, they’re so much better than this guy. Meanwhile, Pam Bondi, Attorney General of the state of Florida, won’t even say whether or not that officer was given the order to stand down and not confront the shooter. For all we know, that may have come from the Republican government of Florida telling him to not go in there.

The bottom line is that Donald Trump wants to project this macho image for his base, and they absolutely believe it. The truth is that any opportunity this man has ever had in his life to stand up and be brave, he has backed down from it. Let’s not forget, this is the same man who freaked out when he was trying to do a photo shoot with a bald eagle and it got a little too close to him. The same man who almost dove offstage when a loud noise happened while he was giving a speech. He’s not a hero. He’s not a brave guy, and he sure as hell isn’t someone who would ever run towards gunfire to save someone else’s life.