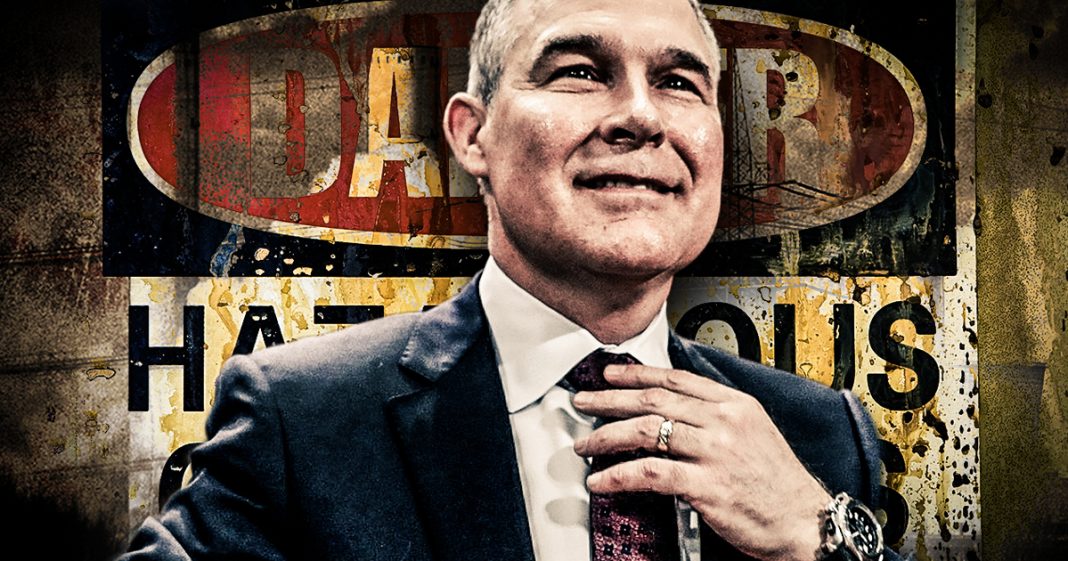 The EPA is in the middle of a massive “restructuring” program that will mark the end of several vital services the agency performs. Up first on the chopping block is a department within the agency that studies the effects of toxic chemicals from corporations on children’s health, meaning that the EPA no longer wants to know how badly corporations are poisoning our children. Ring of Fire’s Farron Cousins discusses this.

Scott Pruitt, the head of the Environmental Protection Agency, has done everything in his power to make sure that corporations can get away with poisoning, polluting anyone in this country that they feel like poisoning. Recently, the EPA announced that they were going to go through a massive restructuring, a reorganization of their entire agency. Part of that reorganization is to get rid of the National Center for Environmental Research. It is an organization within the agency that the Trump budget actually tried to cut out completely earlier this year, although they did eventually decide to give them a little bit of money. Now the EPA says, “No, to hell with it, we’re going to get rid of the entire agency.”

The big question is, why does that matter? Why should anybody care about this? Here’s the answer. That particular organization, the National Center for Environmental Research, do you know what one of their main jobs is? One of their main jobs is to study the effects of toxic chemicals on the health of children in the United States. These are toxic chemicals being emitted, being dumped, and being put into the air by corporate America. Now, that won’t happen. The EPA just said, “Screw it, we don’t care if your children get poisoned. We don’t care if our children get poisoned. We’re just going to let corporations do what corporations want to do. We’re not going to look at the effects. We’re not going to hold them accountable. We’re just going to keep going and dealing with these Freedom of Information Act requests, because that is what this new organization is going to be about.” They just want to have a whole office that’s going to deal with these FOIA requests, not studying the health effects of toxic chemicals on our children.

Our children, and pretty much everybody in this country, because let’s be honest, anybody can be poisoned. We’re not safe in this country anymore. Our children are not safe when they walk into school. Our children are not safe when they get water from the sink. They’re not safe anywhere at this point, and 100% of it is due to Republican policies. We have seen children poisoned with lead in the water, with toxic chemicals in rivers and streams, with glyphosate, with CO2 emissions, with mercury, with arsenic, with cadmium, with chromium, all kinds of toxins entering the bodies of our children, who are disproportionately more affected by these chemicals than adults, and the EPA says, “That’s just fine with us. We don’t want to think about it. We don’t want to look at it. We don’t want to study it. We’re just going to let these corporations continue dumping, because we purged all the scientists from the organization and now we’re run by the heads of industry.” God knows, those people don’t want us looking into what their chemicals are doing to our children.