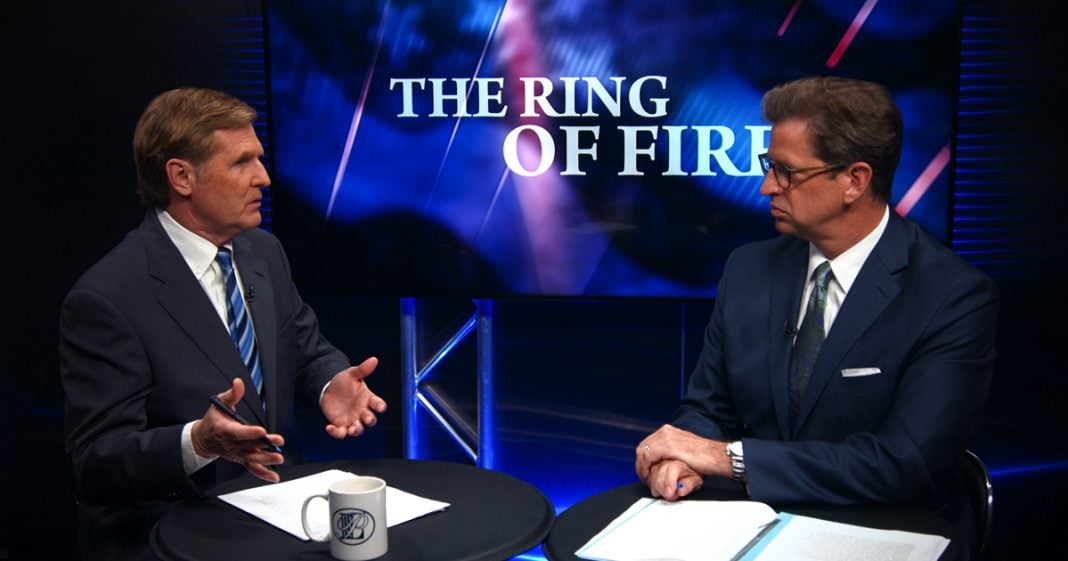 Mike Papantonio and Peter Mougey discuss a ground-breaking settlement between Chiquita International and the families who wanted the company held responsible for the deaths of their relatives in Columbia. Chiquita previously pleaded guilty to giving money to Colombian terrorist groups.

Mike Papantonio: This is a story where Chiquita International reached a settlement with families of six Americans who were killed by the Columbia FARC terrorist group.

Peter Mougey: There’s a blast from the past.

Mike Papantonio: Yeah. It is. It sounds a lot like some of the stories we’ve heard, whether it’s Chevron, Shell, some of the big companies that have been caught up in this very same kind of thing. But here, in this case, you had Chiquita report that they paid well in excess of $200,000.

Mike Papantonio: They’re paying for muscle. What is your take on it? First of all, this isn’t close to being enough. Here again, how do you pay for murder and there be nothing more serious than this. Give me your take on it.

Peter Mougey: Well, it was a long period of time, that this story’s been kind of leaking out for over a decade that Chiquita paid close to $2 million over time, where they were funding-

Peter Mougey: Over time that $1.7 million. This is in the infancy of this organization, the beginning when they were cash starved. What did they do with that money over time? They bought more ammo. They bought more guns. They better armed themselves. They just increased their operations. So it fed, they fed that organization until they started to go in. I think it was … Like you said, it was five missionaries and a geologist kidnapped, and run out of their own home. What was gut wrenching to me … This was back in the early 90s. This mother was 23 years old. They barge into her house, two young kids were asleep. They dragged one of the missionaries out, handcuffed him, took him off into the jungle, never saw him again.

What do they do? They made ransoms. They made ransoms because Chiquita’s right there paying. Nobody paid in this instance. The guy ends up getting executed. Never sees him again. My heart went out to this family. The mother said, “It was the hardest time was Christmas.” Every year, Christmastime, the girls would ask that their Dad would come home. They never got any remains.

Here’s Chiquita, behind the scenes paying money, a lot of money over time, funding this organization.

Mike Papantonio: Here’s what I think is really … Chiquita said, “Oh, gee whiz, we funded both sides. There was both sides that we had to pay money to, to keep our … ” Their argument was, “To keep our employees safe,” which is an absolute crazy … It’s absolute crazy talk. What the money was paid for was because you would have something that Chiquita would do. They would use pesticides that would affect people in the area. They would take property of people in the area. They were doing things that citizens around their operation would object to. The missionaries would, of course, side with these people.

What Chiquita said is, “Well, okay, we’re going to pay out this money.” Now, follow this just a second. It’s one thing to say … And they said, “Oh, we had no idea.” Really? The first year … Let’s say over time, they pay out in excess a million dollars, which they did. So they pay out an excess … They make the first payment. Let’s say it’s $200,000 that they pay out. The next two weeks after they pay the money, something happens. Arms are brought in. You start seeing, as people start dying, things start escalating. Okay, that’s the first time.

Then they pay out another $500,000, and it escalates even more. Well, it doesn’t take a rocket scientist for the people in management at Chiquita to understand clearly what’s happening.

Peter Mougey: Throwing gas on the fire. It just got worse and worse and worse. It escalated and people lost their lives. That’s a huge international company that is feeding a terrorist organization.

Mike Papantonio: It’s not the first time we’ve heard this story. This is a story that’s repeated-

Peter Mougey: This is part two of the story.

Mike Papantonio: Yeah, it is part two of the story. But it’s something that’s repeated itself on time and time. Now here’s the real twist on it. Now, this only happened because you had the Antiterrorism Act that came into being. Thank goodness we have ways that we can deal, with tools for dealing with this type of terrorism. That’s exactly what it is. They’re funding terrorists.

As you are working on the same case I’m working on, our law firm’s working on the case, where we’re finding that banks are washing money for terrorists. The money goes from UBS. It’s washed. Then it ends up on the street in the hands of terrorists. We’re representing people, of course, who have been victims of terrorism. That’s where this ends. We’re suing the banks because they understand clearly what’s happening with the money. Just like Chiquita understood here what’s-

Peter Mougey: Well, if you were trying to connect the dot [inaudible 00:05:11] on those two stories, I think what’s interesting is that without Chiquita, without the banks washing the money, you wouldn’t have these problems. We wouldn’t have as many military folks coming home without limbs, and without eyes and without-

Mike Papantonio: Or missionaries that lose their-

Peter Mougey: Or families that are widowed and kids that grow up without a parent. The travesty of this is big corporate America taking the profits, taking and paying off terrorists to keep themselves and their bottom lines and promote their goods at the expense of regular people.

Mike Papantonio: It’s all about money at the end of the day. So what, we lose missionaries. So what-

Peter Mougey: When we get 100s of millions of dollars in deposits in from these terrorist organizations, we’re going to wash it up, scrub it up. Nobody’s going to know where it’s coming through or that it’s going back to Iran-

Mike Papantonio: Follow this. Again, this is only happening because of the Antiterrorism Act. Now, what I predict is you’re going to see banks and companies like Chiquita doing everything they can to make this Antiterrorism Act go away.