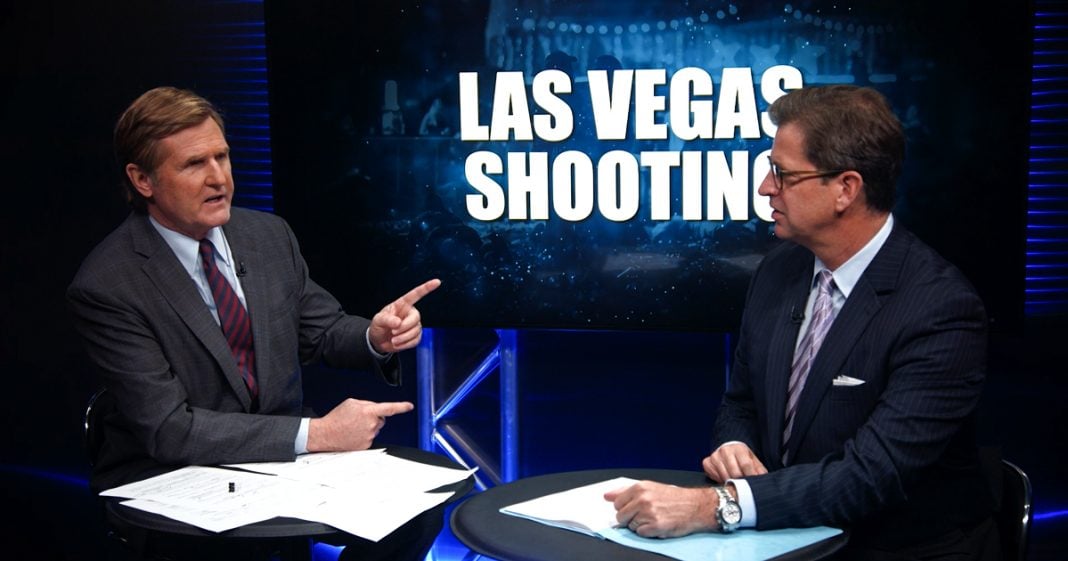 On the evening of October 1st, a gunman positioned in a room at the Mandalay Bay hotel and casino in Las Vegas began firing semi-automatic weapons from his hotel window down into a crowd below that had gathered for a music festival. The videos from the tragedy shocked the nation, as thousands of terrified people ran for their lives in between rounds of gun fire. In the end, the shooter – 64-year-old Stephen Paddock – killed 58 people and injured more than 500… But there’s a lot more to the story, including the failures of the security staff at the hotel where Paddock was located, the concert promoters, and a host of others, and that’s why lawsuits are being filed by the victims of this tragedy.

Mike Papantonio: On the evening of October 1st, a gunman positioned in a room at the Mandalay Bay Hotel and Casino in Las Vegas started firing a semi-automatic weapons from his hotel or window down into a crowd below that had gathered for a music festival. The videos from the tragedy shocked the nation as thousands of terrified people ran for their lives in between rounds of gunfire. In the end, the shooter, 64-year-old Stephen Paddock, killed 58 people and injured more than 500.

But there’s a lot more to this story that the media simply doesn’t grab most of the time, including the failures of the security staff at the hotel where Paddock was located, the concert promoters and the host of others, and that’s why lawsuits are being filed by the victims of this tragedy. Peter, again, to me, what I’m always amazed at is sometimes how reporters are in the midst of … they’re hearing the facts, but they don’t understand how the facts come together. Why is it that there may be multiple parties involved that are all, to some degree, responsible for what happened here? I mean, something as basic as these people being shot at and not being able to have any kind of escape route … Some of them were pinned in between fences, and the shooter’s on the 32nd floor-

Peter Mougey: There was metal barricades-

Peter Mougey: … so you couldn’t get out.

Peter Mougey: They couldn’t get out.

Mike Papantonio: Yeah, they could not get out. What is your-

Peter Mougey: It’s a goldfish in a-

Mike Papantonio: What is your take on this?

Peter Mougey: Well, the lawsuits have been filed. I think this is one of the biggest filings to date, at least in the last few months, that … There have been about 400 of these cases getting filed against both the hotel for the lack of security, the lack of proper training, the employees, and then also the concert promoters because the ingress and egress … People couldn’t get out. They had metal barricades kind of blocking them in.

Mike Papantonio: Let’s just talk about the employees of the hotel.

Mike Papantonio: Okay? First of all, the story we have heard is “Well, he had a do-not-disturb sign on his door for seven days. He was using the-

Mike Papantonio: … service elevator.” Well, here’s what happens in a setting like that. Again, this is not something that’s talked about. It’s almost like some of these reporters are living in a different world. But what ends up happening is a guy like Paddock shows up, he’s a high roller in Vegas. Right?

Mike Papantonio: Shows up, he starts spreading money around. Okay? The people who take care of his room, he spreads money around. Everybody gets money. They get chips. That’s how this guy is able to do things like use service elevators. That’s why he was regarded as such a congenial nice guy before all this started, because money is spread around. You and I do a program … We do a program twice a year, we have for 18 years, out in Vegas, either at Wynn Hotel or Bellagio. We see it firsthand. Money talks out there, and so these employees get sucked into that. What’s your take?

Peter Mougey: Well, why in the world would you allow a guest to use the service elevator? There’s absolutely no reason to use the service elevator. To let a guest use it and then carrying large bags, that should’ve been a red flag, a couple of issues like that. I mean, seven days with the do-not-disturb sign? One thing that’s bothering me about this is when he knocks out the windows, when he tries to get access to shoot out with these scope rifles on people that are locked in like goldfish in a barrel essentially, I wonder what happened, and I haven’t heard this in the press yet, I wonder what happened when the window got knocked out or cut out so he had-

Mike Papantonio: Yeah, was there-

Peter Mougey: Was there alarm that went off? Did somebody get notified right away? What took them so long to get up there? He had barricaded the door. There’s a lot of things that were scary-

Mike Papantonio: Well, let’s micromanage it a little bit more, the things that he did. He barricaded a door.

Mike Papantonio: He had time to set up cameras out in the hallway. That’s not something you do just an hour before-

Peter Mougey: … fast … like in the room service delivery-

Peter Mougey: … he had those carts parked outside with cameras to see down the hall when people were coming. There was a whole series of events like that. You’re right, he had those set up.

Mike Papantonio: When you first heard it … Of course the defense of it, “Oh, it was just one crazy man,” well, yeah, he was a crazy man. But when you’re in the business of dealing with people and you go through the same routine every day and you’re in that kind of atmosphere, employees have to be specially trained. They have to have some sense about the idea. There’s been a do-not-disturb sign on the door for seven days. Some cat is using the service elevator, bringing up huge boxes-

Peter Mougey: Right. It’s not like this is a new phenomenon either. What’s the name of the school where they had the shooter in the bell tower back in 1970s-

Peter Mougey: I know this isn’t something that happens every day but it’s not like this is just an epiphany, like it’s the first time it’s ever happened.

Mike Papantonio: Yeah, exactly. The point is there, when you walk down that main drag in Vegas, you realize that every one of those places is bell tower. You realize it’s just a matter of when something like this happens. So 58 dead, 58 families affected with dead relatives-

Peter Mougey: Think about how many guns and how much ammo you had to bring up without anybody noticing to get off that many rounds to hurt that many people. You’re talking about a lot of stuff to bring in to that hotel and get upstairs with no one noticing. I mean, think about how many rounds he had to shoot off. That’s one thing that, when security went in, you heard over and over, was just how many rounds were all over the floor, the shells, and how many guns he had up there.

Mike Papantonio: And your point being you don’t get rounds up in secret, you get rounds up in big boxes. You get equipment. These types of weapons that he had, he had to bring up boxes in the service … When they start really deposing people, they’re going to find that this guy spread around chips. That’s how the world in Vegas works. He paid the people cleaning his room. He paid the people in the hallways. He paid people downstairs. He paid people that allowed him access through the service elevate. That’s how this entire thing works. I got to tell you something, there is a responsibility from a legal standpoint, purely legal analysis, he was an invitee. As an invitee in a place like that, the standard of due diligence-

Mike Papantonio: … that that landowner has is huge. Anyway, we’re going to … Take a look at october1.law. It talks about this in great details. You can get stories that the media is simply incapable of reporting for one reason or another. It’s almost like they don’t think things through, they don’t actually go out there and see how it really works.