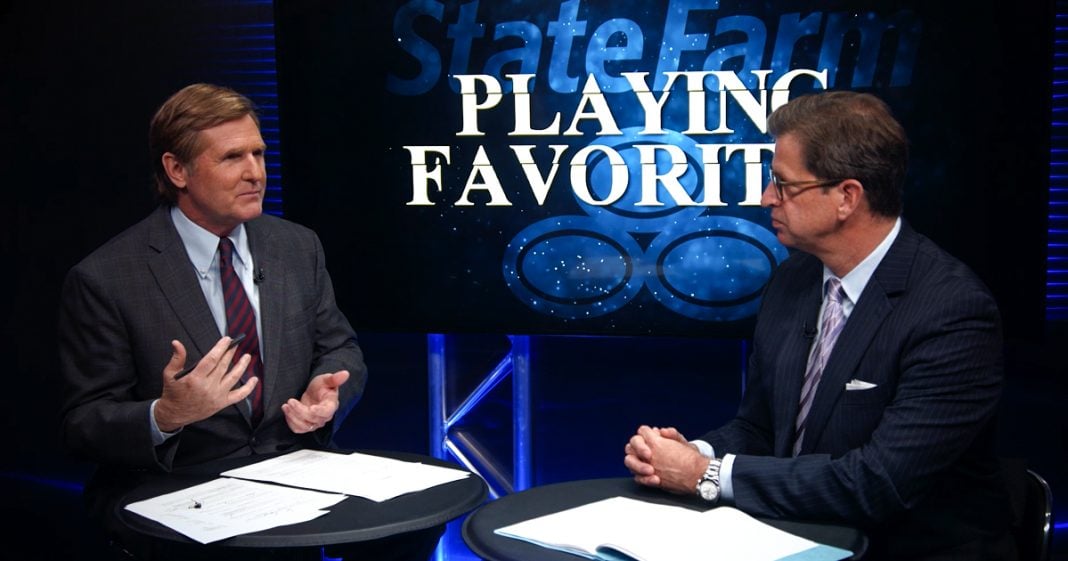 The State Farm insurance is in hot water as new evidence has emerged showing that they funneled money into the campaign of a judge who threw out a billion dollar judgement against the company. Ring of Fire’s Mike Papantonio and Peter Mougey discuss this.

Mike Papantonio: The State Farm Insurance Company is in hot water as new evidence has emerged, showing that they funneled money into the campaign of a judge who threw out, just happened to have thrown out a billion dollar judgment against the company. So what they do, Peter? They start pumping more than $4 million into a campaign on PR, to try to change all this, and so they do get their judge elected, right?

Peter Mougey: Oh they do. Not only is he elected, but he ends up being the Chief Justice of the Illinois Supreme Court.

Mike Papantonio: Let me point out, that’s its state court-

Mike Papantonio: -because this now a federal court looking at it. But tell us what happened here. These facts are crazy.

Mike Papantonio: What’s so interesting, when you understand what this company was hit for, State Farm was hit for selling parts to cars that were sub-standard parts. In other words, they would say to a body shop, they’d have these scams with body shops, and the body shop would take a part that should have cost a $100, but it cost $50 because it wasn’t the right part, it was a sub-standard part.

And so they caught them doing this, and so jury comes back and does what you would expect, they get hammered.

Peter Mougey: A billion dollars, I mean, crazy numbers. So we can get that unwound by pumping money into a campaign for one of the elected officials. Only in Illinois, I mean it-

Mike Papantonio: Well let me just tell you, this federal judge Herndon, he’s a judge you do not play with. I’ve been in front of him, we’ve been on trial in front of him all the way back to the Yaz cases. He is a serious business federal judge, and my call on this is this company’s in bad shape because this federal judge that State Farm tried to get the federal case dismissed, because what had happened is, there was a RICO kind of action brought against State Farm for trying to pump money into this judge, to get the judge to dismiss the case.

Peter Mougey: It’s organized crime, they file the case, it’s a RICO case, and he said, “No, we’re gonna let it stand.”

Mike Papantonio: So, the Federal judge says, “I want to hear more about this.”

Peter Mougey: “This has got legs.” He thinks, so-

Mike Papantonio: He refused to dismiss the case.

Peter Mougey: Throw it out.

Mike Papantonio: I think State Farm’s in trouble, and really, as you look at this, this judge should be in very serious trouble as these facts come out.