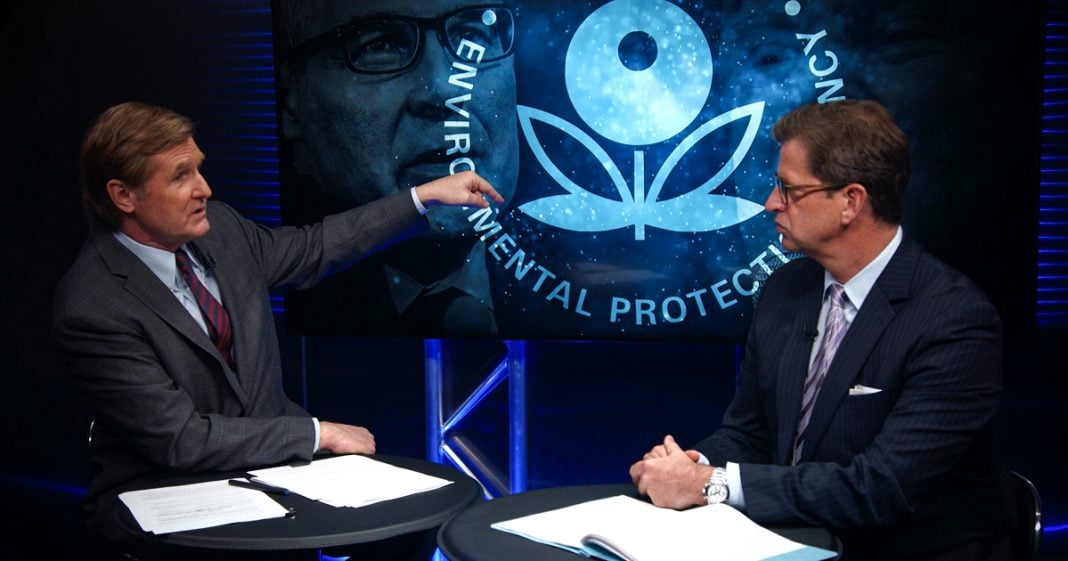 EPA has almost completely stopped doing their job this last year, which means that our air is getting dirtier, our water is more polluted, and our overall health is deteriorating. The agency’s cut way back in holding corporate polluters accountable, and that’s bad news for everybody in this country except corporate America. It’s pumped so much money into this to make sure that this happens. Ring of Fire’s Mike Papantonio and Peter Mougey discuss this.

To learn more about this topic, click here: Protecting the Environment and the Public

Mike Papantonio: EPA has almost completely stopped doing their job this last year, which means that our air is getting dirtier, our water is more polluted, and our overall health is deteriorating. The agency’s cut way back in holding corporate polluters accountable, and that’s bad news for everybody in this country except corporate America. It’s pumped so much money into this to make sure that this happens.

Peter, every time I pick up, every week, there’s another story about people being exposed to radiation because of pollution, or toxins in their drinking water because of corporate conduct. The air the children are breathing in some of these cities are so bad that they’ve actually done the studies, and they say, “Well, it’s coming from these three corporations.” So, we know where it’s coming from. It’s called externalizing cost. Right?

Peter Mougey: Pass the tax on to the taxpayer.

Mike Papantonio: A corporation doesn’t want to spend the money to do the air cleaning on top of the stack. They don’t want to spend the money cleaning the toxins before they go in the river. I saw a story just this week, where an entire community is now exposed to radiation because the companies that were involved wouldn’t do their job. What is your take on the cutbacks that we’re starting to see?

Peter Mougey: Well, the whole story starts with Scott Pruitt, who’s now the head of the EPA. He’s the former AG from Oklahoma that was responsible for single-handedly trying to shut down the organization that he’s now running. I mean, can you imagine? “Hey, let’s get this guy that doesn’t even think-

Mike Papantonio: Well, talk about that more. He really wanted to shut it down.

Peter Mougey: He filed state actions as a state governmental representative, he filed state actions in Oklahoma trying to minimize and shrink the EPA and said, “This is our fight. We want to get rid of the EPA.” He tried to take over the battle. And then you take that guy and have him run the EPA, which is designed to protect us from, as you mentioned, the radiation, the accidental discharges, passing all this pollution, sending it down the rivers. And so, we’re now surprised, which we shouldn’t be, that the number of enforcement actions has decreased, the number of criminal fines, if you take out the Volkswagen fine, everything’s on the way down. Well, why is that surprising?

Mike Papantonio: Yeah, we’re going to be like Beijing here. The last time I was in Beijing, honestly, people were having to wear masks. They have oxygen bars there, to where you can go in and actually be able to breathe fresh oxygen.

Peter Mougey: I love this. Hold on, bear with me. 2.98 billion dollars in fines in 2017. 2.98 billion in fines from the EPA. And now, 2.8 of those came from Volkswagen. So if you take out the Volkswagen fines, they’ve almost done nothing-

Mike Papantonio: And that’s just since Pruitt’s taken over. And so, what ends up-

Peter Mougey: This trend is going to continue. It’s going to get worse and worse. And what you’re going to see is more cleanup problems because nobody’s watching. There’s no watch dog.

Mike Papantonio: Well, and here’s the point. What people miss … They said, “Well, this doesn’t really bother me because I didn’t live in that neighborhood.” It passes on to taxpayers.

Peter Mougey: Sure it does.

Mike Papantonio: What ends up happening is a company says, “You know, I really don’t want to pay for all this. I can increase my bonus if I can keep costs down. I can make more money for the corporation if I don’t do what I know I’m supposed to do, because taxpayers, when everything hits, taxpayers are gonna have to pay for it.”

Mike Papantonio: There’s a great movie … I’m not just saying it’s great because I’m in it. But it is a very good movie. It’s called, The Devil We Know, and it’s about the case I tried up in Columbus, Ohio, where DuPont was dumping just thousands and thousands of, millions of gallons of toxins into the Ohio River. And it caused cancer clusters all up through there. It’s a great movie. It’ll be released, I think, the Toronto Film Festival is the release date, and I think that’s next month. It’s called, The Devil We Know. Go take a look at the trailer. It’s very well done.