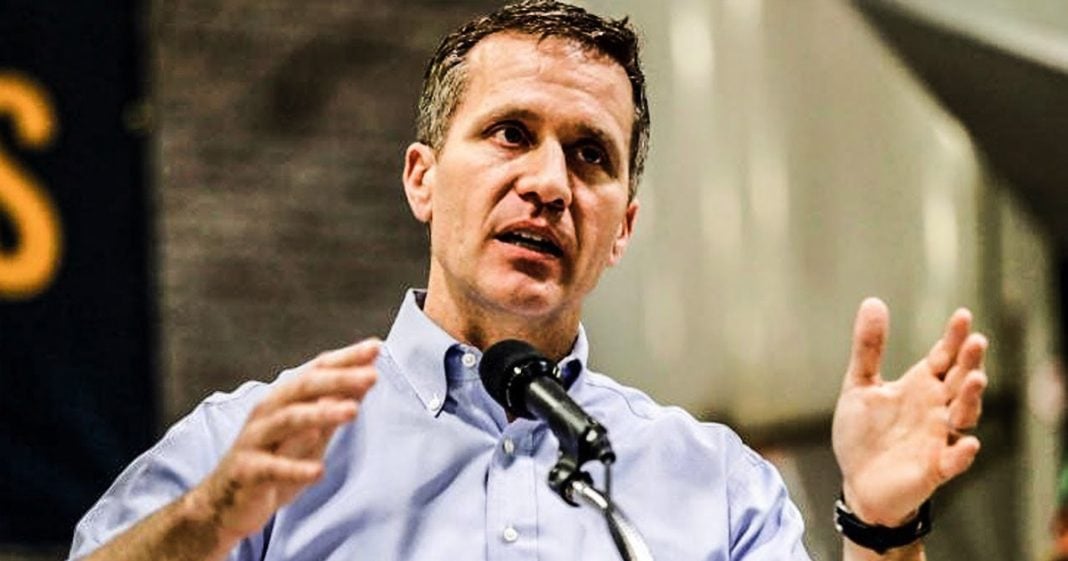 Eric Greitens, the Republican governor of Missouri, was arrested this week and charged with blackmailing his mistress if she came forward with information about their affair. Greitens allegedly said that if the woman went public, he would release naked photos of her. Another family values Republican proven to be a complete hypocrite and a disgusting human being. Ring of Fire’s Farron Cousins discusses this.

A Republican governor was arrested on Thursday of this week after a grand jury found him basically guilty of attempting to blackmail a woman. Here’s the story. Missouri’s Republican governor, Eric Greitens, had a mistress, and they were having an affair. Greitens didn’t want his wife to know about this affair. In order to keep the mistress quiet, according to this indictment, he had nude photos of the mistress, and he said, “If you come forward, if you go to the public, letting them know that I’ve been having an affair with you, in an attempt to ruin my political career, I will release these naked photos of you,” which, as the grand jury found, is criminal blackmailing. So here we have this family values Republican governor, like so many we’ve seen in the past, with this horrible, dark, ugly side where he’s proven to be a complete hypocrite about everything he has said publicly, trying to shame this woman, and blackmail her into remaining quiet, by threatening to release nude photos of her.

For what it’s worth, Greitens was escorted out of this grand jury in handcuffs, something that we don’t see too often in American politics, even when these people are found to be guilty, or they don’t actually get arrested. They just show up at the police precinct, they get their mug shot taken, and they go home. That’s not going to happen in this case. This man is going to be fully prosecuted to the fullest extent of the law, and will hopefully spend many years in prison for his disgusting behavior. Again, it goes back to the fact that this guy, other than occasionally saying that we shouldn’t allow businesses to discriminate against the LGBTQ community, was a big family values guy. Big on traditional marriage. Big on protecting the right to life, and the sanctity of the American family. Here he was, taking nude photos of his mistress, hoping that his wife wouldn’t find out about it.