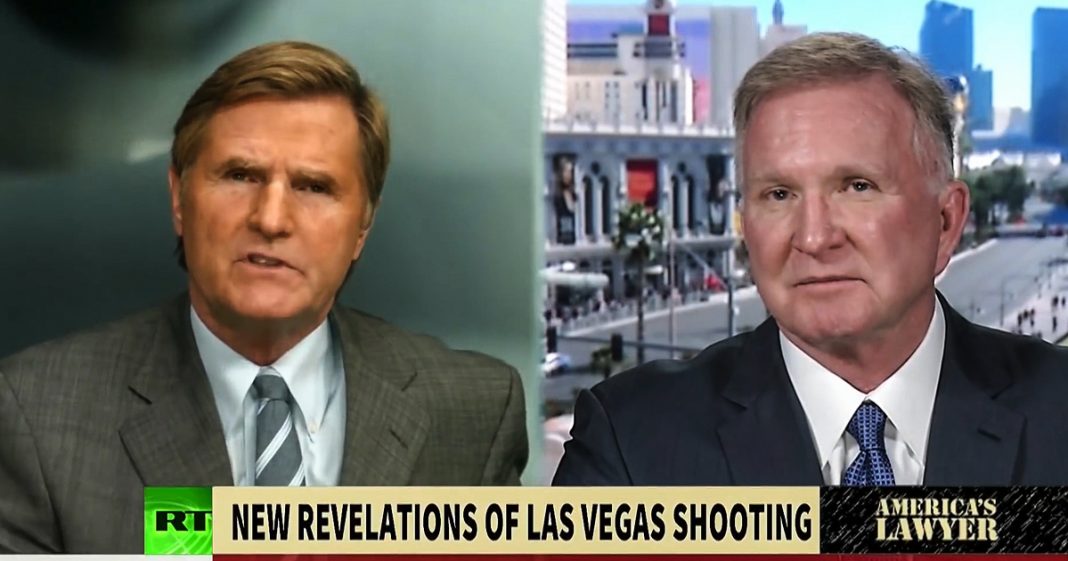 Mike Papantonio: It’s been four months since the deadly Las Vegas shooting, and yet the survivors and families of those who did not survive are still facing major legal challenges. In the last weeks, many new revelations have come about after a federal judge released hundreds of court documents to the public. On top of that, a different judge just ordered the Las Vegas Police Department to release all digital records that were contained about that shooting October 1st. Joining me to talk about that is attorney Robert Eglet. Robert, what new things have been discovered that’s going to help this lawsuit forward?

Robert Eglet: Well, there’s been radio silence from the Las Vegas Metropolitan Police Department for months. For days following the shooting and for weeks following the shooting, there were routine briefings to the press about what was going on in the investigation. And then because there was some misinformation that had come out initially, some time tables were off, timing of different incidents were off, mistakes were made. The police department here basically just shut down all information to the public. The press has been working tirelessly here through court proceedings to try to get more information released. They’ve now had a lot of success recently, so now we’re finally getting a lot of the information that you think would have been released much earlier to the public. They have taken the position that there was an-

Mike Papantonio: What was that silence about? It doesn’t make any sense that you’d have silence about a tragedy like this. The more information that’s out there, the better people are able to perceive. What in the world is the justification for silence to begin with? Before this judge ordered them, “No, do what you’re supposed to do and put this information out there.” What was the rationale?

Mike Papantonio: MGM Properties was said to have botched their response to the security guard that was shot by Paddock. Now it’s reported that MGM personnel had many interactions with the shooter in the days leading up to this attack. MGM says they were normal interactions, but lawyers say it’s hard to believe that these were normal interactions. What’s your take on that, Robert?

Robert Eglet: Well, I mean, it’s hard to say these are normal interactions. Steve Paddock had checked into these two rooms, this suite, days and days before this incident happened. There was security camera of him bringing in dozens of very, very large suitcases or trunk, using the service elevators on most of the occasions, and by himself without other hotel personnel there and sometimes other hotel personnel assisting him bringing these bags up. He was literally bringing these bags up then leaving the hotel, driving back to his house an hour north of Las Vegas in Mesquite, and picking up more guns, more ammunition that was packed in these suitcases, and bringing them back to the hotel. To the point where he brought something north of a dozen of these large suitcases up. This behavior in itself was strange. He wasn’t a conventioneer who was bringing stuff for a convention there. He was a guest. He was a high roller. Why is he bringing all of these heavy items and why are being allowed to be brought up?

Mike Papantonio: Robert, I think the operative word is high roller. They spread out a lot of tips in places like that. They hand out chips, they hand out money, and you know that’s kind of an ingratiating process that as I look at the facts in this case, it looks like that took place right here. You filed a case last week against Steve Wynn. Are you able to talk about that?

Robert Eglet: Well, that’s in the early stages. In fact, just I came from a hearing, that’s why I was delayed today. But it’s a derivative lawsuit against Steve Wynn and the Board of Directors of Wynn resorts for their failure to provide proper oversight of Wynn as the CEO and allow this continuing systemic activity of sexual assaults and inappropriate sexual behavior go on by the chief executive for Wynn properties for decades.

Mike Papantonio: Right. You’re kind of known as the lawyer to see out in Las Vegas. And the reason I asked you about the Wynn case is together with … You’re kind of the person leading the charge against MGM, now you’ve got Wynn when involved. Do you feel like you’re a little bit of a target out there in Vegas because you definitely are pushing back on this MGM case. You’re developing facts that nobody else has developed. What is your take? I know you’re used to conflict, you’re used to controversy, but I think you’re … This is a big effort both in the Wynn case and in this MGM shooting case. You see repercussions from that type of thing sometimes, don’t you?

Robert Eglet: Well, I mean, I’m used to that. When we had the largest medically caused a hepatitis C outbreak in US history here in Las Vegas, I was the lead counsel who pursued that litigation and to ultimate resolution after three or four trials in more than a billion and a half dollars in verdicts. I’m used to the adversary. I’m used to being pushed back by casinos. I’ve been in the business of suing these casino properties for 30 years for some of the negligence and misconduct that goes on there. It’s nothing new to me. So it’s the same old process that we’ve seen here for 30 years.

Robert Eglet: So this case, the cases themselves will not be consolidated into one lawsuit, they’ll be filed as separate lawsuits. And, yes, we’re taking cases from all over the country for both the families of victims who lost their life on 1 October, as well as people who are severely injured from shooting injuries, as well as being trampled in the mayhem that occurred there afterwards. They’ll be coordinated in an effort. The cases will be coordinated here in our state courts, there’ll be a presiding judge, but each of the cases will be handled individually and that’s how we’re handling these cases. And right now I’m leading the charge. I’m leading the attorneys around the country who are presenting these cases. We’ve already had one organizational meeting in my office. We have another one scheduled for next month and we’re proceeding in due course, and at the right time, at the right place, we’ll be filing these lawsuits collectively.

Mike Papantonio: Robert, I’ve followed your career many years. You’re always there on the biggest of the big cases, you always seem to pull it out. A lot of people are counting on you for this one, so good luck out there. If I’m taking a bet since we’re talking about Las Vegas, I would say MGM has a lot to worry about. Thank you for joining me.