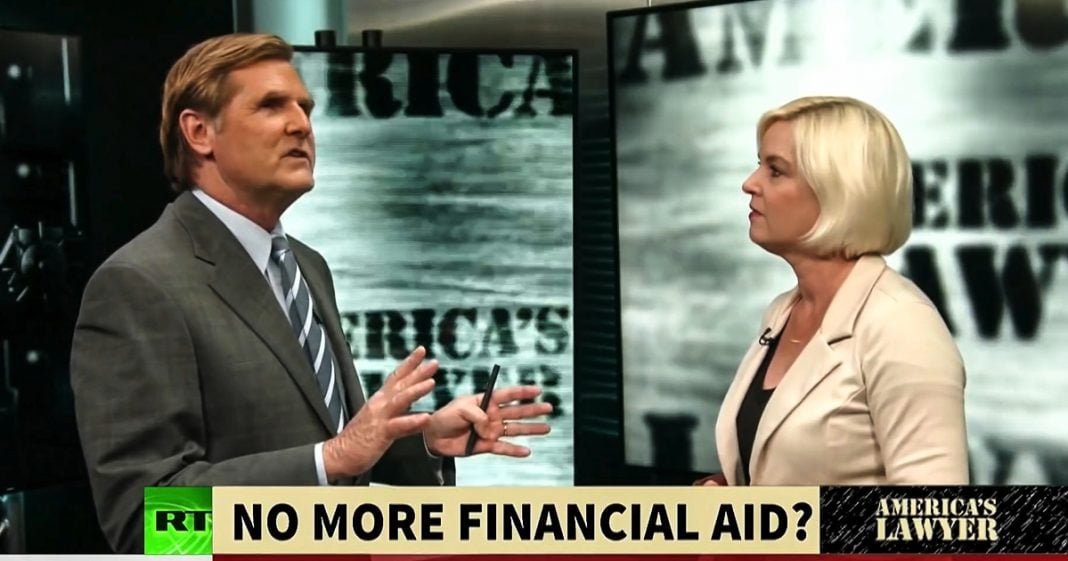 Via America’s Lawyer: Mike Papantonio is joined by Mollye Barrows, Legal Journalist for The Trial Lawyer Magazine, to talk about a new bill that will eliminate financial aid programs to many students.

Mike Papantonio: The US House of Representatives just introduced a bill that’s going to eliminate several federal financial aid programs for university students. The House is expected to vote on the bill within the next couple of months. If it goes through, many students who depend on financial aid for their higher education are going to lose that money. Joining me is Mollye Barrows to talk about this problem. She’s a legal journalist for Trial Lawyer Magazine. The legal angle on this is pretty obvious. Not only do we have a situation where students that have loans, they already are in a situation if they can’t make payments, they find themselves in a tough situation. They have to declare bankruptcy. They can’t even get protection in bankruptcy court. They can’t escape the problem as it is.

Mollye Barrows: You’re exactly right. Here we are with the House in the process of trying to overhaul the Higher Education Act. Among the proposals that they’re making are eliminating the Public Service Loan Forgiveness. So if you graduate, you pay on your loan for 10 years in good faith. You’re making good progress, you get a job with a government agency or a nonprofit, and then you get your loans forgiven. It’s essentially equivalent of forgiving their debt. Well, they want to eliminate that.

They also want to make changes to other programs that would put less restrictions on for-profit colleges and institutions and more accountability measures, go figure, on non for profit. So the ones that utilize a lot of these grants are going to see things like, for instance, if you receive 600 million in annual grants for a minority-serving institution, you got to show that 25% of your kids or going to graduate or transfer. So it’s more pressure on-

Mike Papantonio: Exactly. We just did a tax cut, which took away from the process of available money, over a trillion dollars. Now we’re talking about infrastructure of another $1.2 trillion. We know who loses here and who wins. The banks win in a big way here, don’t they, Mollye?

Mollye Barrows: Absolutely, and the for-profit colleges are going to win as well because they’re going to have … It’s going to make it even easier for other institutions that also want to offer for-profit degrees, if you will. But there’d been some accountability before. You couldn’t necessarily apply for some of these student loan programs if you were a for-profit college without jumping through certain hoops. Now they want to tighten those loopholes … or actually, I should say loosen those loopholes so that they don’t have those restrictions anymore.

Mike Papantonio: Well, if this is a-

Mollye Barrows: … and the banks.

Mike Papantonio: The legal take on it though … This is a legal program and the legal take is you used to be able to find some protection for a student who’s-

Mollye Barrows: And there is none.

Mike Papantonio: … buried in bills, doesn’t have a job, is being hunted down by the lending agency, you have some things you could do. You had the threat of bankruptcy, that’s gone.

Mike Papantonio: You had the ability to say “Look, if you don’t negotiate with us, mediate it, whatever, we’re going to declare bankruptcy and you’re going to lose all of it.” That’s gone, isn’t it?

Mollye Barrows: Yes. Oh, it’s … absolutely. It was already difficult enough for students to declare bankruptcy because they were basically … You couldn’t discharge a student loan unless you could prove extenuating circumstances and met certain requirements like extenuating circumstances and at least showing a good faith effort to pay. It was already difficult to do that. Most of the time, student loans were not forgiven in bankruptcy.

Mike Papantonio: The private colleges and institutions love it.

Mike Papantonio: The universities are fighting for their lives, is that right?

Mollye Barrows: Absolutely, and most of the advocacy groups that support those folks that want more access to higher education and affordable higher education as well as rules in place that ensure that when a kid does go to school to get a degree, that it’s going to be in a job that they can get gainful employment. They’re also trying to make adjustments to that rule as well, the gainful employment rule.

Mike Papantonio: The other thing about this, this isn’t Republican or Democrat. This is being pushed by both sides-

Mollye Barrows: It’s actually predominantly being pushed by Republicans in the House.

Mollye Barrows: … this unfortunately, and the White House is supporting this as well. The saving grace is that in the Senate … Well, I say the saving grace for those who don’t want to see these changes made to the extent that they’re being proposed through the House-

Mike Papantonio: Is the Senate.

Mollye Barrows: … is the Senate because they haven’t started work on their overhaul yet.

Mike Papantonio: Let’s hope. Mollye, thanks for joining me. Okay?