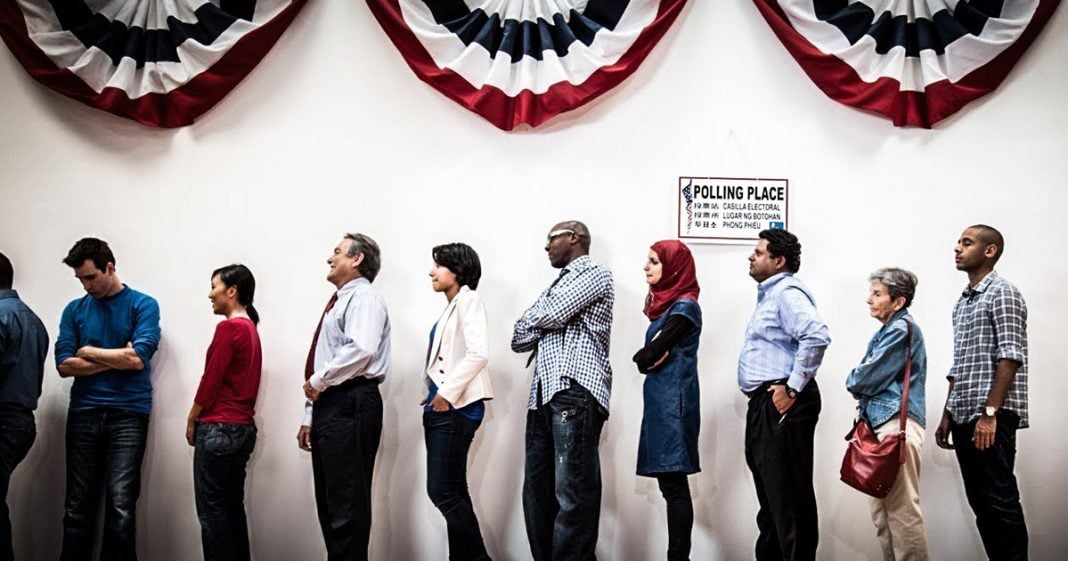 According to a new poll conducted by Gallup, the Republican Party is losing quite a bit of voters as they no longer wish to identify with the Party. But that doesn’t mean they are flocking to the Democratic side. Instead, these people are becoming what is called “pure independents” with no party allegiance, a sign that Third Parties might finally be able to make some progress in elections. Ring of Fire’s Farron Cousins discusses this.

According to a recent report by Gallup, Republicans are losing numbers across the country. The number of people in the United States who want to identify or are willing to identify as Republicans has fallen by several percentage points, about three or four.

Now, that may not seem like a lot. Three to four percent nationwide, sure whatever, we’ll take it. However, historically, party ID affiliation does drop following a presidential election, but it only drops by about one or two percent. So, this three to four percent is about double what we’re used to seeing and according to the researchers that worked on this survey, they believe that it is more permanent than the Republican Party realizes.

Now, Democrats are probably getting pretty excited at this point. These people are no longer Republicans, so they’re coming over to our side! Well, guess what? They’re actually not. The number of people who identify as Democrats has remained steady for the last year and a half, so these people defecting from the Republican Party are not going to the Democrats. Instead, the survey says, they’re becoming what’s considered pure independents, meaning they have no allegiance, no alliance with one party or the other.

They are truly independent voters who will vote on the issues. And that is even more important and better than them just straight up joining the Democratic Party. Now, let’s get one thing straight. I am a Democrat. I am a registered Democrat. Have been since I turned 18 years old. And I am not ready to defect out of that party yet. It has a ton of problems. I understand that.

I don’t agree with the way they handled the primaries. I think yes, there was some foul play there. But, I’m not gonna give up on them. I’m not just gonna say screw it, I quit. I’m not like that. I’m going to keep trying to make it better. But I also understand the value and necessity of third parties.

So, this study from Gallup saying that more people are becoming pure independents, meaning they’re unlikely to go to one party or the other is a great sign. It opens up an opportunity for third party candidates at the House level, the Senate level, the state level, maybe even the presidential level, and have a real shot at winning, a real shot at re-shaping the make-up of Congress. Of the presidency. Hell, of the Supreme Court!

People who do not adhere to everything Republicans say or everything that the Democrats say, people who just maybe have a mind of their own. That’s what we need more of in this country. If we can’t rebuild the Democratic Party, if it turns out that that is a completely a lost cause, then third parties are where everybody’s gonna go. The Republican Party is lost. Diehard, lifelong Republicans look at their party now and they don’t recognize it. We have seen too many defectors in the last year to think that that party’s gonna be able to rebuild completely to what they were after Trump leaves office.

But the Democrats have too many problems of their own, and if we can’t solve them from the inside, then yes, they’re gonna see massive defection as well. They’ve already seen a little bit of it, but nowhere near to the lengths that you would think from reading comments on Facebook and Twitter. It just hadn’t happened. There’s still plenty of people like myself who want to stay in the party and fix it and make it what it needs to be to more better represent a modern America. But the old guard doesn’t want to let us in.

And if we can’t change that, we will defect. But right now, the number of independents in the United States is increasing, and that is exactly what we need going forward to truly get a government that understands and represents a better portion of the American public.