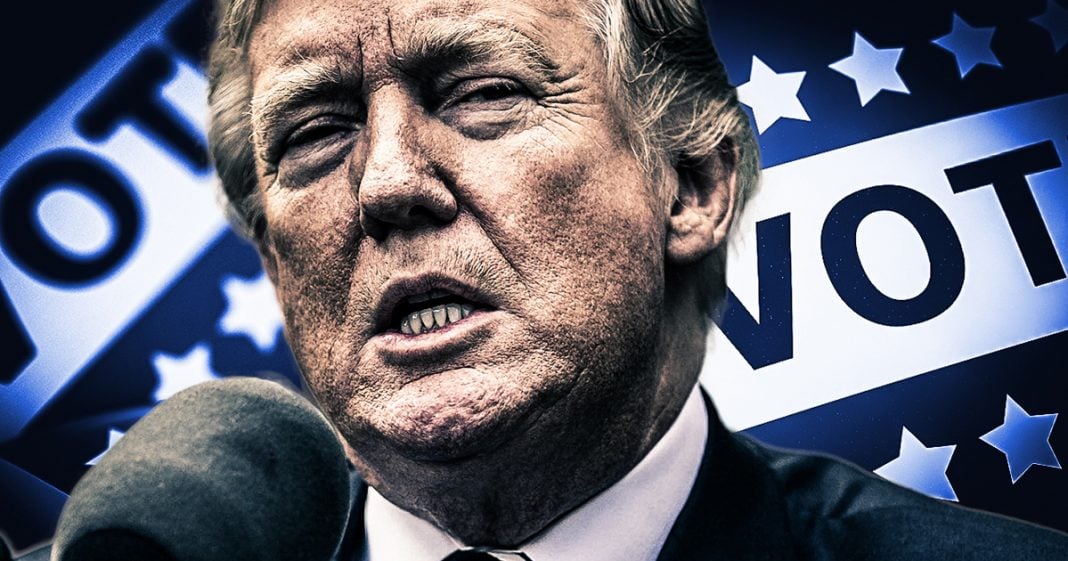 Only 19 total states in the US have a favorable view of Donald Trump, which is roughly half of what that number was a year ago. Trump can’t afford to lose any more support, and the Republican Party should be freaking out over the latest polling data showing how unpopular their leader is. Ring of Fire’s Farron Cousins discusses this.

According to new polling released this week from Morning Consult, Donald Trump only has a net positive approval rating in 19 of the 50 states that make up this country. A year ago, around the time of inauguration, that number was almost 38; 38 states gave him a net positive approval rating. Today, 19 states say that, yeah, Donald Trump overall decent enough guy. That is actually a much bigger deal than most people would think, because we’re talking about approval ratings falling in hard-right states like West Virginia, like Kentucky, places where Republicans typically don’t have to put in any effort to win that state in a presidential election.

Well, guess what? Now, they’re going to have to. Donald Trump has become a cancer for the Republican Party. The remaining Republicans in D.C. don’t quite seem to understand that yet, but they will. As the investigations continue, as more allegations about what happened with his staff and what happened with that porn star continue to come out, Donald Trump is going to continue losing support. I know recently, prior to this week, some polls following the State of the Union Address showed Donald Trump’s overall approval rating slightly ticking upward. Well, guess what? That’s already stopped. Nobody’s fooled anymore. That little bump from the State of the Union was exactly that. It was a bump, and after you get up the bump, you go back down, and that’s what’s happening.

We are now a little under nine months away from the 2018 mid-term elections, and Donald Trump can’t even pull in half of the states in this country with a net positive approval rating. Republicans behind closed doors, certainly not publicly and not in front of Trump, are freaking out because they understand that his unpopularity is going to hurt them all at the polls. That’s why we’ve seen a record number of Republicans decide suddenly to retire this year, “We’re not going to run for reelection in 2018. I think we’re done. I think we accomplished what we needed to. I don’t want to go face those people. Please don’t make me go out to answer questions about why I supported everything this guy did. Let the next guy do it, the guy who wasn’t there in D.C. for any of this. Just let him be the one to have to answer those questions. I’m going on vacation. I’m going to become a lobbyist. Don’t worry about me.”

That’s what’s happening with the Republican Party. They understand Trump has destroyed it. They just refuse to do anything about it because they have so little courage and so little conviction. Rather than attempting to fix their party, they’re just going to abandon it and say, “Hey, thanks for all the cash. Have fun crashing and burning with Donald Trump.”

That is exactly what’s going to happen, and that is what these new poll numbers are showing us. Republicans understand it. Democrats sure as hell understand it. In fact, the only person who doesn’t understand it or who won’t believe it is Donald Trump himself.