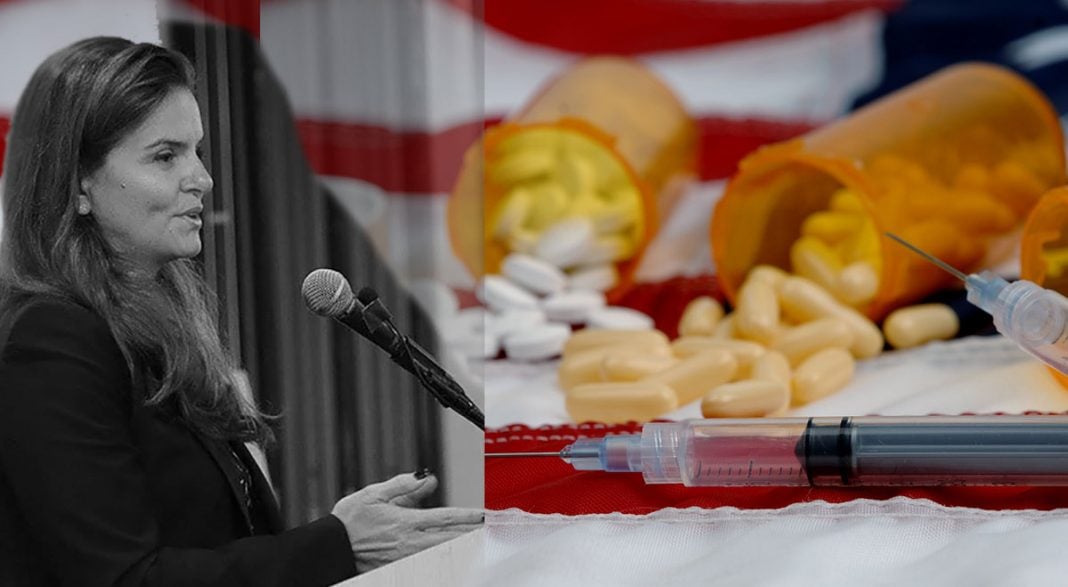 Her name is not exactly a household word outside of the Beltway, but she runs a Washington D.C. advocacy group known as the Addiction Policy Forum (APF). This past December, Jessica Hulsey Nickel, the group’s president and CEO, was interviewed by NPR’s Noel King. In that interview, she revealed that her own parents had died due to drug addiction.

This is what set her on her life mission: to provide assistance to families and patients, expand treatment options, identify resources, protect the children of parents with substance abuse issues, reform the criminal justice system and to provide education, all with the ultimate objective of reducing the number of lives destroyed and lost to drug addictions.

So why did the APF accept funding from the pharmaceutical industry?

This issue came up recently in Minnesota, where lawmakers have been considering a tax on the sales of opioid-based medications. Not surprisingly, Big Pharma is dead-set against it. In November, the industry sent its five of its own lobbyists from the Pharmaceutical Research and Manufacturers of America (PhRMA) to meet with Minnesota legislators. Those lobbyists were accompanied by one other person.

That “other person” was Jessica Hulsey Nickel.

The fact that she had come as a guest of PhRMA raised a few eyebrows among those lawmakers, despite her insistence that she was neutral on the issue of an opioid tax, and was at the meeting simply to offer her organization’s assistance in curbing the opioid addiction crisis. State Senator Chris Eaton, a co-sponsor of the opioid tax bill, said that Nickel “…was insisting that she was totally independent and they hadn’t put any strings on her.” Eaton nonetheless had her doubts.

It turns out that Senator Eaton’s doubts are justified. Two weeks after that meeting, the APF acknowledged that it has received funding from PhRMA. Nickel, who says she prefers to “talk about the patients and the families and not focus on the numbers” did not reveal exactly how much her organization has received from PhRMA. However, according to PhRMA head Stephen Ubi, those contributions have run well into the seven-figure range over the past several years.

Nickel continues to insist that APF is not beholden to the interests of the pharmaceutical industry, and claims they are valuable partners in addressing the problem of addiction in the U.S. She says any funding from drug companies will be used to pay for additional resources for addicts and training programs for medical personnel who are treating patients struggling with substance abuse.

Jessica Hulsey Nickel may have the best of intentions, but as Benjamin Franklin reportedly wrote in Poor Richard’s Almanac some 250 years ago, “They that lieth down with dogs shall rise up with fleas.” Lexi Reed Holtum, executive director of an addiction advocacy organization in Minnesota, puts it more plainly: “You cannot hold an organization accountable if they are paying your bills.”

There is also valid speculation that funding organizations such as the APF are yet one more way the pharmaceutical industry is attempting to manipulate public perception and play both ends against the middle at a time when they have earned the hatred and contempt of Americans across the spectrum. Ubi would have us believe that PhRMA’s funding of APF represents a “major commitment” toward solving the opioid addiction crisis.

Dr. Andrew Kolodny, an expert on opioid policy at Brandeis University, begs to differ. “The industry is making investments, trying to influence policymakers that this is not a problem of overprescribing opioids,” he says. “They are investing in nonprofit groups that will do the same.”

Given Big Pharma’s behavior and the profits that are at stake (prescription opioid sales totaled $8.6 billion in 2016), we are inclined to agree with Dr. Kolodny. If Jessica Hulsey Nickel honestly believes that Big Pharma has any intention of helping anyone or anything except its own interests, she is very tragically naive.