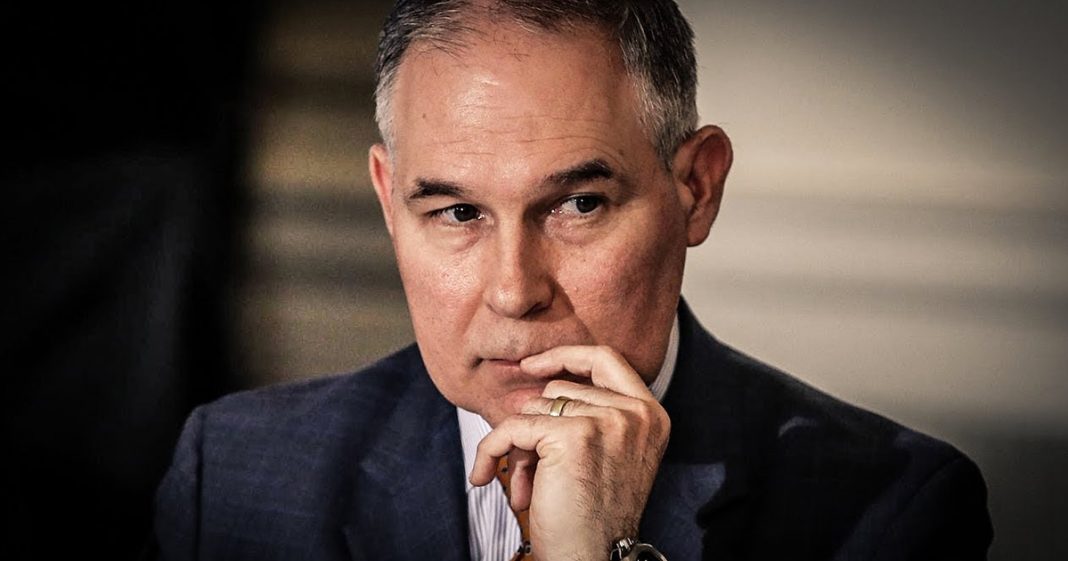 Scott Pruitt, the head of the EPA, has been making headlines for all the wrong reasons since he came into power. And recently his travel habits have become the source of much scrutiny. But according to the EPA itself, the agency doesn’t have enough money to investigate his scandals anymore, which means that Pruitt gets off the hook on a technicality. Ring of Fire’s Farron Cousins discusses this.

EPA Director Scott Pruitt has been making headlines, basically, since the day he came to power and not one of them has ever been positive. Recently, the reason that this guy is making headlines is ’cause he says he flies first class or the super expensive business class on overseas trips because people in coach are just so darn mean to him. He doesn’t like being around them because they’re mad that he’s polluting the hell out them because he only works for corporations and has no concern about environmental protection, even though that’s, literally, his job.

The EPA’s office of investigators has opened up investigations into the travel habits of Scott Pruitt to find out exactly if these flights are on the level because as it looks like right now, no. He was misusing government funds to travel first class because he didn’t want to be confronted by the people that he’s letting corporations poison. There have been investigations into this for several months, but this week the EPA came out and let everyone know that, hey, this guy’s actually done so many things wrong, and the Trump government has under-funded our office so badly that we don’t have enough money left to continue investigating all of the potential abuses of power committed by Scott Pruitt.

Let me tell you, this is by design. This is one of the reasons why Republicans like to under-fund government agencies so that when they do things that need to be investigated, there’s no money left to investigate them. When it comes to enforcing rules on corporations who are poisoning people, there’s no money to enforce the rules. You destroy the government from within because Republicans hate the federal government. They’ve told us that. They want to shrink it. They want to cut these agencies. They want to destroy them. What better way to do that then to put somebody as corrupt as Scott Pruitt at the head of the EPA, let him do all these things wrong and then say that you don’t even have enough money to investigate him?