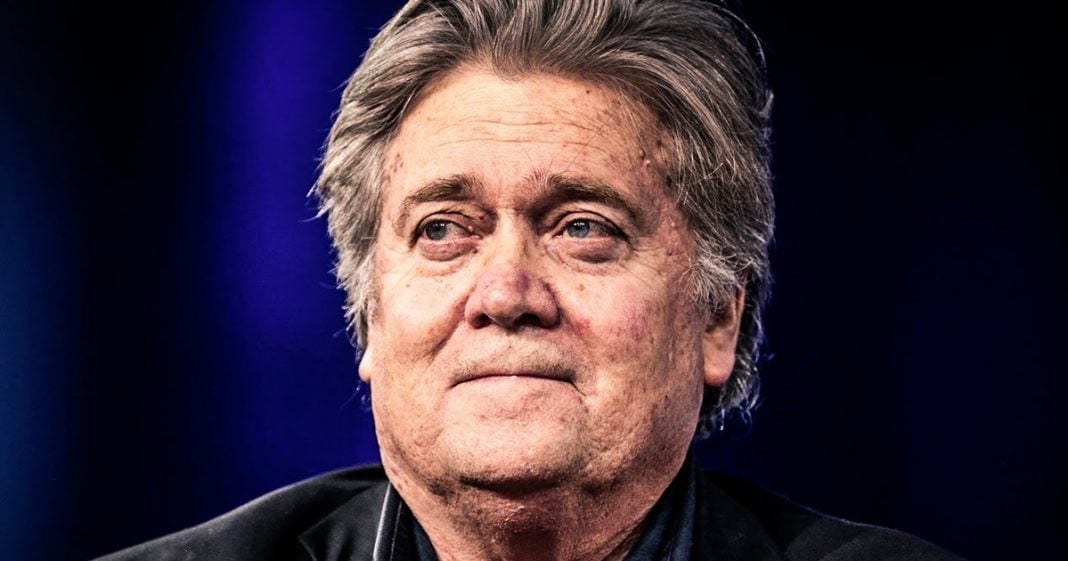 According to a new book by author Joshua Green, former White House adviser and Breitbart editor Steve Bannon believes that the #MeToo movement poses a huge threat to Donald Trump and that women are going to “rise up” and “take charge of society.” Wouldn’t that be a good thing, though? Ring of Fire’s Farron Cousins explains why Bannon is so afraid, and why people like him SHOULD be afraid of what the future holds.

According to a new book called Devil’s Bargain by author Joshua Green, Steve Bannon is absolutely terrified of women. Now, I don’t mean terrified of seeing them on the street and he runs and hides. I mean Steve Bannon, according to Joshua Green, is terrified of women taking over this country. You see, Green says that Bannon was terrified when Oprah hinted maybe that she was going to run for president. He believed that Oprah would absolutely trounce Donald Trump in the election and that she represented a huge threat to the president, but the bigger threat, Bannon believes, is the #MeToo movement.

All of these women suddenly being empowered to come forward and tell their horrible stories about these horrible men in this country, Bannon believes that this has the power to take down Donald Trump and get more women elected into politics, which would then result in women rising up and taking charge of this country, to which I say, good. That’s actually what we need as a country, and I’m not just talking about taking down Donald Trump. I’m talking about women being put in positions of power. We have a country right now that’s pretty evenly split in population, men and women, right? Women represent about 10% of all elected officials throughout this country at the local, federal, state levels, 10, and Steve Bannon thinks that that might even be too many. Let’s cut that number back to five, or three, or one, or less. That’s what Steve Bannon wants.

He doesn’t want to see an even split in D.C., 50/50, men and women. He doesn’t want to see a representative government that is truly representative, but that’s what we need as a country. We can’t have a bunch of old white guys sitting in D.C. in the House and Senate making the rules for men, women, everybody in this country, regardless of skin color, religion, sexual orientation, everything. A bunch of white Christian guys calling all the shots for everybody, telling us what we can and can’t do with bodies, what we can and can’t do with our free time, and that has to change.

Women, like so many other groups in this country, except for white guys, have been oppressed for too long. It’s systemic oppression. We see it in corporations. We see it in the pay gap. We see it in elected officials. It’s time to end that, and if that makes Steve Bannon a little uncomfortable or a little scared, it’s because he should be. People like Donald Trump should be scared. Anyone who’s spent their lives trying to keep women down or anyone, whether they’re African American, Hispanic, Muslim, homosexual, it doesn’t matter. If you have spent your life trying to keep others down to raise yourself up, then you should be worried, because change is on the horizon, and those of us who haven’t spent our lives oppressing people, we welcome it. It’s only the people that believe they’re better than everyone else that are scared, and they should be.