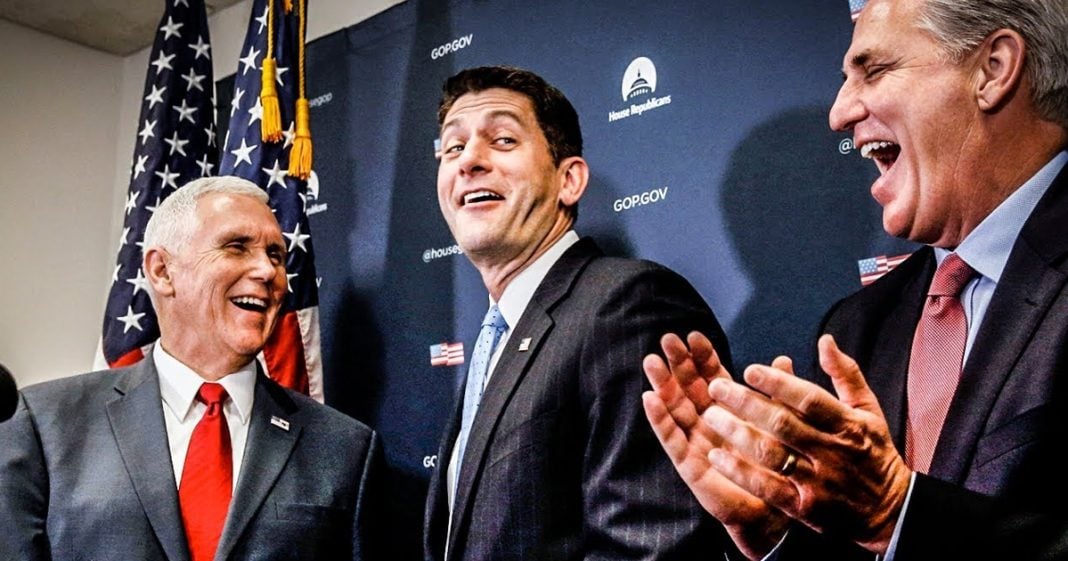 There’s a reason why members of Congress always seem to be so out of touch with their constituents. According to recent financial filings by members of Congress, the average Senator and Representative have more than 12 times the wealth of average American citizens. With such a massive disconnect, is it even possible for them to understand the struggles of their constituents? Ring of Fire’s Farron Cousins doesn’t think so and he explains why.

If you’re wondering why it seems like politicians in Washington, D.C., have such a disconnect between voters and their constituents and average American citizens, it’s because there is a massive disconnect between people in Washington, D.C., and people in the rest of the country. It’s not because they’re removed from it, not because they’re in D.C. and not in their home states. It’s because they live in a world where most of them are extremely, exceedingly wealthy and have been for most of their lives.

According to a new report, which is based off of the financial filings of members of the House and Senate, the average member of Congress is more than 12 times wealthier than the average American citizen. See, average median income in the United States is right around $50,000, median household income, which means that the average family that you see on the street, they’re pulling in about 50 grand a year for their household. Meanwhile, for the Senate, the average net worth, not including any property, just cash value of a Senator is 3.2 million. The average cash value of a member of the House of Representatives is $900,000. Meanwhile, the average American citizen in cash value is walking around with 20 maybe 30, depending on how much they have in savings or how much they have in their retirement accounts.

Yes, there is a massive disconnect and, yes, it plays a huge role in how these people govern. They don’t know what it’s like to struggle. They have never gone into the grocery store, tried to buy $12 worth of groceries and had their debit card declined. Now, maybe some of them have, but, as a whole, the majority of them, the vast majority of them, they don’t know what that’s like. I do. It’s happened to me. It’s happened to a lot of people in this country. It happens every single day.

How can we expect these people, who live in these wealthy little bubbles, to understand our struggles and to represent us accordingly? The answer is: We can’t. We have to not only get outside money out of politics. We have to get inside money out of politics, because when you are wealthy, and this current Congress is a prime example, the only thing you care about is that wealth. That’s why everything that they have done for the last year has been to protect the wealthy and screw over the poor.

Donald Trump’s budget that came out this week does exactly that. It preserves the tax breaks for the wealthy; it cuts programs for the needy; and it’s because everybody sitting there in Washington, D.C., or almost all of them, are worth 12 times more than you and me, so they don’t care about us. They know that we’re not going to fund their campaigns but, more importantly, they don’t care. They wouldn’t care if we did, because some of us will donate money to these idiots. They only care about what they know: preserving their own wealth, preserving their own career.

Let’s make them have to care. Let’s talk about these issues more. Let’s keep this talking point alive as we head into the 2018 midterm elections. We need average people running for Congress. I don’t care if they have political experience or not. It would be great, but what’s more important is that they understand the struggle, because if you put somebody in office that was born with a silver spoon in their mouth, has always been worth a couple hundred thousand dollars, has never had to worry about where their next meal is coming from, then they’re not going to worry where your next meal is going to come from. If we want change in this country, that’s the first thing that we have to change.