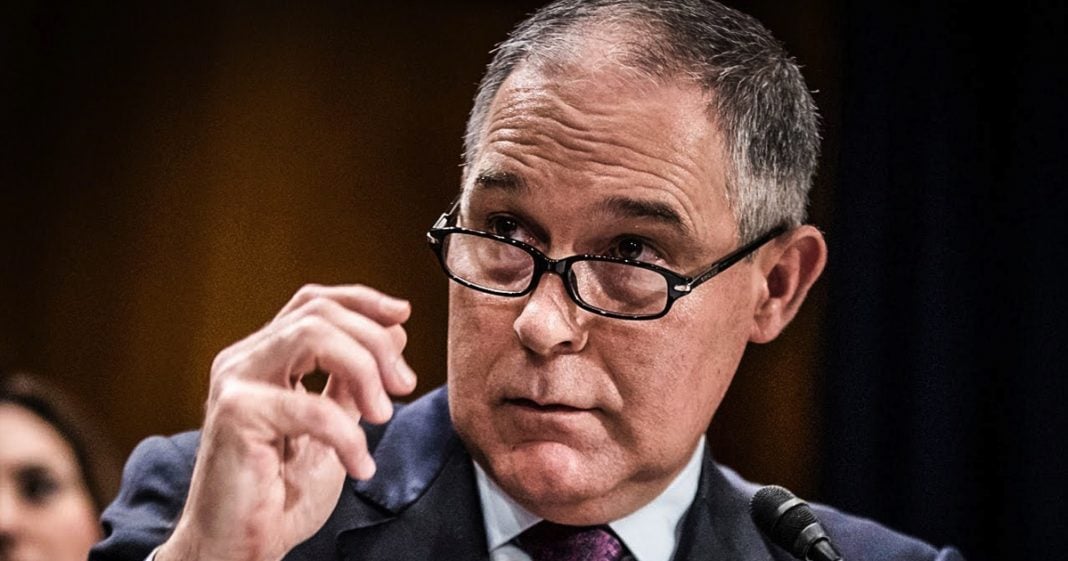 Scott Pruitt, the head of the EPA, recently took a lot of well-deserved criticism for his lavish travel habits, so he fired back at his critics by saying that he has to fly in first class because of “safety concerns.” Do those “safety concerns” revolve around not having to see poor people? Or is he afraid of having to confront the faces that his agency is no longer protecting? Ring of Fire’s Farron Cousins discusses this.

Scott Pruitt, the head of the EPA was under fire this week when his travel plans kind of became public. It wasn’t about where he was going, it was how he was getting there. You see, Scott Pruitt the head of the Environmental Protection Agency, a guy that basically made his living helping to sue the EPA on behalf of corporations because they funded his campaigns, he likes to fly first class. When first class isn’t available like when he’s going overseas, he likes to fly in the very, very expensive business class. When asked about this by reporters for his exorbitant travel expenses, Scott Pruitt decided to tell us that the reason he likes to fly first class is because it’s a security issue.

Specifically he doesn’t like being confronted by people who might be flying in the cheap seats. So he wants to be in his little cocoon of first class or business class where those poor people that he’s allowing the EPA to continue to poison, don’t have to question him about what he’s doing and more importantly, what he’s not doing as the head of the EPA. He doesn’t want to have to look those people in the face and say, “Look, I know I’m trying to repeal the clean air act which is going to hurt you guys a lot more than it hurts me but you know, let’s just enjoy the flight, maybe gets some peanuts or pretzels, whatever you want. It’s on me.

That’s basically what’s happening here. Scott Pruitt doesn’t want to see the faces of the people who are going to be hurt by the fact that he doesn’t want the EPA to enforce its rules. He doesn’t want to be confronted by people who might have questions about why this administration doesn’t want to protect the environment. He wants to stay in his cushion, he wants to stay in his little sound-proof booth back when he’s in Washington, D.C. and ignore the cries of millions of people asking, “Why? Why are you poisoning me? Why are you poisoning my children?” And Scott Pruitt doesn’t have a good answer for that other than, because it makes corporations a lot of money.