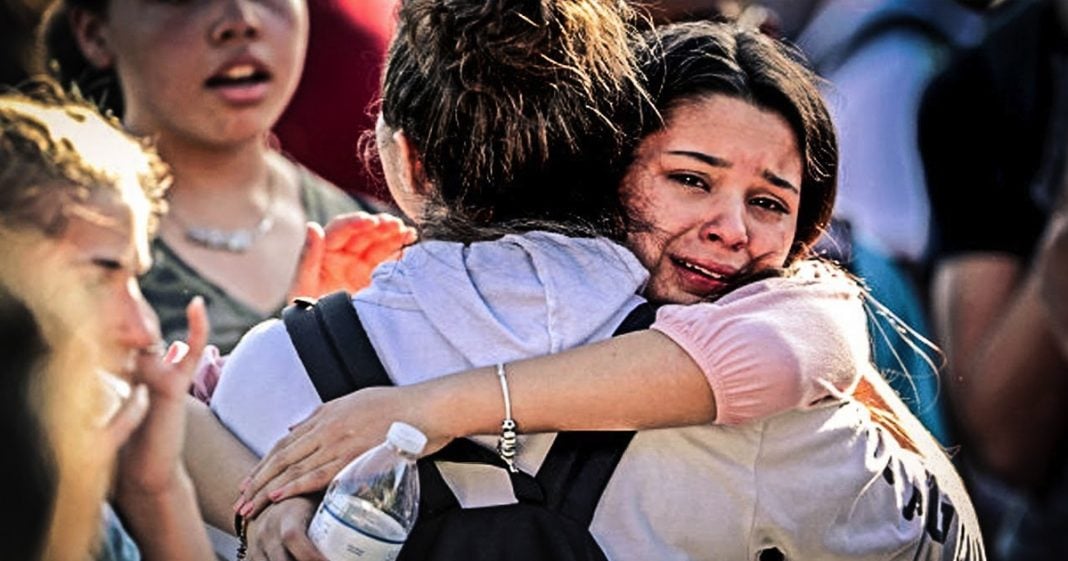 Following another mass shooting at a South Florida high school, Republicans took to Twitter to offer their standard “thoughts and prayers” for the victims and their families. This response happens like clockwork every time there is an incident, which there have been 18 school shootings so far this year. Republicans won’t solve the problem because they take in too much money from the NRA. Ring of Fire’s Farron Cousins explains what must be done to prevent further bloodshed.

Yesterday a student walked into a high school in South Florida and killed 17 people with an AR-15 rifle. The AR-15 has become the weapon of choice for mass shooters in the United States. As a result, Republicans immediately obviously offer thoughts and prayers for the victims. Ted Cruz was on Fox News this morning telling us the Democrats are so quick to politicize these tragedies and demand that we hand over our Second Amendment rights. Well, you know what? At this point, yeah, something’s got to happen because your thoughts and prayers aren’t doing shit to address the problem of people, children, American citizens getting mowed down in places where they should be safe.

It is because people can get their hands on these weapons too easily. There is a mental health component to it as well. Donald Trump was quick to point that out on Twitter and everybody else was quick to point out the fact that last February that idiot decided to do away with the Obama era rule that made it more difficult for mentally ill people to get their hands on guns. They have done everything possible to allow even the mentally ill to get these kinds of weapons and that is why we’re having these kinds of problems.

Anybody can get their hands on an assault rifle or a miniature assault rifle or basically any kind of weapon designed to kill as many people as possible in as little time as possible. Now I’m not talking about getting rid of all the guns in this country. I know that’s unrealistic. I wouldn’t have a problem with it if it happened, but I don’t think that we’re ever going to hit that point. Guns are a reality we have to live with. AR-15s, military grade weapons in the hands of civilians? That is something that we can control. That is something that we can do something about because we have in the past.

Yes, when you look at the statistics, the United States has more mass shootings than any other country in the world. Why? Because we have the most lax gun laws. In countries with tighter regulations on weapons, they have fewer gun related deaths. It is a fact. I’m sick and tired of hearing Republicans and their apologists tell us that. “Well, if you outlaw them, people are still going to get their hands on them and they’re going to still kill people. So what’s the point in having laws at all?” That is one of the dumbest thing that only a truly stupid human being would ever argue because the data is there. You put in the gun controls.

You put in these tougher regulations and gun deaths go down. There’s no arguing with that. That is a fact. That is a fact across the planet. Something has to be done though. Something more than thoughts and prayers. Something more than Republican’s saying, “Well, we can’t politicize this,” but you better bet if this guy was a Muslim or if he was black, we’d be politicizing the hell out of it just like we have anytime that an immigrant kills somebody in the United States. Oh, a few people died from immigrants and suddenly we’ve got a build a $50 billion wall along our southern border.

Are we going to build walls around our schools, around our hotels, around our shopping malls, around our churches to protect from mass shooters? No. We won’t address that problem at all. We’ll just hope that it goes away. We’ll hang our heads in silence. We’ll take the $54 million that the NRA pumped into the 2016 elections and we’ll pretend it never happened because that’s what they do every single time. Children are dead. Parents woke up this morning, if they were able to sleep at all, without children anymore. It’s the fault of the Republicans. It’s the fault of the people who took the money from the NRA.

They have that blood on their hands and there is not enough soap on this planet to wash it off.