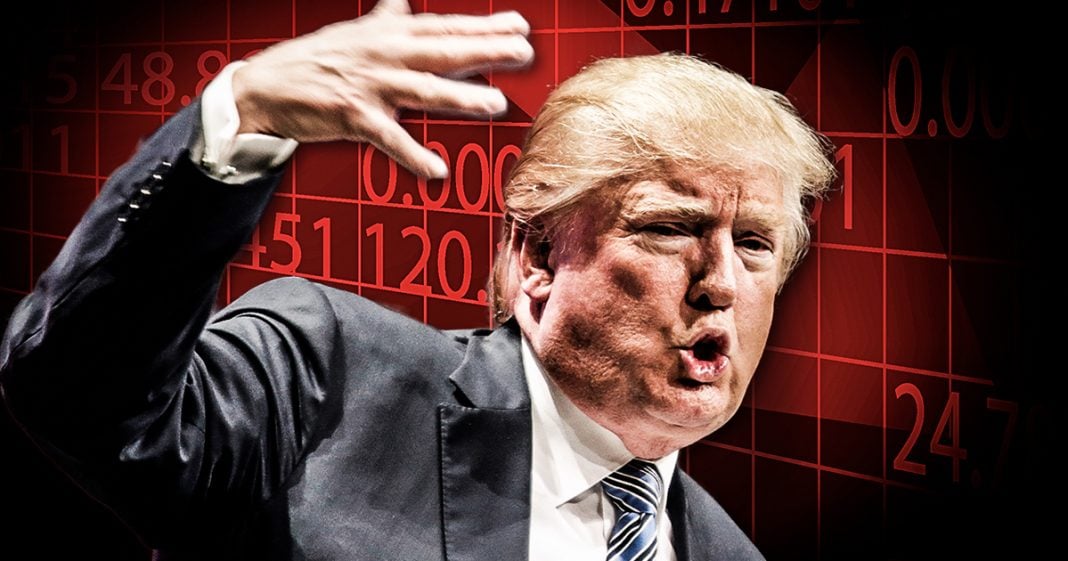 The numbers for January are in, and consumer prices rose at a far greater pace than forecasters had expected. They now worry that we’re about to hit a period of major inflation, driving consumer costs up and demand down. Trump’s economy is burning to the ground, but he just wants us to focus on the less than 2% of Americans who just got a small pay raise. Ring of Fire’s Farron Cousins explains why things aren’t as rosy as Trump and the Republicans would like us to believe.

If you listen to Donald Trump, or really, any of the republicans from Washington DC tell the story, they’re gonna tell you that the economy in the United States is doing phenomenal. People are getting bonuses. They’re getting raises. The stock market, depending on the day, might be doing great and breaking records, or it might be breaking records by falling the most it ever has in one day. But overall, trust us, no. The economy is totally great according to republicans. Well, according to economists and forecasters, and people who actually spend their time observing the economy, things are about to get really, really bad in the United States. The cost of consumer goods, in the month of January, grew at a rate that far exceeded the expectations of economic forecasters in this country.

So what does that mean? We had a zero point five percent increase overall, across the board, of consumer goods in the United States. While that may seem small, keep in mind that that literally happened in 31 days. Point five percent increase in consumer goods. Gasoline, shelter, clothing, medical care, food, everything that average American citizens struggle to already afford. And prices are going up. At this rate, we could see overall increases of six percent by the end of this year. And when you factor in that less than two percent of the population got those “tax cut raises”, we’re looking at a real economic problem in the United States.

Forecasters are already warning us that inflation is right around the corner. Prices are gonna go up, demand therefore, is going to fall. Employment at that point, with demand falling and prices rising, is also going to fall. More people will lose their jobs. The governments already decided to cut most of the benefits for people who lose their jobs or who can’t afford groceries and food. So everybody’s going to suffer. It’s gonna create a severe lack of demand in the United States, which then results in a lack of labor. The economy is on the verge of collapsing, and that is what these economic experts are warning us.

If the current trends maintain, we’re headed for a major crash in the United States. While Donald Trump and his republicans whistle past the graveyard. Telling us how great it is that corporations get massive tax cuts and you get a buck fifty extra a week. I’m sure that’s gonna help pay for the rising cost of gas and shelter, and clothing, and medical care, and the food you have to eat everyday just to survive. Yeah. A buck fifty a week is certainly gonna help as the entire economy comes crashing down because republicans and Donald Trump know nothing about fiscal policy.