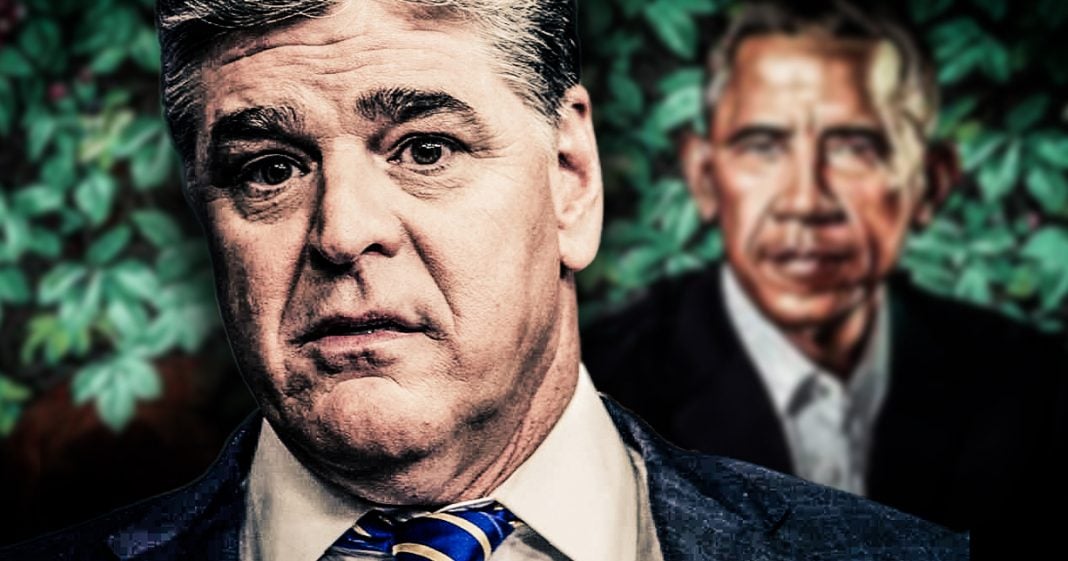 Sean Hannity believes that the official portrait of Barack Obama that was unveiled this week contained sexually suggestive material, including the image of a sperm on Obama’s face. After massive backlash, Hannity removed the article from his personal website, but the whole incident shows how deranged Sean has truly become. Ring of Fire’s Farron Cousins discusses this.

Earlier this week the official portraits of Barack Obama and Michelle Obama were unveiled. They were unconventional, they picked their own artist for this. He did them in a way that was different than past presidents, and so immediately obviously Fox News decided to come out and create these conspiracy theories about the Obama’s painting. Specifically the one with Barack Obama himself. According to Fox News host Sean Hannity, the official portrait of Barack Obama contains secret sperms, hidden, painted into Barack Obama’s face. And it’s because the artist once joked about killing Whitey, and somehow the sperm on the face and this person being anti white people, is all linked inside this painting.

In fact, Sean Hannity posted an article about this on his own personal website at hannity.com. And then he linked to it on Twitter. Here’s the headline of that piece, “Portrait perversion. Obama portrait features secret sperm. Artist jokes about killing Whitey.” Here’s the thing, after huge backlash from this, Sean Hannity decided to delete the article from his website, and he told the Daily Beast that, “his did not represent my beliefs, it wasn’t something that I agree with or met my standards, so we decided to take it down.” Really, it didn’t meet your standards, even though you literally tweeted it out? And told people to go take a look at it. Suddenly, after people say that you’re insane, it doesn’t meet your standards anymore.

Because you wouldn’t have promoted it, if you didn’t want people to see it, if you didn’t believe in what it had to say. But the secret sperm and all that nonsense that Sean Hannity is pushing proves that this man is only one step away from reaching Alex Jones’s level of crazy. And going on Fox News and telling us that the frogs are turning gay because of something Obama did. This is absolute, utter insanity on the part of Sean Hannity. He has now become the craziest person on Fox News. In the past, once Glenn Beck was kicked off the network. It used to be that Fox hosts would just lie about things, you know, they would distort reality, they would spin things in a way that was more positive for Republicans. But now, you have Sean Hannity on that network, who is actively pushing conspiracy theories, just to cover up for whatever horrible thing Donald Trump decided to do that particular day.

He’s trying to make a scandal out of Obama’s painted forehead, in order to distract us from the Rob Porter scandal. Or the Stormy Daniels scandal, or the Russia investigation, or any of the other horrible things happening with the Trump administration at any given moment. That is what Sean Hannity has sunk to. And this was never a guy that was clearly super stable to begin with, but what has happened to him in the last year, is absolutely embarrassing for anybody who works at Fox News. If you work on Sean Hannity’s show, if you work for his gross little website that’s pushing these conspiracy theories, you should not only be ashamed of yourselves, but you need to take a good hard look at your life and figure out where you went so wrong. And ask for Sean Hannity, I’m left to wonder if the guys has maybe suffered a massive head injury in the last 12 months.

Did something fall on him? Is he having problems at home? Does he have some kind of degenerative brain disease that we don’t know about? Because his descent into Crazy Town, has been one of the fastest that I think we’ve ever seen in all the years that we have been covering these crazy people on Fox News.