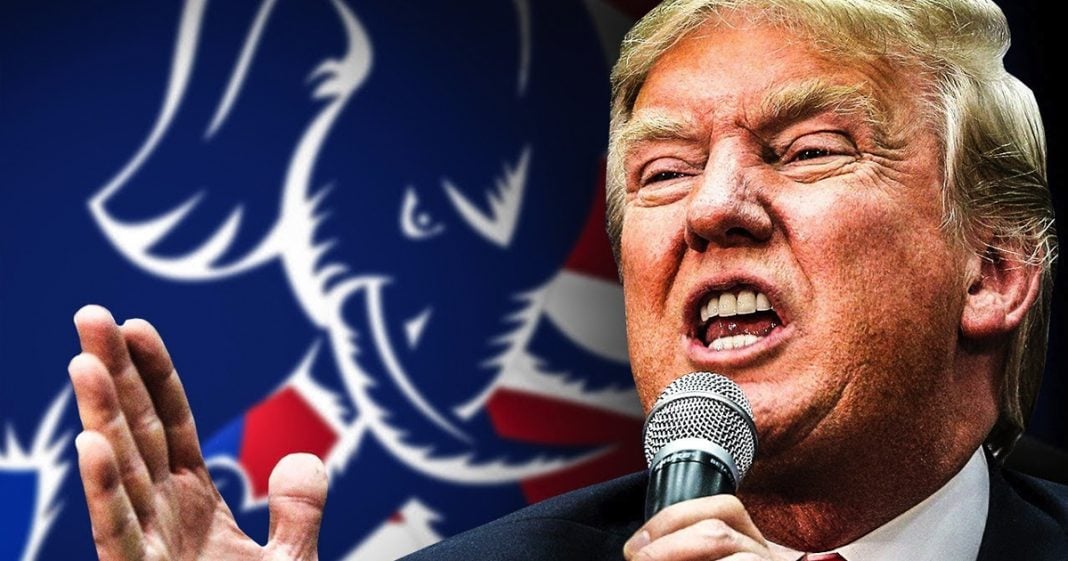 President Trump’s budget proposals are going to explode the deficit, a move that Republicans have told us is disastrous. Or at least, they’ve told us it was a disaster when a Democratic President tried to do it. The budget proposal, along with so many other things the president has done in the past month, have helped to expose decades of hypocrisy in the Republican Party, as Ring of Fire’s Farron Cousins points out.

To go along with Donald Trump’s budget release Monday, House republicans, members of the Freedom Caucus, which is the Tea Party group inside the House of Representatives, have said that the swamp won. Trump promised to drain the swamp, he refused to do it, his budget that explodes the federal deficit, is doing the exact opposite of draining the swamp and so the swamp has won.

Unfortunately, I have to agree with these people. I didn’t ever think I would ever have to say that I agree with these Tea Party nut jobs but I do because they’re 100% right about this. You know what’s even worse for these guys? Is that Donald Trump, in the last month, has blown up, completely proven to be false, decades worth of republican talking points.

During the Obama years, republicans were telling us how horrible deficits were. That the budget had to balance itself or else this country was going to fall into disrepair but, now, one year into the Trump Administration, we’re about to see the budget deficit explode by trillions, not billions, trillions with a T of dollars and they’re completely silent for the most part, other than a few of these Tea Party folk.

They say, “Well, it doesn’t matter.” Hell, Dick Chaney, when George W. Bush was in power is on record saying deficits don’t matter because when republicans are president, no, deficits don’t matter but, when it’s a guy like Obama who wants to spend a little extra money increasing aid for the needy in the United States, suddenly that money doesn’t exist and we can’t run a deficit. When it’s somebody like Bernie Sanders who wants to have debt free college or universal health care, republicans get up in arms saying, “How are we gonna pay for this, it’s just gonna explode the deficit?” Well, that’s bull. If deficit spending mattered, republicans would be voting right now to remove Trump from office but they only care about it, one, if it’s a democrat proposing it, or two, if it’s deficit spending that actually helps millions of American citizens. That’s what they care about.

We could, for the cost of this Trump budget, have had universal health care, debt free college, increases in the federal minimum wage up to $15, $17 and still spent fall less than what we’re spending on all these programs the President wants to spend on and we wouldn’t have had to make any of the cuts that the President is making. But, it’s not just the budget deficit talking point that Donald Trump has blown up here.

So, there’s no more of this. You know what? No more talk about deficits and how they hurt our economy, they do in the long run but, acting all sanctimonious about it and saying that when democrats do it, it’s bad and when republicans do it, it’s good. You’ve been exposed republicans, no more talk about immorality among democratic candidates or democratic politicians because the guy you put into the White House is more immoral than, I think, any other politician has been in my lifetime. All of your talking points are blowing up in your face and if you think that the American public doesn’t understand this, then you are in for a very rude awakening in this year’s midterms.