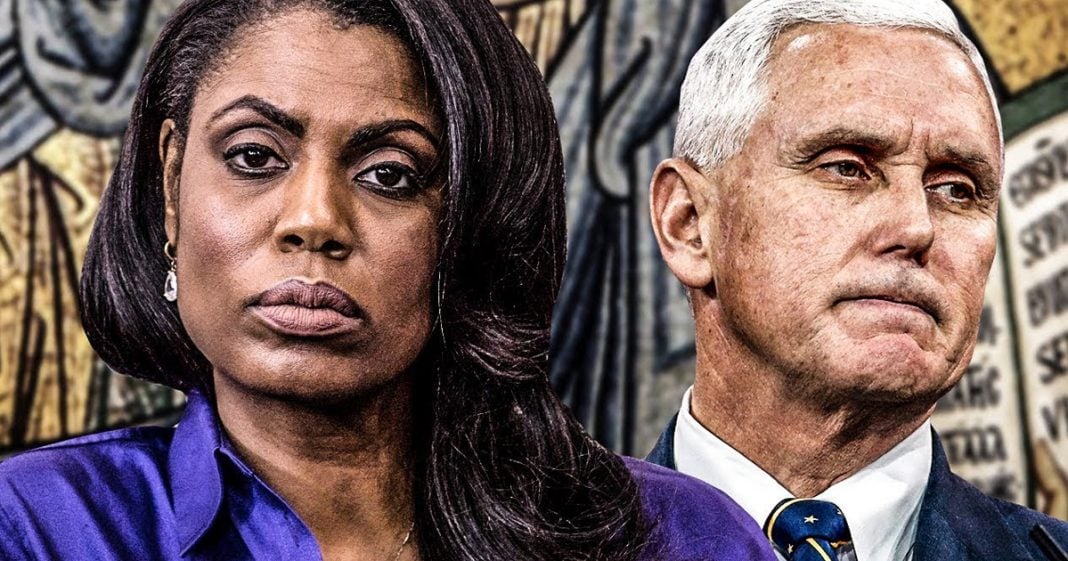 According to former White House staffer Omarosa Manigault, Mike Pence believes that Jesus is telling him what to say as Vice President. If true, this illustrates a very scary problem for American citizens, and it shows that Mike Pence has no clue how religion works. Ring of Fire’s Farron Cousins discusses this.

According to former White House staffer Omarosa Manigault-Newman, Mike Pence believes that Jesus is telling him what to say. Omarosa recently came forward and said that Mike Pence would tell her that Jesus told him to say certain things as President and Omarosa said that as a religious person herself she knows for a fact that Jesus is not actually speaking into Mike Pence’s ear and telling him to say and do the horrible things that Mike Pence does. Now, this entire story is predicated on whether or not we can believe what Omarosa is telling us. Given what we know about Mike Pence and his extreme penchant for religiosity, I think I’m gonna err on the side of Omarosa here and believe that she’s telling the truth.

I don’t think Jesus would support building a wall. I don’t think Jesus would support condemning those of other religions or races or sexual orientations as the Trump White House has also done. So, if there is somebody talking in Mike Pence’s ear that he believes is Jesus Christ, my advice would be for Mike Pence to go see a psychologist, go get a CAT scan, go get something done because there’s something not right in your head because everything that this White House stands for, everything that they have done so far since taking power goes directly against the very teachings that are in that Bible that they claim to love so much.

I think they need to actually pick up a Bible. Pick up a copy of the New Testament. Read through it, and maybe let that guide you if you want to base your entire administration on religion. Maybe stop giving tax cuts to the wealthy and start giving more money to the needy. That’s right there in the Book. But no, Mike Pence wants to continue thinking there’s some imaginary angel on his shoulder dictating his every word, looking over him and smiling upon him with approval.