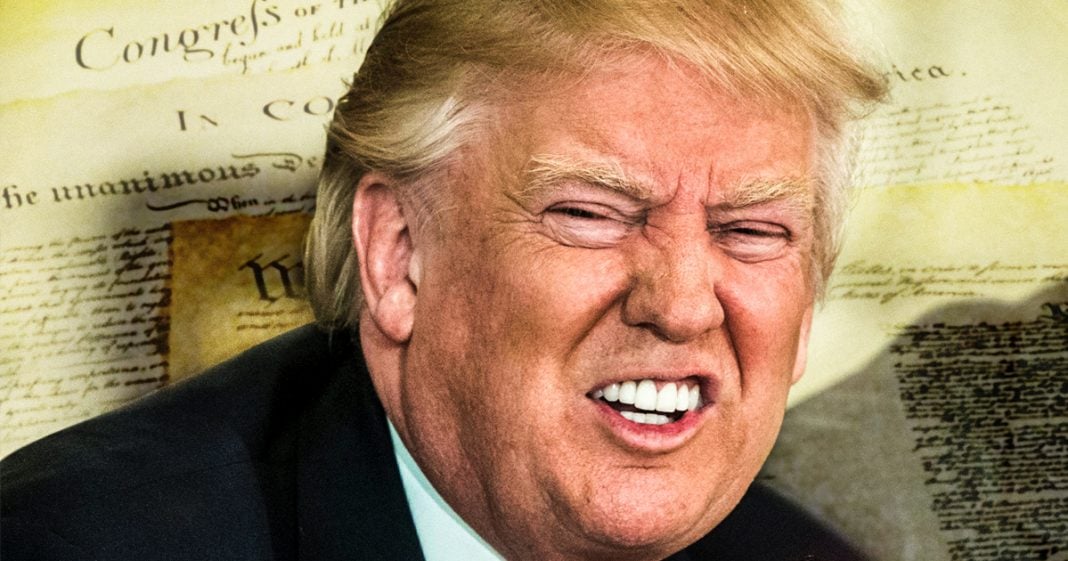 Farron Cousins takes twitter question from the Ring of Fire audience this week on the ROF podcast. Adjepatat @adswee asks, “Is there and other amendment in the constitution than #25 to get rid of the daily Trump show for good?”

Right now, I am taking questions from Twitter I’ve got one here from Adjepatat @adswee, who asks, “Is there any other amendment in the constitution than #25 to get rid of the daily Trump show for good?” Unfortunately, no. The 25th Amendment is the only one that deals with any kind of succession, or I guess removal of the President of the United States. I wouldn’t give up on the 25th Amendment though. I still haven’t given up on the 25th Amendment. I don’t think we need another one. I think what we need are Republicans in Washington, D.C., who are smart enough to understand not only the damage that Donald Trump is doing to our country, but the damage that he is doing to their party.

Look, I know a lot of people have probably thrown parties at their house, and how many times have you had a party, especially in your younger days, maybe sorority or frat days where you’ve got a really good friend, but maybe they’ve just had a little too much to drink, and so they start destroying things in your house, or wherever they are. And as much as you like that friend, you’ve got to say, “Look, you gotta get outta here because you’re destroying everything.” That’s what’s happening with Donald Trump and the Republican Party, right now.

The Republican Party is hosting this nice little party, and Donald Trump is the drunk friend who shows up and starting breaking TVs, and trying to steal your silverware. If they had the courage to stand up and say, “Okay, look. Here is all the evidence we have. We have all of these psychiatrists, all of these mental health experts telling us that Donald Trump is mentally unfit for office.” Let’s invoke the 25th Amendment, not just to save the country, but to save our party. We get Mike Pence, a guy who is easily controlled by the Koch Brothers. He is a pushover. He will do whatever Paul Ryan and Mitchell McConnell want.

It’s a win-win for the Republicans at that point, but they are so terrified of this bully that we have in the White House that they won’t even stand up for their own party. Instead, they’re resigning. They’re not running for office. “We’re retiring! Yeah, we’re outta here! Enjoy the Trump Show, ladies and gentlemen, good luck with that. We’re gonna go retire with all of our money, maybe become lobbyists, and make even more money. Sorry that this orange buffoon has ruined everything for everyone.”

If they had any courage, whatsoever, any scruples, any form of integrity, they would be invoking the 25th Amendment right now. It would be happening right now based only on Donald Trump’s mental fitness to hold office. The evidence that this guy is unstable is overwhelming. We have experts all over the country, ready and willing to testify that there is something wrong with him, with his personality, but they won’t do it. But that could change in November, and so that’s why I am holding out hope for the 25th Amendment because I know. I know that these Republicans are not going to do it. There is no way in hell any of these folks in D.C. on the Republican side have enough conviction to go up there and say, “Donald, your time is up. You’re not good for the country. You’re not good for the party. You’re not good for anything. It’s time for you to go, and we’re putting Pence in there, and he’s going to be our new little puppet.”

No one get me wrong. Pence is bad. He is not as bad as Donald Trump. I don’t buy that argument one bit. Pence is as bad as George W. Bush, and yeah, that’s bad. Bad! But nothing, nothing is as bad as Donald Trump. The racism, the sexism, the bullying. Mike Pence at least doesn’t have all of that. He’s got a lot of it. He’s got some bad policies waiting in the wings as well. But as it pointed out earlier, those policies, those can be undone. The damage that Donald Trump is doing, it’s going to take a lot longer for that to be undone.