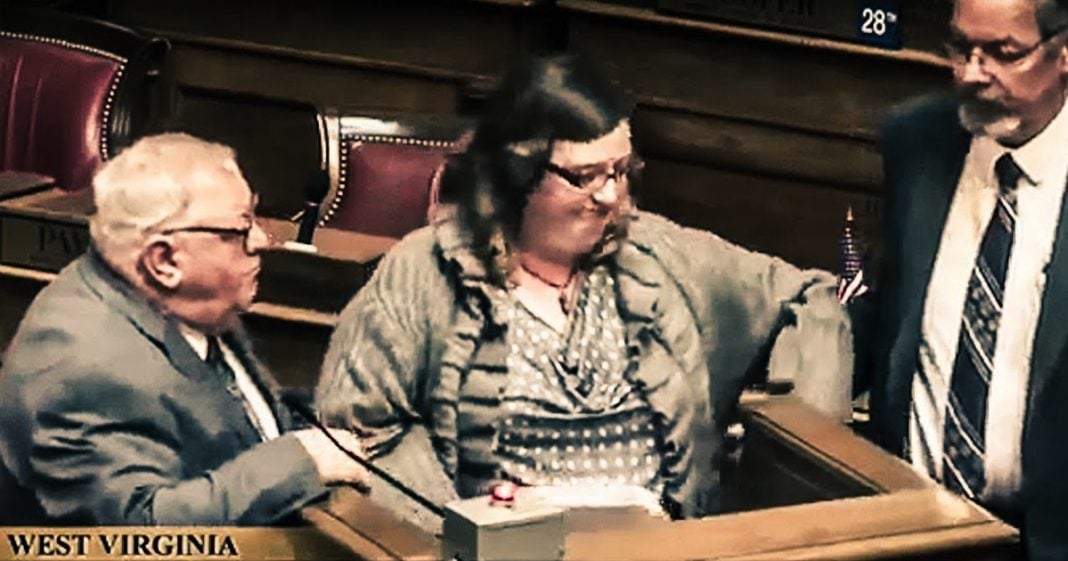 Lissa Lucas, a West Virginia resident that is running for the state’s House of Delegates, was recently dragged out of a public hearing for having the audacity to read a list of corporate campaign donors who contributed to the House members that were holding the hearing. The elected officials didn’t want to hear the truth, and they certainly didn’t want those names to be on the public record of their hearing, so they cut off Lissa’s microphone and had security escort her out. Ring of Fire’s Farron Cousins discusses what happened.

This past Friday in the State of West Virginia, the House of Delegates, specifically the House Judiciary Committee of the House of Delegates for the State of West Virginia, decided to hold public comment on a bill that would allow the fracking injury to come into somebody else’s property and drill there without that land owner’s consent. Lissa Lucas, a woman who’s actually running for the House of Delegates, decided to use her time on the floor to read a list of the oil and gas company donations made to members of that House Judiciary Committee, and it went pretty much exactly as you would expect it to go. Take a look at what happened to Ms. Lucas in this video.

For example, and I have to keep it short simply because the public only gets a minute, 45, while lobbyists can throw a gala at the Marriott with whisky and wine and talk for hours to the delegates. So to keep it short, on the Judiciary Committee, Charlotte Lane, about $10,000 from gas and oil interests including AEP, Marathon, FirstEnergy, Dominion, EQT, and I could go on. His money comes… including Dominion, EQT, FirstEnergy,… I want to finish.

Speaker 2: No, your microphone is off.

Lissa Lucas: Drag me off then. People deserve someone who can fight for the people and not corporations… information, I’m very sorry that…

Speaker 1: The next speaker would be-

So as Lissa Lucas is sitting there reading these names, they decide, first and foremost, they’re going to cut off her microphone so she can no longer speak or at least so nobody can hear her. Then security comes over, tries to get her out, and she says “Well, you’re going to have to drag me out.” They did exactly that. And the whole way, as you can see in the video, that she’s being dragged out, she is trying to try the truth. The truth is that that House of Delegates is owned by the oil and gas companies, and it’s no different across the country. It’s no different in Washington D.C.

What this woman was trying to do was read it into the House record so that everyone could see it. You wouldn’t have to go searching campaign donation websites because, once again, at the state level, it’s a little bit trickier to navigate those. She wanted everyone to know why this House of Delegates was sponsoring this particular piece of legislation to essentially take away your property without your consent and give it to the fracking industry.

This is the kind of person that we need in the government, somebody who understands the damaging effects that campaign money has on policy. That is what we need, not just in West Virginia but all over the country and certainly in Washington D.C. People like Lissa Lucas scare the hell out of Republicans, and they should because if more people were like her, if more people understood who was buying our politicians and what they were getting in return, then maybe we’d get some reforms on the books. Maybe we’d take corporate campaign cash out of elections because the more that people understand this issue, the more they want it gone.