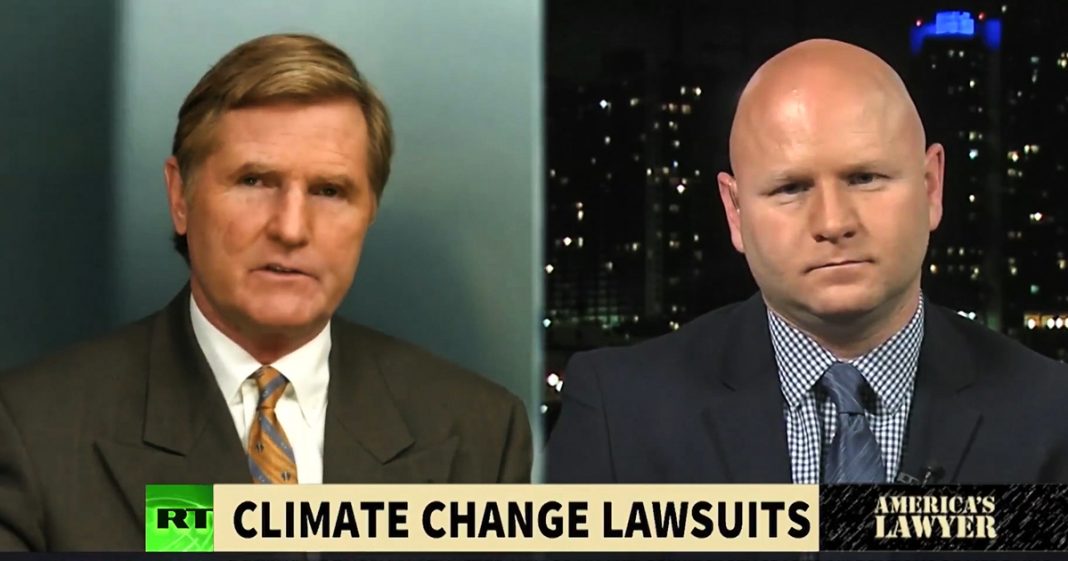 Via America’s Lawyer: Mike Papantonio and Farron Cousins discuss climate change lawsuits from U.S. cities that aim to have fossil fuel industries pay the damages that are expected to turn out.

Mike Papantonio: Recently the city of Richmond, California became the ninth US city to file a lawsuit against oil companies for their role that they played in destroying the planet, specifically, the city is suing these companies because they’re contributing to rising sea levels that are going to have a major impact on the city that’s surrounded, it’s surrounded by water on three sides. They have a problem.

The lawsuit filed by the city of Richmond as well as other states that have filed lawsuits are important because they may be our last best shot at preventing some of the worst consequences of climate change. The United States has never had a clear policy when it comes to dealing with the threat of climate change. Even though President Obama and President Bush told us that climate change was real, neither of them, neither of them laid out a clear strategy or enacted any policies that would have provided relief for the warming planet. Instead, every positive step that was taken was met with two pro industry steps backwards which has led us to the crisis that we face today.

For too long, oil companies have understood that the threat of climate change and their role in the disaster, they’ve understood the connection and they did everything possible to cover up those dangers. But as more and more lawsuits are filed against oil giants like Exxon and Chevron and BP, we just might finally make some meaningful advancements to help protect both the planet and the citizens who are threatened by this problem.

Joining me now to talk about this is Farron Cousins, the executive editor of The Trial Lawyer Magazine. Farron, start by telling us exactly what these lawsuits are about, lay it out for us.

Farron Cousins: Well basically the city of Richmond, California and the other eight cities that have also filed lawsuits like this, they’re saying that the oil industry is directly responsible for the rising sea levels that is threatening the livelihood and basically the very existence of these cities and they say that because of the contributions that these companies have put forth to make the air dirtier and to cause the climate to warm and the sea levels to rise, they are responsible for the damages that we are currently seeing and the even worse damages that we know are right around the corner.

It’s a very unique lawsuit. What they’re going after here is they’re finally doing it basically the right way. They understand that the science now can tell us that yes the oil industry is directly responsible for the rising emissions that are then directly responsible for climate change and rising sea levels. Therefore, the damage that we’re seeing in our city, in the city of Richmond, in the city of other, the other ones that have filed lawsuits, they say that this is directly related to your activity and that is why we’re coming after your infrastructure, our roads, our bridges increase salinity, it’s all because of you.

Mike Papantonio: Well, Farron, if they don’t pay for their further damage, they externalize all these costs to everybody else, and taxpayers, the people watching this program end up paying for all of those damages. It’s like a company that pollutes a river or a stream and then taxpayers have to end up paying for it. That’s called externalizing cost and that’s what these companies would like to do. Exxon, they’ve known about this for so long, with their own internal scientists, their own scientists have said you know what, and this was decades ago, decades ago their own scientist says, yes, climate change is real and yes we’re causing it with our fossil fuels. Does this tactic by these cities seem like a viable legal strategy when you compare it to other lawsuits that you’ve covered?

Farron Cousins: Oh, 100%. And again, they’re finally doing it the right way. For years I’ve had people ask me, why can’t we just sue the fossil fuel companies for climate change. And well, the answer is because the average person doesn’t necessarily have a complaint. We understand what they’re doing but you can’t show any physical damages. So what these cities are doing is they’re taking a page out of the tobacco lawsuit playbook and the opioid lawsuits playbook and they’re saying, okay, you’ve caused this damage that we as a city, our population, our taxpayers, we are now on the hook for these damages. Just like with tobacco with the people having the lung problems. The taxpayers ultimately pay those costs. We’re doing it right now with opioids.

So these cities looked at those and said this was a winning strategy for these suits, we can do it for climate change because the same thing is happening here. Oil companies responsible for the damage, we’re responsible for the cost and that’s not fair. You guys have billions upon billions of dollars, you’re going to come fix the damage that you caused and that is absolutely a winning strategy for these cities.

Mike Papantonio: Right. So what you’re able to do is you’re able to put on the stand in a trial an economist. And the economist has a model. The model says here’s what it would have cost taxpayers just to maintain this coast, to maintain this bridge without this problem. We now know the problem is related to the conduct of Exxon and BP and these other oil companies. So now it’s going to cost us eight billion dollars for example to figure out how we’re going to keep salt water from intruding into the fresh water down in south Florida.

So they’re able to say we know exactly what it’s going to cost, we know what the solution is, here are the experts that say how we’re going to solve it. Here are the things we have to build, here are the things we have to do to protect ourselves and it’s got to cost eight billion dollars. So why should taxpayers pay eight billion dollars when these oil companies made more money then 100 third world countries every single year, year in year out at the cost of taxpayers.

What are the other chances Farron of other cities joining in to these lawsuits? Are you seeing an interest build here?

Farron Cousins: I believe we will very soon. There are 414 cities and towns across the United States that right now are trying to come up with some kind of climate change plan because they understand that in 50 years they will be under water. We have cities in Louisiana, Isle de St. George or Jean Charles, excuse me, that is currently trying to relocate every single resident of their little island city because it’s going underwater today. Not in 20 years, not in 10, today, they’re trying to relocate the entire city. We have about 13 other cities facing the same exact problem where five to 10 years from now that city won’t exist.

So a grand total of 414 cities right now in the United States alone that are looking at massive relocation because in 50 years they won’t exist. One of them you mentioned in south Florida happens to be the city of Miami that may not be around in 50 years. So I think we’re going to see a lot more states join in with this especially once discovery begins and we get to see more of those documents.

Mike Papantonio: Once we see document, once we see document. Here’s what we know, here’s what we know already, Farron. We know that internally Exxon created about 140 articles and papers that were created by their own scientists. They were created by scientists that they paid for or in-house scientists. We know that 80% of the information in those articles, those papers pointed towards two things. Climate change is real and our conduct is causing that climate change.

And then we know that when it came down to it they only released about 10 or 12 percent of that information to the public and then what they released they tried to really downplay. Is there any doubt in your mind, just in what you’re seeing so far that the companies listed in these lawsuits knew the dangers of climate change and they understood what kinds of damage they were causing. Does it really take a rocket scientist to understand that.

Farron Cousins: Documents have been released from Exxon I believe dating back to the 1940’s was when their own scientists started to look at the emissions they were putting out and saying you know what, this could cause the planet overall to warm. Now this was 35 years before you had Dr. James Hansen go to Congress and explain what climate change even was to Congress and to the American public. Exxon was essentially the very first people to ever become climate scientists and they saw the damage back then nearly 80 years ago and decided, look, we can’t let this get out because this is going to destroy our company, it’s going to destroy our whole industry so we’ve got to cover it up. And they had a good 35 year jump on the rest of the world when it comes to covering up climate data and that’s why we’re in the position we’re in today.

Mike Papantonio: I think what you’re going to find to add to what you just said just having handled similar cases like this because you know, I’m handling the opioid case, we handled tobacco. We know how these things go. What happens is the first lawsuit you get 10 great documents. The next lawsuit, that turns to 40 great documents and before you know it you have these documents that make it very clear that the people who were making this decision, they had children, they had grandchildren. They understood exactly what it was going to mean for great grandchildren. You start really understanding the mentality of these freaks who make this decision to say, yeah, all we can worry about is are we going to get another paycheck. Am I going to get a big bonus as the CEO? I can’t really worry about the future.

In your opinion, are these lawsuits the catalyst that we’ve been looking for to finally get some meaningful environmental, some progress, maybe even with this president that we have. What’s your take?

Farron Cousins: Well, within the last two years we’ve really seen lawsuits about climate change really start to ramp up and this latest round of these cities suing the oil giants is just again the latest in this. We have children that have banded together. Our Children’s Trust who are suing the federal government for their lack of action. These lawsuits are essentially all we have left.

Democrat or Republican, doesn’t matter who is president, we haven’t had any meaningful action. We’ve had no policy. The few things that did happen like the Clean Power rule, that was offset in the Obama years by massive expansion of coal extraction. So, we haven’t had anything. We need something and the only thing these companies understand is taking away their money.

Farron, thank you for joining me, okay.