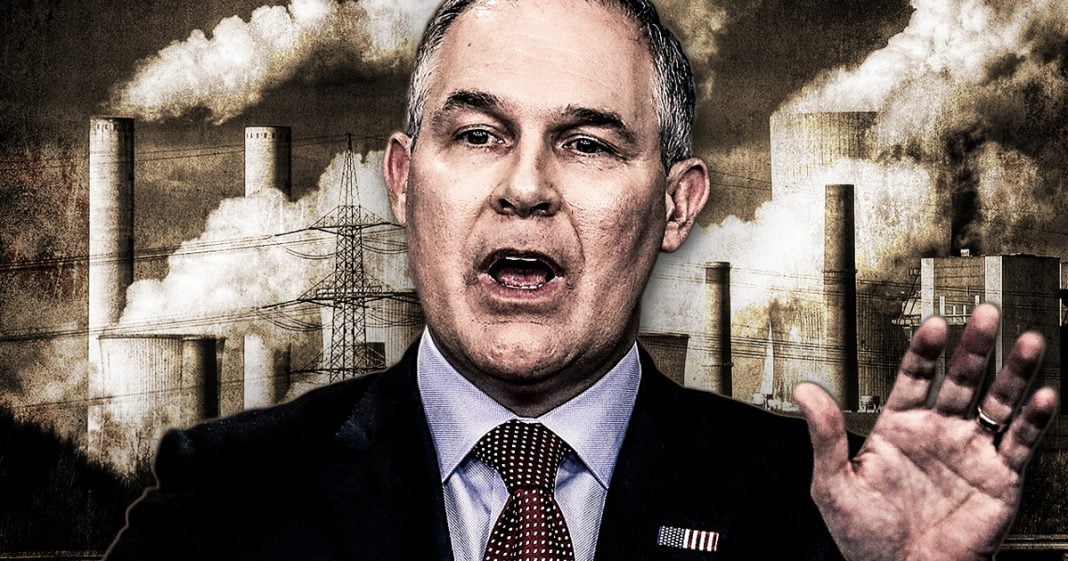 According to Scott Pruitt, the head of the EPA, climate change might actually be beneficial to human beings, as humans have always thrived in warmer climates. Not only is that historically false, but his narrative that climate change is good for us is exactly what fossil fuel companies would like for us to believe. Ring of Fire’s Farron Cousins discusses this.

Early this week during an interview with a Nevada TV station, EPA administrator, Scott Pruitt, basically the guy in charge of environmental policy for the United States said that global warming, climate change, might actually be a really good thing for human beings. This is exactly what he said here. “We know human beings have most flourished during times of what? Warming trends? I think there’s assumptions made that because the climate is warming that that necessarily is a bad thing. Do we really know what the ideal surface temperature should be in the 20100, in the year 2018? That’s fairly arrogant for us to think we know it exactly what it should be in 20100.”

So, in a round about way, in a seemingly scientific way, Scott Pruitt is trying to tell us, look, when it’s warmer, when everything’s a little hotter, when we don’t have to wear our jacket, human beings do better. There’s just one problem with that. Human evolution says that no, no, that’s not true whatsoever. Human beings do thrive in warm temperatures but we also, occasionally, need those cooler temperatures. That’s where human beings help to spread out throughout the world.

You see, parasites, even bacteria and viruses have a much harder time flourishing in cold environments than they do in warmer, say tropical, temperatures. That’s something Scott Pruitt left out. The scientific data is all there. No, human beings didn’t do better throughout human history in warmer times but what Pruitt is doing here, I guess, is back handedly admitting that, yeah, climate change is real but, don’t worry because it’s going to be totally awesome for everybody.

This is actually a very common republican talking point. It’s something we saw during the Bush years. We’ve seen it from republicans ever since then, telling us that, “Hey listen! What if the planet’s getting warmer? Isn’t that better? No more snow days. How cool would that be? There’s going to be new shipping lanes opening up in the Arctic as the ice melts so, we can get goods from one place to another even faster. That’s fantastic!”

Scott Pruitt, the guy who’s supposed to be in charge of protecting the environment in the United States goes on this Nevada TV station, acts like a complete jackass and tells the world, you know what, maybe it is getting warmer. We don’t know but if it is, that’s going to be such a great thing for humanity.

No, what’s going to be a great thing for humanity is when countries like the United States once again emerge as a global leader on the issue of climate change, and we expel every single science denying republican or democrat if there are any, from our politics and finally move forward with science based, reality based environmental policies.