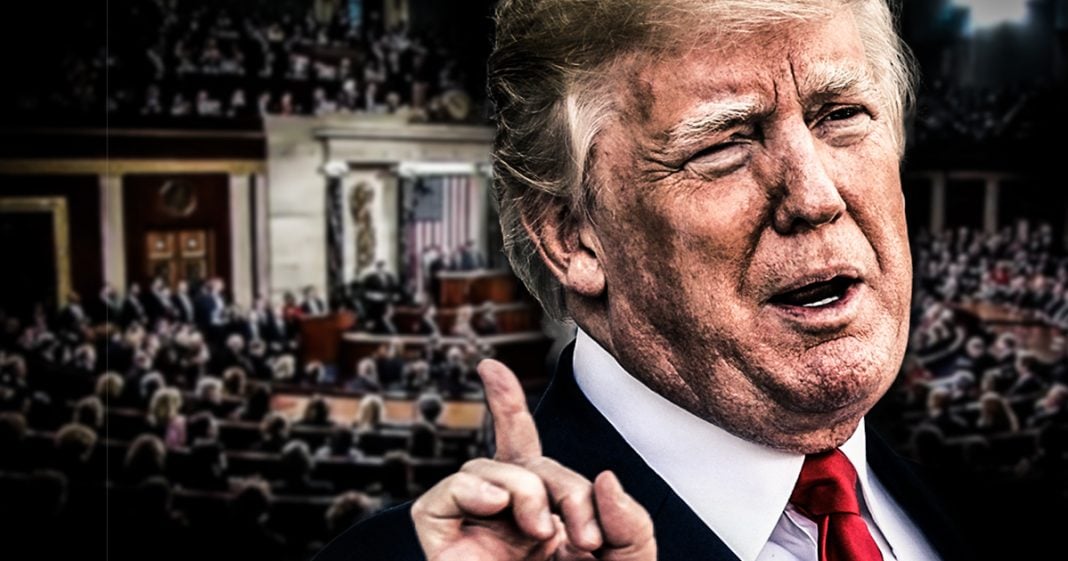 Donald Trump is already planning his 2020 Presidential bid, and his campaign released their first ad this week. The ad plays clips from Trump’s State of the Union while splicing in clips of Democrats just sitting there and not clapping. The footage is edited in a way to make it look like Democrats are disrespecting the American people and that’s exactly what Trump wants. Ring of Fire’s Farron Cousins explains why Trump’s propaganda is dangerous for this country.

Donald Trump has already released his very first Donald Trump 2020 campaign video, and it is every bit as stupid as you would expect it to be. Take a look.

Trump
Tonight, I call upon all of us to set aside our differences, to seek out common ground, and to summon the unity we need to deliver for the people we were elected to serve. We have created 2.4 million new jobs. Unemployment claims have hit a 45-year low. African-American unemployment stands at the lowest rate ever recorded. This, in fact, is our new American moment. There has never been a better time to start living the American dream.

There’s several interesting things to point out during that video. While they’re showing Donald Trump’s clips from State of the Union, they’re showing the Democrats from the State of the Union. The clips don’t match up. That’s not what was happening in real time. This was specifically edited, so that Donald Trump was saying great things, and Democrats were sitting there, not clapping, looking pissed off and unhappy. There were plenty of times during that speech, where Donald Trump would say things that were positive, even if they weren’t true, and Democrats would clap a little bit.

First of all is you have deceptive editing in this propaganda ad designed to make Democrats look like they hate American people, like they hate any advancement made by this President but, more importantly, Donald Trump, even in this video, as he did in the State of the Union, because it’s the same thing, he’s taking credit for things that, one, he didn’t accomplish and, even worse, sometimes aren’t even true. Yes, the African-American unemployment rate is down but, but, it actually fell a hell of a lot faster and more significantly during Barack Obama’s presidency. When Trump took office, the unemployment rate among African-Americans, it continued to go down, but at a much slower pace. It’s starting to level off.

He doesn’t give Obama any credit for that whatsoever, so I’m not going to give him any credit for that whatsoever, because up until about October, we were still operating on Barack Obama’s federal budget. Donald Trump’s responsibility didn’t really kick in until mid-October or so. Nonetheless, this propaganda style video that’s trying to paint Democrats as anti-American is going to work with some Conservatives. They’re going to see this poorly edited piece of crap, and they’re going to think that, yes, Democrats hate America. Wow, why didn’t I think of that. I’m so dumb. Let me go vote for Donald Trump again in 2020.

That’s what’s going to happen. It’s what always happens. That’s why Donald Trump even got elected in the first place, but Democrats have to understand what they’re fighting back against. You’re not going to beat this guy on a war of the words. You’re not going to beat this guy with campaign ads. The only way you can defeat him is with policy. You cannot, unfortunately, stoop to his level. That’s what you have people like us for. We can.

This deceptive campaign ad is nothing short of propaganda, and hopefully enough people who see it will realize that that is exactly what it is. It’s not based in reality. It’s about Donald Trump’s fragile ego being a little bit bruised, because not everybody in the world wanted to give him a round of applause when he gave his State of the Union address.