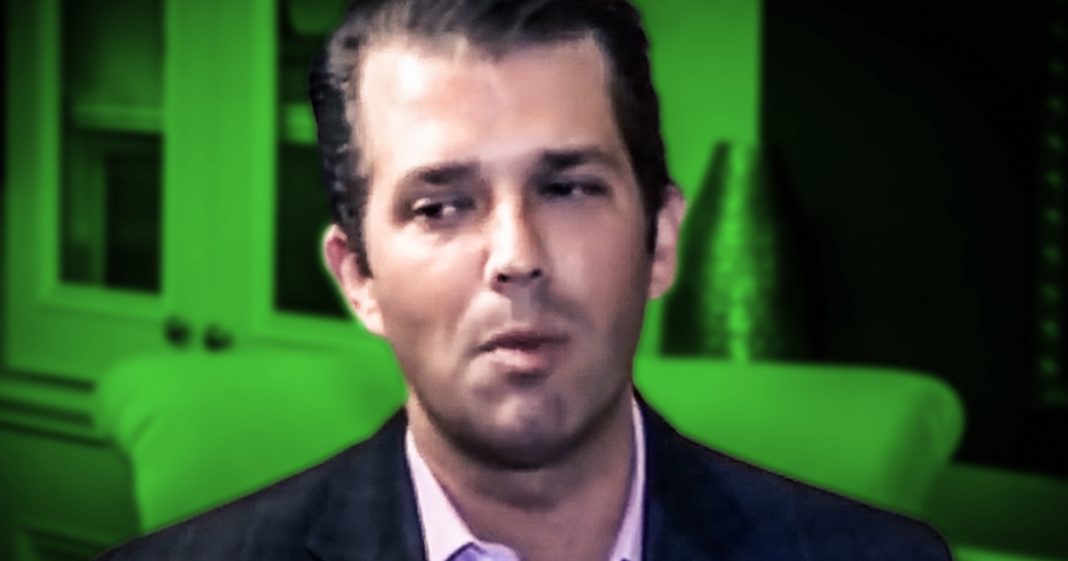 During a recent interview with The Daily Caller, Donald Trump, Jr. defended his father against claims of racism by saying that he can’t be a racist because all the “rappers” and other African Americans want to get their pictures taken with him. Someone needs to explain to little Donnie how racism actually works, and Ring of Fire’s Farron Cousins attempts to do just that.

Recently Donald Trump Jr. sat down with Daily Caller to talk about the fact that no, his dad is not racist and I have proof that he isn’t. Take a look at this interview.

What do you think about the left’s efforts to frame your dad and anyone who supports your dad as a hater, as a racist, as a fascist? This is a cultural phenomenon and there’s fear spreading across the country of being able to say what you really believe.

Well, I think it’s terrible for a couple of reasons. I said this on the campaign trail when it was so obvious that was sort of the game plan, “We’re going to smear you with racist, fascist,” whatever. The real problem is those things exist, certainly racism exists. But if it’s your response to any argument you can’t win. You actually do a real disservice to those people actually afflicted by it, to those people who are actually oppressed and hurt by real racism, by real sexism.

So if you use it every time what really happens is, and in the real world really happens is, people hear it, they roll their eyes, and they move on, because they realize it’s nonsense in this case. The problem is when people who are actually affected by it say it doesn’t matter anymore, it’s lost its effect because it’s numbing to people. You can only overplay your hand so many times before people start calling your bluff. So it’s actually doing nothing on the positive side of being able to promote that as a real issue, and what it’s doing, on the other side, is it’s hurting those that are actually afflicted by it.

So it’s been terrible to watch, because I know him, I’ve seen him my whole life, I’ve seen the things he’s done. It’s amazing, all the rappers, all the this, all his African-American friends from Jesse Jackson to Al Sharpton, I have pictures with them their whole life, we say hi, always been friends. It was only ’til he got into politics that all of a sudden, “Oh, he’s the most terrible human being.”

And furthermore, Donnie Jr., nobody calls them rappers anymore. We stopped using that word in the ’90s. It’s hip hop now. Get with it a little bit there, okay guy? More importantly, you are literally using the same excuse that republicans have been using for decades now, like, “Oh, I’m not racist, I have a black friend.” That’s not what racism is. That’s not how racism works.

Racism is systemic oppression of one group over another. That’s what we’re looking at here in the United States today, and yes, your father is bolstering it by referring to neo-Nazis in Charlottesville as some very fine people. That’s racism. A person was killed and your father still said there was some very fine people there. All those morons in their khaki pants and tiki torches, very fine people, marching against black people because they believe they are the superior race.

Your father has fed racism every step of the way since he came on to the campaign trail. There is no denying that. Study after study after study has proven that. They have proven that a good portion of Trump voters do view blacks as somehow inferior. So don’t sit there, giving an interview to a friendly source saying, “No, my father is not a racist. He got his picture taken with Al Sharpton.” That’s about as non-racist as you can get, right? Well no, you need to have a better understanding of what racism actually is because it can’t be cured with a picture with Al Sharpton.