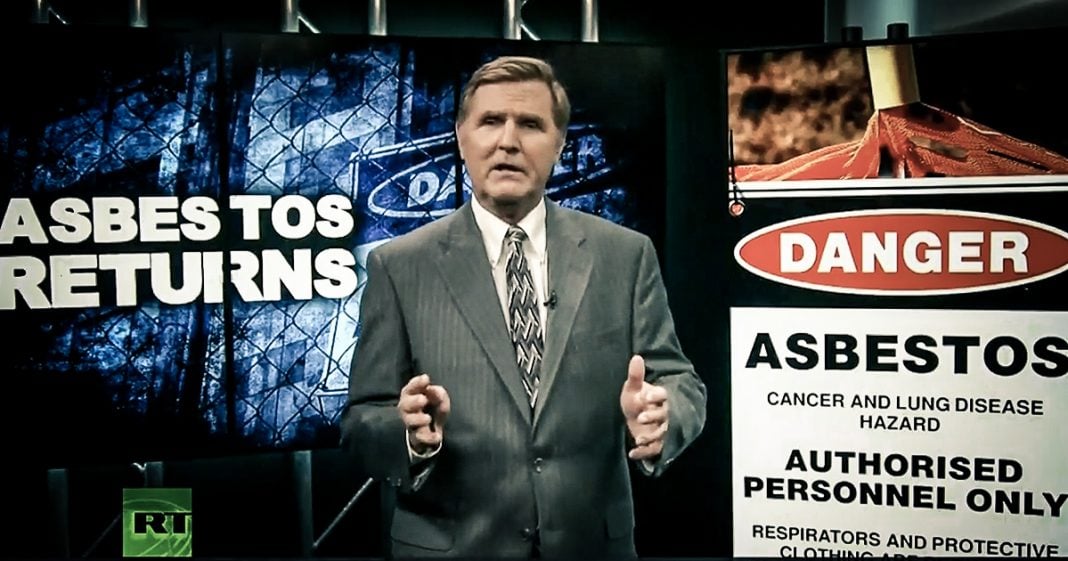 Via America’s Lawyer: Most people in the United States are under the impression that our government banned the use of asbestos decades ago, but the truth is that’s a lie. Asbestos is still widely used in many objects that you use every single day and to make things worse, the amount of asbestos that we import into this country has doubled in the last two years. Mike Papantonio, host of America’s Lawyer, discusses this with Farron Cousins.

Mike Papantonio:
For more on this, I’m joined by Farron Cousins. He’s the executive director of The Trial Lawyer magazine. Farron, let’s start by talking about some of these documents from the asbestos companies. I’ve seen them. As you know, I used to try these cases. I probably tried more asbestos cases than most lawyers in this country. I’ve seen the massive cover-up, but why don’t you describe what you’ve seen, just in getting ready for this story?

Farron Cousins:
Well, I think what’s interesting about these documents is that they really … As you pointed out, they laid the foundation for how all corporations after asbestos began to handle any problem that they had. The one you mentioned with the former president of Johns Manville, he wanted workers to die on the floor of his factory, because it would save them money so they wouldn’t have to pay out any kind of disability claims or anything like that. Just die on the factory floor, because we’re not going to tell you about the dangers. That is the level of callousness and absolutely borderline criminal disregard for human life that we’ve really seen in any corporation.

Again, other companies looked at this, and rather than saying, “Wow, what an atrocious way to behave,” they looked at it and said, “You know what, let’s copy that formula. Let’s cover up the dangers.” We’ve seen it with Monsanto and Roundup. They don’t want their employees to know how dangerous this is. Same thing with Johnson & Johnson and talcum powder. They don’t want their employees to know how bad it was. We’ve seen that in documents that have been released. That is all coming directly from this asbestos industry playbook that’s been revealed in these documents for the last 40 years.

Mike Papantonio:
Farron, the blueprint for how US corporations these days go about the ugly, ugly, ugly things they do to workers and to the general public, to consumers, that it’s your theory in reviewing all this that the blueprint really came from the asbestos litigation. How long, for examples, had the companies known about these dangers? I think it was around 1900, but wasn’t it pretty clear in 1900 that they not only knew about how dangerous it was, but they also knew, and this is interesting, that it would take 20 years for somebody to die of asbestosis or to die of mesothelioma?

It might take 20 years for them to die, so by then, the company would have made a lot of money. That worker would be out of the way. They wouldn’t be a problem, and they would just die in their home somewhere without ever knowing what killed them. Let’s fast-forward to present day. The US has imported more than 700 tons of asbestos in 2016, and that’s more than twice as much as the year before. Most people think asbestos was banned back in the ’70s, but that’s not even close to the truth, is it?

Farron Cousins:
Oh, absolutely not. What’s really interesting about the asbestos story, you really nailed it there, is that people think we stopped using this years and years ago, decades ago. Back in the ’70s, we got rid of all the asbestos. Well, no. Asbestos imports to the United States are increasing. Asbestos use in other countries, Russia, China, India, is increasing. It’s like we’re stuck in a time loop. We’re going back to depending on this very dangerous substance that we know and have known for well over 100 years, if you are exposed to it, if you inhale it, there is almost certainty that you’re going to get asbestosis, mesothelioma, from it.

The EPA back in the ’70s told the public, “Look, we’re going to handle this. We know it’s a problem. We know it’s killing people and giving them cancer. We’re going to take care of this. Don’t worry about it.” That was essentially the last the public knew about it, because then they spent 10 years, $10 million, going through this study just to reconfirm what they’d already known for close to 80 years. In ’89, they come out with these strict regulations, say we’re joining the rest of the world finally and we’re going to get rid of this stuff.

Well, of course, the asbestos companies didn’t like that, so they took it to court. The Fifth Circuit, I believe it was somewhere between ’89 and ’91 when they finally ruled on this, said, “You know what, we agree 100% with you, EPA, that this causes cancer, that this substance kills people when they come in contact with it. But gee, this isn’t the least burdensome solution for the asbestos companies, because it’s going to hurt their profits.”

Mike Papantonio:
Yeah. Well, let me talk about that in just a second.

Farron Cousins:
The Fifth Circuit in that decision literally said, “We’re putting profits over the lives.”

Mike Papantonio:
It was a justice by the name of Posner out of a different circuit. He came up with what he calls the economics of law. He says, “Yeah, sometimes a corporation will do bad things. They’ll kill people. They’ll poison people. They’ll destroy rivers and streams. Yeah, they’ll kill them with asbestos or they’ll kill them with a pharmaceutical. But we have to look at the economics of it. How bad does it hurt that company? If it hurts the company, are we putting people out of jobs, ignoring the fact that people might be dying by the tens of thousands because of something like asbestos?” Tell us how badly the federal government messed this up, Farron.

Farron Cousins:
Well, they had all of the evidence that they needed. They had $10 million worth of documents that they had produced. They had 80+ years of doctors telling them that this stuff will kill you. At the end, they went ahead and gave in to the lobbyists. They gave in to the court decisions. They didn’t go and fight it further like they could have. Now in recent years, I believe the last attempt in the United States to make asbestos completely illegal was in 2007, so a decade ago.

A decade ago, politicians just said, “You know what, we’ve been trying. We tried basically every five years,” because the time before that was in 2002. They just said, “To hell with it. We’re giving up. Go ahead and use your asbestos.” Look, let me point this out. Again, people think asbestos was ended in the United States a long time ago. It is in virtually every component in your car, in your brakes, in your piping, in your linings, in your rotors, in your transmission, filled with asbestos. The workers who make those parts are exposed to asbestos every day. The piping in your house, the shingles on your house, the vinyl flooring in your house, that is made using asbestos. The workers who make those are exposed to it.

15,000 American citizens every year die as a result of mesothelioma from asbestos. We’re upping our imports. Other countries are upping their imports, redoubling down on this thing that we have known for well over 100 years is going to kill you. In fact, a very interesting thing I found in the research of this, they found ancient documents from the early years AD, 1 or 2 AD, from the ancient Romans that actually identified this as well. They noticed that people who worked with it were dying.

Mike Papantonio:
Interesting part of this, Farron, is that there’s documents, what I used to use in trial, where the document would make it clear that the manufacturer understood that it would be 20 to 25 years before these people started dying. We actually saw companies planning on what they were going to do year 10. They were going to move into a different area. They were going to change the name of the company. Part of the program was they also said, “We’re going to go and move into bankruptcy when really a lot of people start dying.”

That’s exactly what they did. The Johns Manville moved in bankruptcy. Pittsburgh Corning, Owens-Illinois, all the big companies moved towards bankruptcy. They had billions of dollars. It wasn’t that they were really out of money, but they went to some of these federal judges. The federal judges up in the Southern District of New York said, “Yeah, you know, you have all these cases. You have a lot of money right now, but in a few years, you might not, so we’re going to give you bankruptcy protection,” even though the judge understood that 10 years before, they had written that, “Yeah, we know people are going to be dying. When they start dying, we’re going to move towards bankruptcy protection.” Farron, thanks for joining me. This is another ugly story that we simply don’t hear about in corporate media.