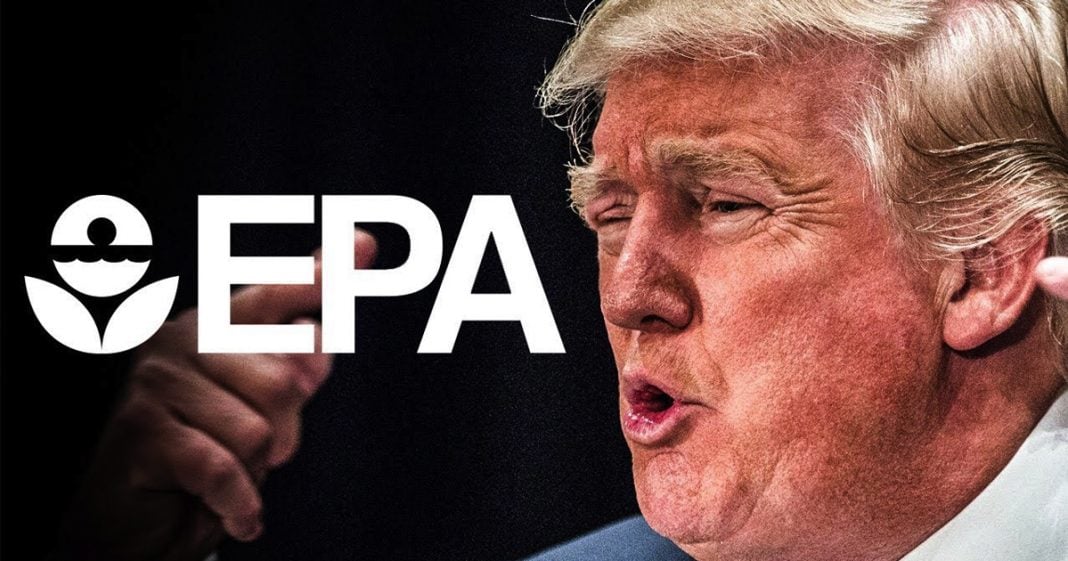 We knew at the start that Donald Trump wasn’t going to be the kind of president to take environmental issues seriously, but under his leadership, the Environmental Protection Agency has issued fewer enforcement actions than it has in the past decade. The agency is not doing its job, and that means that our air is getting dirtier, our water more polluted, and our health is suffering. Ring of Fire’s Farron Cousins explains why this is happening.

Under President Donald Trump, the Environmental Protection Agency has decided that they don’t have to do the job that their agency is tasked with. According to recent reports, enforcement actions from the EPA are at their lowest levels than they have been in the past decade, meaning it wasn’t since the Bush administration when we had those oil guys running the country that the EPA did so little. Civil enforcement actions at the EPA are down already 20% in just the last year, which means that polluters are getting away with poisoning our air, poisoning our water, poisoning our soil. The EPA is doing absolutely nothing about it.

We’ve talked a lot about climate change, and how the EPA’s not addressing that. Let’s move past that for a minute, because this isn’t even necessarily about protecting the environment of the entire planet. Let’s just talk about the public health issue that the US EPA is creating here on American soil. By not punishing corporations who break the law, and yes, according to the study, it’s not that corporations are breaking the law 20% less than they were last year. It’s that they’re just not being fined or held accountable when they do it.

Scott Pruitt, as the head of the EPA, does not believe in enforcement. We saw that during his time in Oklahoma, where he made it a practice to repeatedly sue the EPA for the rules that they were coming out with, because he argued they hurt the industry too much. Now he’s in charge of that agency. Now rather than working from the outside on behalf of corporations, he’s working from the inside at the head of the organization. He has kicked scientists out of the EPA and replaced them with industry heads, CEOs and shareholders from these major corporations that make a living off poisoning us. That’s what’s happening at the EPA today.

The Supreme Court many years ago ruled that, yes, the Environmental Protection Agency has a constitutional duty to actually enforce the rules that it has on the books. That’s why they’ve been working overtime to try to get those rules off the books so that they don’t have to enforce them, because they know that legally they’re required to do so. But still, that hasn’t stopped them from not enforcing any of the ones that they have.

You and I are the ones that are going to pay the price. Those chemicals that go into the air, and the water, and everything else, we’re the ones who are going to develop cancer from that. We’re the ones who are going to develop asthma or have asthma attacks as a result of our dirtier air. These people that live in the gated communities, they’re far removed from the toxins that corporations are putting out there. Those people in DC, in the House and Senate, and all of those government agencies, they’re not breathing this in, and they’re not drinking it in every single day, but we are.

That is one of the most important things that we need to remember as a country the next time we head to those voting booths. The Republicans led by Donald Trump and Scott Pruitt are perfectly fine with letting corporations poison us if it means that those corporations can save a few extra dollars every single year.