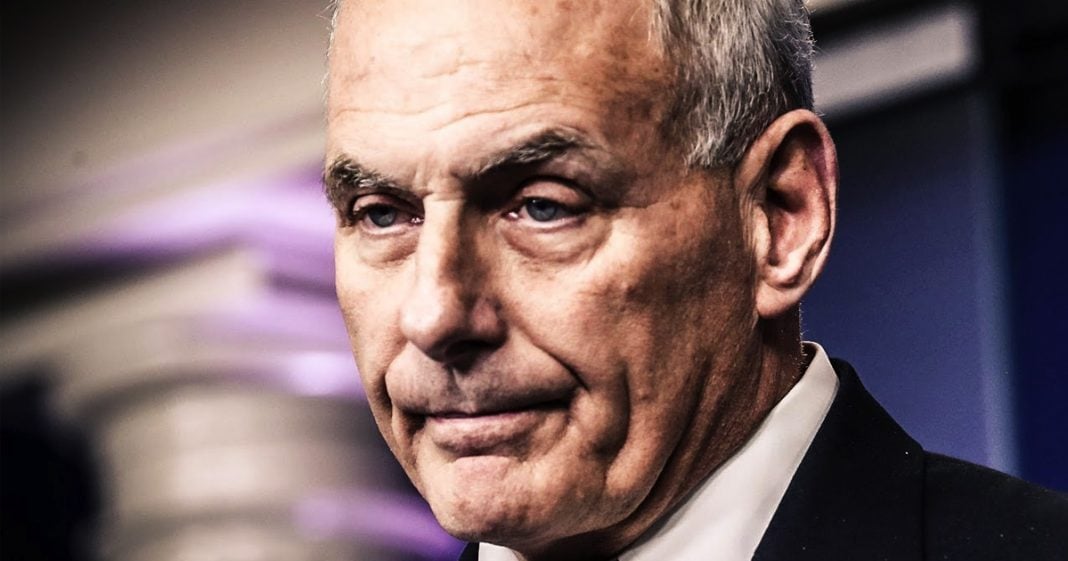 General John Kelly was brought into the Trump administration to be “the adult in the room.” Instead, he’s now at the center of the Rob Porter coverup scandal. But even before that, Kelly’s influence over Trump had proven to be nonexistent, and Trump has reportedly been calling former allies like Reince Priebus to complain about Kelly. Ring of Fire’s Farron Cousins discusses this.

General John Kelly was expected to come into the Trump administration and be, as the media said, the adult in the room. He was going to be the guy that was going to help reign in Donald Trump, tame all the craziness that had happened the first eight months of Trump’s presidency, and as it turns out now, John Kelly is just as bad as every other person that Donald Trump has put into his cabinet.

The latest example is with the entire Rob Porter cover-up scandal. On Thursday of this week the White House’s official story on why Rob Porter was allowed to stay, even though everybody knew that he had beaten his two ex-wives, their story changed three different times and nearly every single one of them revolved around John Kelly’s recollection of what actually happened.

What we know now is that John Kelly had known for months that Rob Porter beat the crap out of two of his ex-wives, and John Kelly was the man who urged Porter, even though he knew this information, to stay with the Trump administration. Now for those who don’t know, Porter was in charge of very single piece of paper that crossed the president’s desk, it went through Porter first. Porter helped to draft Donald Trump’s State of the Union Address, as well as many other speeches.

John Kelly understood that, he understood the value of it and decided that even though this man is a woman beater he was going to leave him in office because, you know what, he’s a decent enough guy. “I like him,” John Kelly told us, he told us he was a good guy. What was really happening was that John Kelly was front and center of the cover-up of Rob Porter’s disgusting history. Now, rather than being the adult in the room, John Kelly has found himself smack dab in the middle of this Rob Porter cover-up, and it actually only gets worse from there.

According to reports that came out Friday morning, Donald Trump has been making phone calls to Reince Priebus to complain about John Kelly’s performance. John Kelly recently got into a little spat with reporters where he told them that no, Donald Trump wasn’t going to get a deal on [dachas 00:02:36]. He misunderstood what the Democrats had said during their meeting, to which Donald Trump got understandably pissed off because John Kelly basically said the president wasn’t smart enough to understand what happens, “Just leave it to me, I’ll take care of everything.”

That’s been John Kelly’s endgame from day one. John Kelly doesn’t just want to be the chief of staff, he wants to be the guy behind the scenes pulling the strings. So far he’s done a pretty poor job of it. Donald Trump has not calmed down his horrible behavior, he hasn’t stopped his Twitter tirades against the media and fellow politicians. The insults, if anything, have only ramped up, the lies have continued. John Kelly has been an absolute failure since he came into office and this latest issue with the Rob Porter cover-up shows that it is beyond past-time for John Kelly to get out of the White House.

If Trump had any kind of scruples, which we know he doesn’t, he would fire John Kelly and he would make the public know that it was because of the Rob Porter thing. But we all know the truth, Trump has wanted to get rid of Kelly for a long time because he sees Kelly as ambitious, and he sees Kelly as a guy that doesn’t really respect or appreciate him, which Donald Trump, to be honest, doesn’t even deserve.

Kelly will end up getting removed from the White House. It’s just a matter of time before we see the reasoning that they use, and whether or not they’ll tell us the truth, or if they’re going to lie and say that it was because of the Rob Porter cover-up.