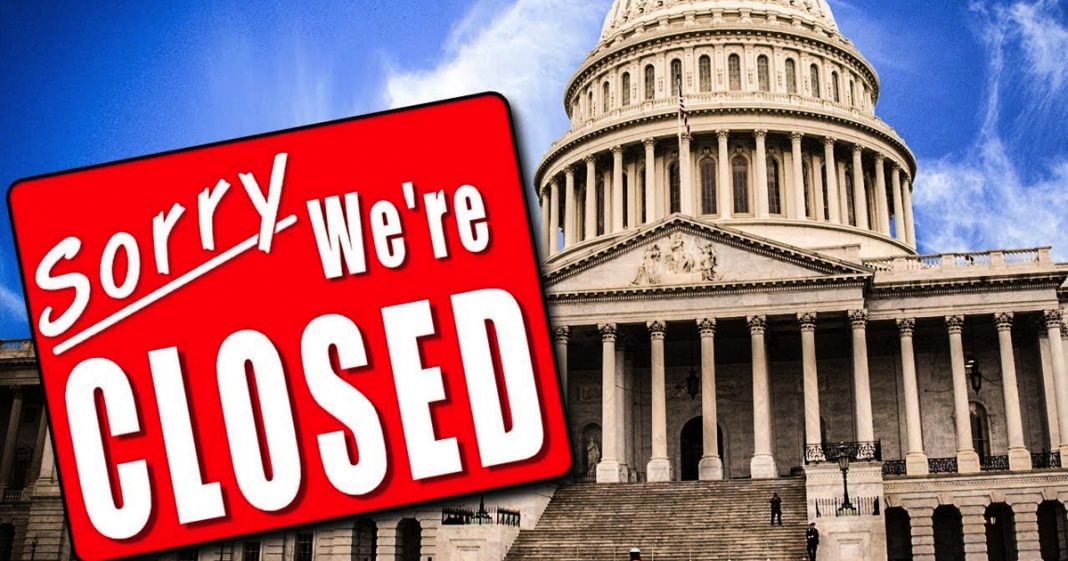 On Thursday evening, the federal government entered its second shutdown in the last 4 weeks. Though this second shutdown only lasted a few hours, it represents yet another failure of the Republicans who control every branch of our federal government. If Democrats had presided over two government shutdowns in the first month and a half of this year, you can bet that Republicans and their echo chamber would never let that die, and Democrats should take a page out of their playbook. Ring of Fire’s Farron Cousins discusses this.

For roughly seven to eight hours, early Friday morning beginning at midnight, the federal government once again shut down for the second time in less than four weeks. The Republican-controlled Congress could not come to a deal in time on some kind of budget extension, so Paul Ryan decides the government is just going to shut down for no particular reason. All of the pieces of the deal that was eventually made was were already there. The Republicans got the spending that they wanted. The Democrats got the spending that they wanted. Donald Trump was cool with it and decided to sign it, but Paul Ryan decided to be the little obstacle and put it off long enough, or create enough debate or doubt about it that he let the government shut down, and again this was a very short shutdown, just a matter of hours, but it was the second time in four weeks that the federal government shut down.

We’re a month and a half, actually less than a month and a half into February of 2018, or into 2018 in general, excuse me, and the federal government shut down twice in one year? The federal government is shut down twice in one election year where people like Paul Ryan are already terrified that Republicans are going to lose control and he thought it was a good idea to go ahead and let the government shut down again? This issue is less about what’s in that spending deal, except for the fact that they basically did nothing for dreamers in the United States, so that’s an issue they still have to figure out and they need to figure it out soon so that we could prevent these people from being deported to countries they’ve never even been to, but this is about Republican leadership, or I should say the lack of Republican leadership.

You can bet that if Democrats had shut down the federal government twice in four weeks, that’s something that Fox News would be talking about until basically the end of time. Republicans would use that as a campaign slogan every single election from here to eternity, and yet here we have Republicans twice in four weeks shutting down the federal government and acting as if it’s somehow the Democrats’ fault. When you control the executive, the legislative, the judiciary, the majority of state houses in this country, basically everything that happens is on your shoulders, the good, the bad, and the ugly, and these shutdowns have been incredibly ugly and they show that Republicans are completely unwilling not only to work with one another, but to ever reach across the aisle and say, “Hey, Democrats. What you got? Let’s figure something out.”

They’re so petty and spineless that they can’t get along with anybody, including the people who agree with them on 100% of the issues. That’s how inept and incompetent the Republicans in D.C. are today. I hope the public remembers that. I hope, as we approach the midterms this year, that the Democrats are smart enough to use these two government shutdowns as major talking points, because if Democrats had been the ones in charge, you’d better believe that the Republicans would never shut up about two shutdowns in four weeks.