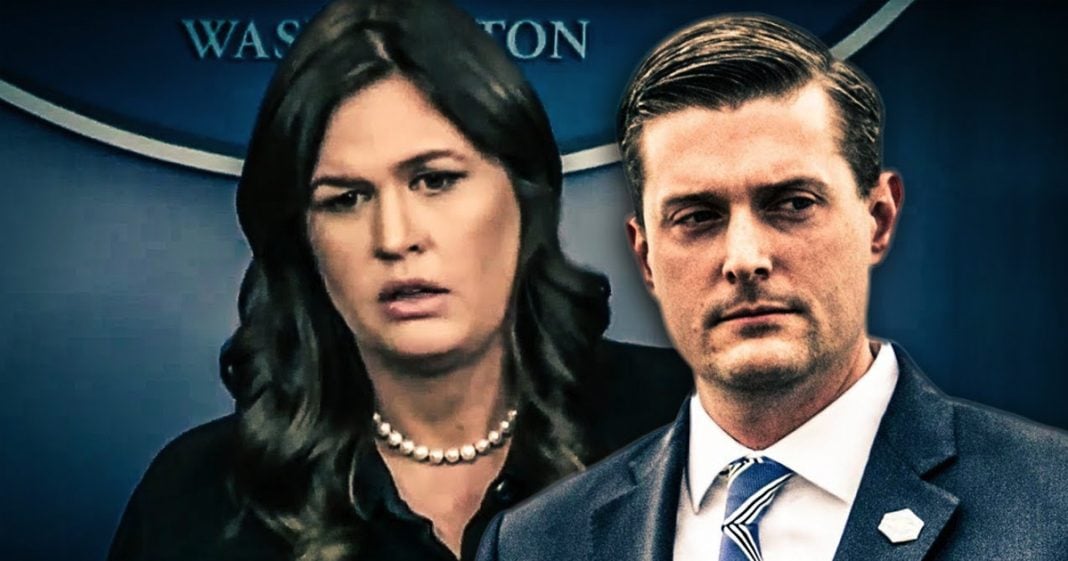 Trump’s Chief of Staff John Kelly and Press Secretary Sarah Huckabee Sanders did not mince words on Wednesday when they defended outgoing Staff Secretary Rob Porter who has been accused of brutally beating his two ex-wives. The images that have been revealed show Porter’s former wives with black eyes and bruises, and evidence suggests that the White House staff was aware of the allegations for a very long time, they just chose to do nothing. Ring of Fire’s Farron Cousins discusses this.

On Wednesday Donald Trump’s staff secretary Rob Porter announced that he was going to be resigning from the White House. He didn’t give a clear timeline of this resignation. White House said it could be today, tomorrow, could be next week, but he was definitely resigning. The reason for it was because this man has been accused of domestic violence by both of his ex-wives. In fact, photos have emerged of at least one of the women with a black eye and other bruises that she claims were given to her by Rob Porter.

Now The White House rather than saying, we’re going to get rid of Rob Porter, we’re going to accept his resignation and move on because he’s a bad person, they decided to take the opposite route. They did accept his resignation but not before going in front of America and telling us that Rob Porter was a really, really great guy. On Wednesday White House press secretary Sarah Huckabee Sanders took to the podium during her press conference to read a letter of denial from Rob Porter, letting everybody know that these women are liars, and that Rob Porter is a good guy, and that we shouldn’t believe the women, and it’s very sad what’s happened to him.

Later in the day General John Kelly said, “There’s no place for domestic abuse within The White House, however, the Rob Porter I know isn’t the kind of guy that does that. The guy I’ve gotten to know over the last few months is a good guy. I’m shocked by these allegations,” is what Chief of Staff John Kelly had to say. That’s not true. First and foremost, John Kelly knew about these allegations as far as back as last fall because Rob Porter failed to obtain a security clearance for his position in The White House because of the past domestic abuse on his record and the fact that one of his ex-wives had to file a restraining order against him, something that you can only get if you’re able to prove that this person you’re getting a restraining order from is a threat to you. John Kelly lied to the public, knew that Rob Porter had done this, or at least been accused of it, and sat there and lied to all of us, saying, “Rob is a good guy. I’m shocked by all this, blah, blah, blah.”

The White House right now is doing what most people in this country for some reason do, which is why women never come forward with this stuff. They’re saying that the women are liars. They’re putting all the faith in the man, and that’s why women don’t come forward. That’s why we suddenly once the MeToo movement got off the ground had all these women coming forward, people saying, “Why didn’t you come forward sooner?” This is why. It’s because nobody ever believes them. In this country, for some reason, women are always lying about it unless you can produce enough concrete evidence and even when you do, people like Sarah Huckabee Sanders and John Kelly will still say, “You’ve got those photographs, you’ve got the restraining order, I still side with Rob Porter.”

Remember when Donald Trump promised us when he came into office he was only going to hire the best people? So far we’ve got a guy that beats the shit out of women. We have a guy, Gorka, that was connected to White Nationalist organizations. We have a known racist, Jeff Sessions who says his only problem with the KKK is that they occasionally smoke marijuana. We have propagandists and Steve Bannon. I know those guys are no longer with the administration, but they’re worth pointing out. Donald Trump said he was going to hire only the best people. I’m sure in his mind those are the best people because they’re probably the most like him.