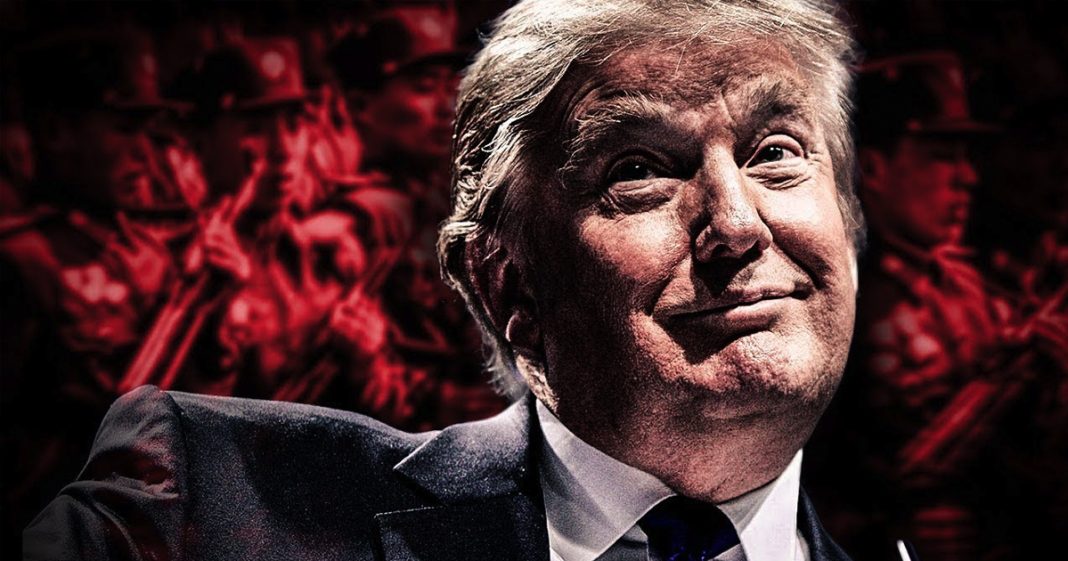 Donald Trump is once again blurring the lines between a Democratic Republic and a full-blown fascist regime by ordering the Pentagon to hold a grand military parade through the streets of DC. The President claims to have been motivated by seeing Bastille Day festivities in France, but in all likelihood he was more inspired by North Korean missile parades. Ring of Fire’s Farron Cousins discusses this.

Back in September, Donald Trump floated an idea to Chief of Staff, John Kelly, to ask the Pentagon what it would take to come up with some kind of grand military parade for Washington, DC, basically to show off our military might for the rest of the world. Well, here we are five months later and Donald Trump has decided that we are absolutely going to follow through with his plan from September and go forward with these grand military style parades in Washington, DC, all to honor Donald Trump.

There are several issues with this. The first is, Donald Trump says he got the idea for this after he was in France for Bastille Day and they did their parades, and they had their military out there marching. And it was a great show of patriotism. Well, Donald Trump needs to understand what Bastille Day is actually celebrating before he decides to bring it here to the United States. And I would venture a guess to say that Donald Trump is not actually inspired by France but was more inspired by North Korea. All those parades we’ve seen on TV of them bringing their missiles down the streets and the population standing on either side of the road cheering for these giant missiles to take on the West. That’s what Donald Trump is after here. That’s what he wants to emulate. This has nothing to do with France. And, as Bernie Sanders said, rather than emulate France’s parades, why don’t we emulate their healthcare system so that we can get every American citizen covered.

The second big issue is the fact that this parade is expected to cost roughly ten million dollars, money that could be better spent in the United States on, well, anything at all. There is an endless list of things that could use a ten million dollar investment here in the United States. Instead, Donald Trump wants to use it to showcase our military, which in reality is just showcasing him as Commander in Chief. As Tammy Duckworth calls him, “cadet bone spurs” wants to show the world what kind of military might we have, even though the guy never served a day in his life. And, when he had the opportunity, he continued to get deferments because his feet hurt.

And the most important thing that we should take away from Donald Trump’s military parades is that, this is what fascist regimes do. The focus on military might. The focus on what we have in terms of weaponry. That is fascism. Again, we see it in North Korea. We saw it in Germany in the forties, Bulgaria, other countries throughout the world that live in not so great places with not so great leaders. That’s what Donald Trump is emulating, that’s what he wants to bring to the United States. And, it is by definition, 100% fascism. But that is exactly what Donald Trump wants.