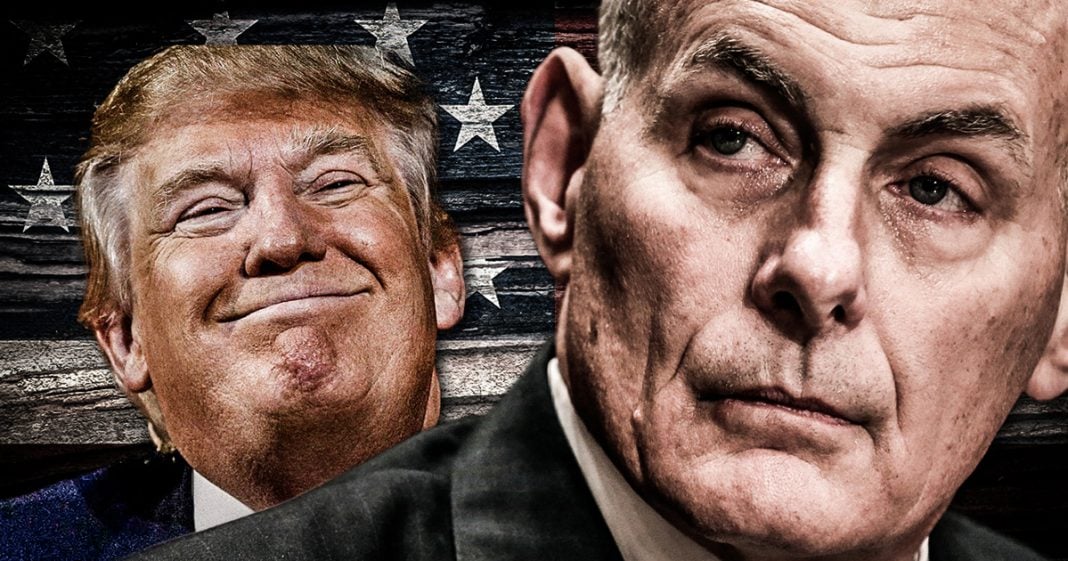 Donald Trump’s Chief of Staff John Kelly told reporters on Tuesday that the president likely won’t read the Democrats’ memo that rebuts the claims in the Nunes memo because it is just too long for him to sit and read. Instead, Kelly says that Trump will be briefed on the memo. For the record, the Democratic memo is only ten pages long, and if that’s too long for Trump to read then what else is he ignoring as President? Ring of Fire’s Farron Cousins discusses this.

The House Intelligence Committee has voted to release the Adam Schiff Democratic memo that rebuts what was put out last week in the Devin Nunes Republican memo. The Democratic memo is now sitting at the White House waiting for Donald Trump to read it, but as his chief of staff John Kelly pointed out to reporters on Tuesday, he’s probably not going to read it because it is “Quite lengthy.”

Let’s be clear about this, the memo from the Democrats, from Adam Schiff, is 10 pages long. 10 pages is what John Kelly, Donald Trump’s Chief of Staff qualifies as quite lengthy. A little too long for the president to read, he can’t be bothered by this. It would take roughly, if you’re a slow reader, 15 minutes start to finish to read that memo, and in reality would probably take about seven or eight minutes to read this memo. And yet that is too long, according to John Kelly, for Donald Trump to sit and read a document that is of vital importance to the American public.

Instead, Kelly says Donald Trump is going to be briefed on the memo. I don’t know how you can make 10 pages much more brief but I guess if you take a note from the Nunes memo, making it three and a half pages full of nonsense is a great way to start. I think what John Kelly is trying to do here is give Donald Trump a little bit of clearance so that when they eventually approve the release of this memo, which they eventually will, maybe it’ll be this week maybe it’ll be next week, but it’s going to happen cause they understand it has to or else it’s going to look really, really, bad for them. They’re going to say that Donald Trump didn’t read it himself so he wasn’t aware. He didn’t know that X, Y and Z were in there so you can’t pin it on him.

This was a John Kelly issue, this was another staffing issue, the fault lies not with Donald Trump on the release of this memo. John Kelly, while he’s saying that the president isn’t good enough to read 10 pages, is actually trying to give the president a little clearance here, and that’s something that a lot of people have missed in their analysis of this particular story. It’s not just that the president struggles to read 10 pages, it’s that John Kelly is already giving him an out, he’s crafting it into the argument by saying that Donald Trump isn’t going to read the memo himself, but that other people are basically going to read parts of it to him. Trump gets a little bit of clearance, a little bit of leeway when he releases this thing and it ends up being bad for his administration.

They can pin it on somebody else, probably not going to be John Kelly, probably another low level staffer that they could fire if they want to, easily throw under the bus if they need to. That’s what’s happening here. But the bigger issue is that yes, they have to release the memo. If they do not it’s going to look like they’re attempting to hide something from the Democrats, that they’re burying information, and it’s going to end up hurting them even worse than the Nunes memo did when it was revealed that Nunes had absolutely nothing and then later in the week he admitted that he lied in the memo about what the FBI told the FISA Court.

There is no good outcome for any of this for the Trump administration and especially not for Devin Nunes. My advice, brief the president, release the memo, and let’s move on to what actually matters in this country.