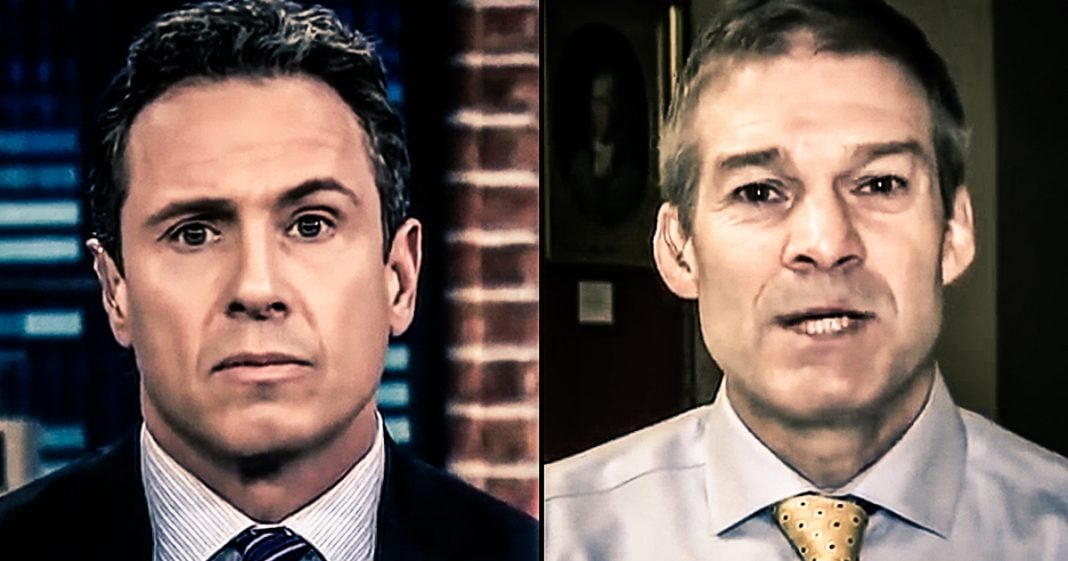 CNN’s Chris Cuomo is fed up with lying lawmakers, and he took Tea Party Republican Representative Jim Jordan to task for attempting to lie about both the FISA court as a system, as well as the FBI’s warrant against Carter Page. People like Jordan have no reservations about lying to the public, but Cuomo won’t let it fly on his show, as Ring of Fire’s Farron Cousins explains.

During an interview on CNN this week with Chris Cuomo, Representative Jim Jordan, a Republican from the state of Ohio, thought he could get away with lying about what was actually in the Nunes memo, and more importantly, about how FISA Courts and the FBI operate in general. Luckily, Chris Cuomo would have none of it on his show, and he absolutely popped Jordan for repeatedly lying throughout the segment. Take a look.

Chris Cuomo: You’re arguing the old meme of correlation equals causation, and it’s not the same thing. Maybe he didn’t know what their guidelines were. There could be a thousand reasons, who cares.

Chris Cuomo: They vetted the individual material themselves and they built on it, and I’ll tell you what’s shocking to me, Jim.

Jim Jordan: You don’t know that.

Chris Cuomo: Especially for a nuts and bolts guys like you.

Jim Jordan: You don’t know that.

Jim Jordan: No, no. You don’t know that.

Chris Cuomo: You don’t know any of this Jim.

Chris Cuomo: You didn’t even read the application. You’re rusting Trey Goudy who wants to resign rather than stay a part of this.

Chris Cuomo: And you called this …

Jim Jordan: They won’t show it to us.

Chris Cuomo: Jim, why would you call it a secret court? All you’re trying to do is undermine confidence in it. It was made by legislators. It’s a law, the FISA court.

Chris Cuomo: It’s not a secret court. They’re not in the woods.

Now those are just a few of the highlights out of that interview. The full link with the full video is in the description of this video. But here’s the thing. Cuomo is actually very, very quickly becoming one of the champions, I guess, of truth telling. I’m not saying that he’s the most honest person out there, but what I am saying is he is not letting Republicans come on his show and tell blatant lies to the American public, something that most Republicans are not prepared to battle against.

Jim Jordan was outwitted, outmatched, outplayed, outmaneuvered, out-everything, by Chris Cuomo in that interview, and typically I’m not one to sit there and make fun of the way somebody looks because, well I look like this, but I will point out that Jim Jordan, as he sits there lying to the American public, looks like a little weasel. He looks like some kind of rodent that really shouldn’t be trusted. I make no apologies for calling out this man and his greasy little look, trying to get away with lying about how things are working, because he is damaging our democracy and sometimes people like that are a little bit ripe for ridicule, just like Jim Jordan is. This is a guy who has no qualms, no reservations whatsoever about telling people things that he knows are not true, and luckily he did it on a show where Cuomo wasn’t going to have it.

Cuomo correctly pointed out that Jim Jordan has not read the FISA warrant, that nobody has. We don’t know, and yet that still didn’t stop Jordan from sitting there and telling us what was in the warrant, even though he hasn’t seen it and he really has no idea whatsoever. Jim Jordan is basically part of the Republican disease in Washington DC, that threatens everything about this democratic republic. He threatens everything that this country is supposed to stand for. He’s sitting there lying about how the FBI works. He’s lying about what the FBI did or did not tell the FISA court because we now know according to Nunes himself that yeah, the FBI did disclose that they were using the dossier and they told him everything he wanted to know about the dossier.

Jim Jordan, apparently didn’t watch that segment of Nunes on Fox and Friends, where he admitted that. Maybe he should go back and see that so that all of these moronic Republicans can get their talking points on the same page, so that you don’t have idiots out there admitting they lied and then more idiots coming back later to try to tell the same lies that their party already debunked. That’s the problem with Republicans. You start one lie, but then you don’t let everybody else know that you’re going to come forward and admit that it was a lie. Then everybody from that point forward just kind of looks a little dumber when they go on TV.

Hopefully Chris Cuomo continues to bring these people onto his show and point out their hypocrisy and more important, their stupidity, because we need a little bit more of that in the media. We need people like Chris Cuomo who are willing to hold people’s feet to the fire and more importantly to call them out when they try to lie to the American public.