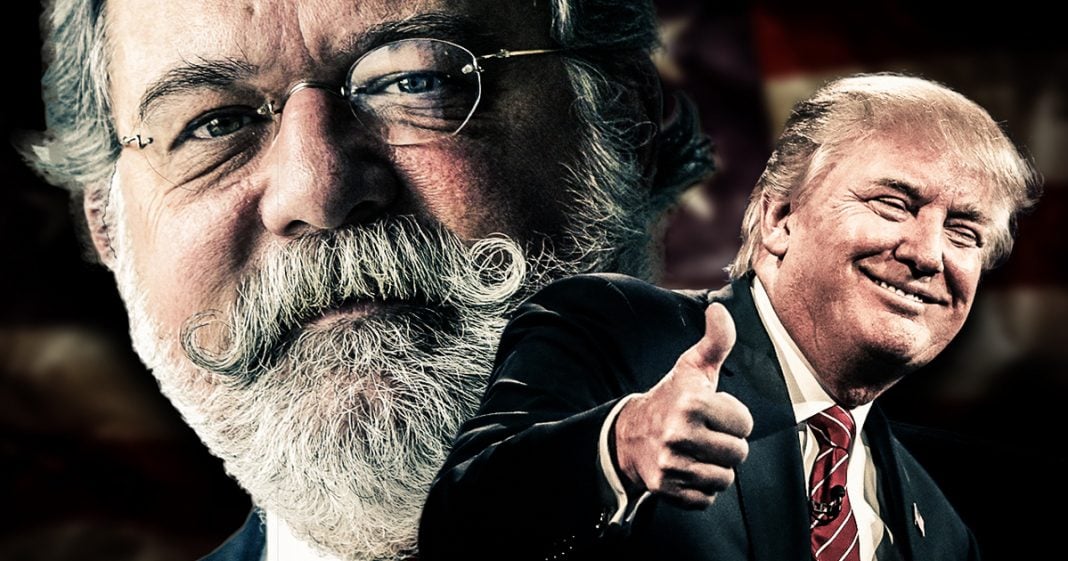 Nearly all of Donald Trump’s lawyers are begging the President to not sit down and have an interview with Special Prosecutor Robert Mueller, as they fear that he’ll walk right into a trap and commit perjury. But one lawyer says that he absolutely should sit down, and that’s his personal attorney Ty Cobb, the one man that he sometimes listens to. Ring of Fire’s Farron Cousins explains why Cobb thinks Trump should testify and what that could mean for the investigation.

Donald Trump’s lawyers are begging him, at this point, according to new reports, to not go and testify in front of Robert Mueller. Do not sit down for an interview with the guy, because if you do, you’re going to end up committing a crime. Specifically, you’re going to lie to him and that’s going to be considered perjury, and then you’re in deep trouble. Nearly every single one of Donald Trump’s lawyers behind the scenes is giving him this same advice, according to reports, except for one. There is one lawyer on Donald Trump’s team who believes that, “Hell yeah, you should testify in front of Mueller. Why not? Right?” That happens to be Ty Cobb. Now since Donald Trump became President of the United States, Ty Cobb has been in the news quite a bit for giving Donald Trump quite possibly some of the worst legal advice in the history of law in the US. Now, he is sitting here against the wishes of every other member of Donald Trump’s legal team telling him, “Nah, go testify. You’re totally going to be fine.”

I agree with Ty Cobb. I think Donald Trump should sit down for an interview with Robert Mueller and just tell him everything. Furthermore, I believe that the interview should be televised or at least recorded for us to watch later. I think that would be wonderful entertainment for everybody here in the United States and that would prevent anyone from thinking that the special prosecutor’s office tampered with anything so we can see the real life testimony of Donald Trump and what he had to say versus Robert Mueller sitting there telling him what everybody else already told him happened.

To be honest, that’s what the rest of Donald Trump’s lawyers are worried about that. Not that it’s going to be aired or TV or recorded, but that Donald Trump doesn’t know what Mueller has from all the other people so of course Trump’s going to lie. They know that he can’t be trusted, which is why they don’t want him to talk to him. That’s a sad statement for these lawyers to be implying but that is absolutely what they’re implying. That’s something that everybody in this country has to understand. It’s not that they think the investigation is trumped up and built on nothing, it’s that they know if he goes and testifies, he’s going to lie, because he can’t be trusted. If they can’t trust him, his lawyers, the people he is paying, then why should anybody else in this country trust Donald Trump when he tells us anything. When his own lawyers believe that the man cannot stop telling lies long enough to potentially keep himself out of prison, if he ever has to go and talk to Robert Mueller.

Of course, the other side of the coin is that if Donald Trump does refuse to talk to Mueller, he’s just going to get a subpoena from the Grand Jury and then Donald Trump is going to have to go testify not just in front of Mueller but in front of that actual Grand Jury. This is a lose, lose, lose situation for Donald Trump. There is no good outcome at this point. Mueller is closing in. Donald Trump knows that. Donald Trump lawyers, except for Ty Cobb understand that, and pretty soon the walls are going to come crashing down all around Donald Trump.