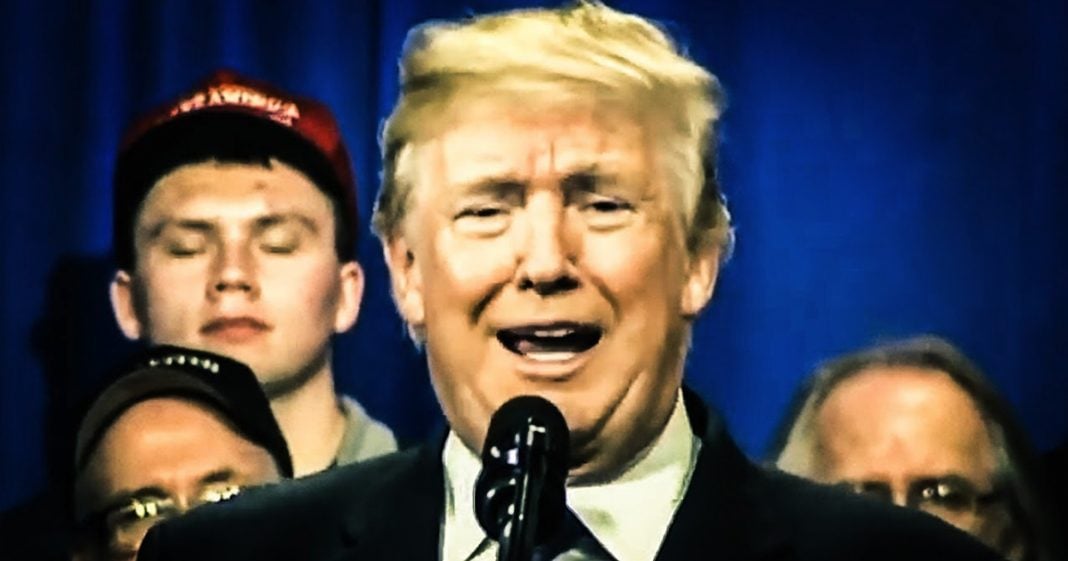 During a speech in Ohio on Monday, Donald Trump told a crowd that the Democrats who didn’t clap for him during his State of the Union speech basically committed treason, and that he believes we should call it exactly that. Trump knows a thing or two about treason, as that’s basically what his entire administration is being investigated for. Ring of Fire’s Farron Cousins discusses this.

Donald Trump is still angry that Democrats who attended his State of the Union address did not show him proper respect by applauding at every single thing that the man said. Here we are, a week later, and he is still pissed off about the fact that Democrats did not clap enough for him.

At a speech yesterday in Ohio, while he was supposed to be talking about the benefits of tax cuts, Donald Trump took a little bit of a detour, and instead, went after Democrats for not applauding enough for him, and accused them of a very serious crime. Take a look.

Donald Trump: You’re up there. You’ve got half the room going totally crazy, wild. They loved everything. They want to do something great for our country. You have the other side, even on positive news, really positive news, like that, they were like death and un-American. Un-American. Some of these are treasonous. I mean, yeah, I guess, why not? Shall we call that treason? Why not?

Here’s where we’re at right now as a country. Donald Trump, the president of the United States, believes that it is borderline treasonous against the United States for Democrats to attend his State of the Union address and not clap. Now, just so we’re clear, as I’ve pointed out a dozen times in the last week, the opposing party typically does not clap for everything that the president said. Republicans did it for Obama. Democrats did it for Bush. Republicans did it for Clinton. That’s typically how it goes, because they disagree with you on policy, so they’re not going to applaud things that they do not believe in.

They’re also not going to clap for you when you take credit for things that you didn’t do, or when you’re lying, as was the case with Donald Trump. To accuse them of treason for not clapping? I know this seems like just another stupid statement by the president, but it is much, much more than that. That crowd, the people in front of and behind him, loved it. They believe that Democrats are treasonous. Go read some of the comments that these morons post on Twitter when FOX News posts a story about how horrible Democrats are. They say, “Lock them up,” and oftentimes, much worse than that. They call for public executions of these allegedly traitorous Democrats.

This is dangerous language. Treason is a loaded word. Donald Trump understands that. That’s why he’s using it. He also understands treason, because it’s very likely that he, and members of his administration, and members of his family committed treason back in 2016 to help themselves win the election. That’s another reason why Donald Trump is trying to throw out the treason card against Democrats. He wants to deflect attention away from his own potential treason, and instead, use it to these Democrats, where he can throw it out there like red meat to his rabid, right-wing base that’s already calling for public executions of these people.

Now, the full video clip, there’s a link to it in the description of this video. I suggest you go take a look at it, because prior to Donald Trump’s treason comments, in the clip, he starts talking about Nancy Pelosi. He can barely get the words out of his mouth. I’m not sure what’s happening there, but it’s another major flub by the president. If you have time, please go check the link. Watch the entire clip. The bottom line is that Donald Trump knew exactly what he was doing by accusing Democrats of committing treason, because he understands that his rabid, right-wing base is going to eat that up. They will firmly believe that not clapping for Donald Trump is a treasonous offense.