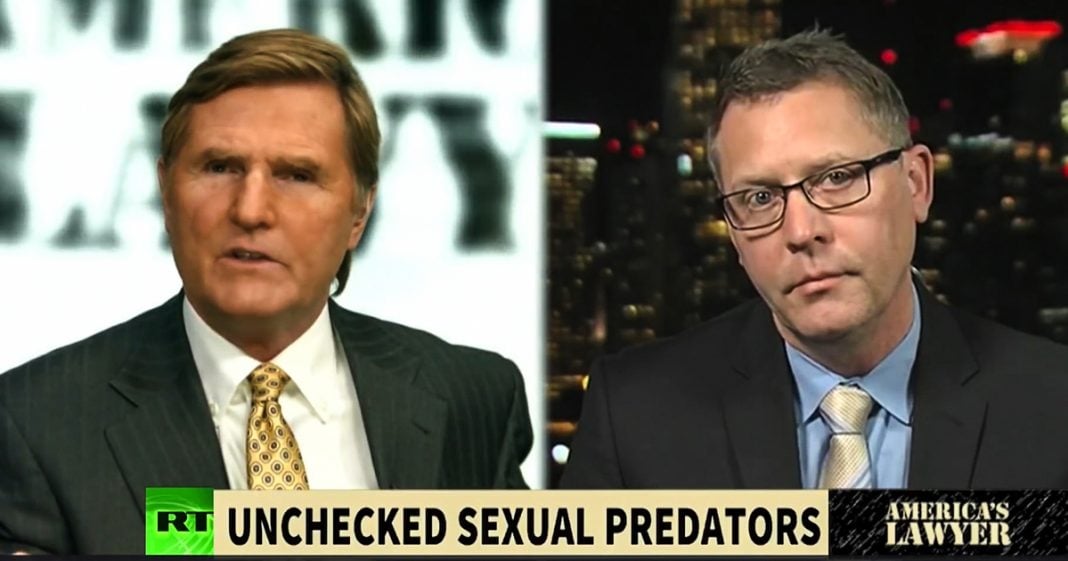 Via America’s Lawyer: Mike Papantonio talks with Attorney Matt Schultz about sexual abuse of young girls at USA gymnastics and how more charges may follow after Larry Nasser’s conviction.

Mike Papantonio: Larry Nassar was sentenced to 175 years in prison for sexually abusing underage girls for decades, but now the parents of those victims are joining civil lawsuits against the organizations that kept Larry employed throughout that entire period. Joining me to talk about this is attorney Matt Schultz. Matt, start by telling us, exactly who is Larry Nassar and what are the charges against him. Then we want to talk about how did it get so crazy.

Matt Schultz: Sure. Well, to know Larry Nassar, you have to understand the USA Gymnastics Association, which is a private organization that essentially selects, looks for, and trains up talent in the gymnastics world for the US Olympic team. Mr. Nassar, Dr. Nassar eventually, came to the US Gymnastics Association in the mid ’80’s as a trainer, and eventually went to medical school and became a team doctor, if you will. As it turns out, over the past 20, 25 years, there have been a series of sexual assaults on young girls, and thankfully it’s all come to light here recently.

He has been charged criminally. He was charged by the federal government with child pornography in a separate issue, and then eventually charged with destroying child pornography off of his computer, but he was charged in state court with initially three sexual assaults on these young girls, and then additional charges were filed. And as you mentioned, Mike, he was recently sentenced to 175 years in prison for that. We’re now seeing a movement toward the civil lawsuits beyond the criminal charges.

Mike Papantonio: Matt, you’ve tried cases all over the country. You’ve been involved in some of the most complex cases in America. And every time you go to trial, every time you engage in discovery, you usually see a trend where we start early on in the case, you start hearing things. Somebody says this about a product. Somebody says this, a scientist or a doctor, and all of a sudden you keep hearing it again and again, and typically what we see is corporations ignore the things that they think might interfere with their profit margin. Tell me what your take is on this in that regard. Were there no signs that for more than 20 years he sexually abused women through his work at Michigan State University and the USA Gymnastics? These organizations had to have some warning signs, didn’t they?

Matt Schultz: I think clearly they did. We know there were complaints going back at least to the year 2000 with Michigan State. There was a retrospective investigation done where they actually found cause. In other words, found that he had molested one of these young girls back in that time frame. You know Mike, I looked up the budget of the USA Gymnastics organization. We’re talking about an organization that has somewhere around 28 million dollars in assets on an annual basis. This is not a small mom-and-pop operation. They have a vested interest. The university had a vested interest in seeing that this didn’t come to light.

Now, I have not seen the evidence. We will certainly have a lot more come to light between the attorney general special prosecutor investigation, and of course, civil lawsuits, which are the greatest engine ever invented for discovering corporate malfeasance like this. So I predict that by the time we get into discovery on these cases, you will see that there was a lot of knowledge from the top down.

Mike Papantonio: Matt, we’ve seen this same scenario play itself out with the Catholic Church where, gee it’s like the three monkeys. See no evil, hear no evil, and speak no evil. We don’t know what’s going on. I’m sorry. We saw it with Penn State. We see it again and again, this same scenario where somebody intentionally makes the decision that profits are more important than the lives of those children that are being affected. Now, is this civil suit, as you point out, civil suits are being filed against both the USA Gymnastics and the university. What do you think are the chances of these suits being successful? What do you anticipate in understanding how a lawsuit evolves? How do you typically see these things evolving to where we get one little bit of information and that leads to the next, and then somebody blows a whistle. What is your take on how you think this thing will evolve, based on the facts that you’ve seen so far?

Matt Schultz: Well, we have seen that, Mike, you and I both in our work, whether it’s tobacco companies, pharmaceutical companies, Monsanto, who you were just speaking of. You get in early into the investigation. You have bits and pieces of information. Once you can actually put somebody in the hot seat, get documents, start asking hard questions of people when they’re under oath and have nowhere to run. Then you eventually get to the truth. You mentioned the Sandusky affair at Penn State. I think that’s a good example. You know, Louis Freeh, the former FBI head, did an investigation and revealed that Paterno had knowledge, the university president, university vice president, the athletic director all were implicated in that affair. And you’re going to see a similar investigation here, both from the attorney general and through the civil lawsuits.

And I do believe we will, just given our experience in years of doing this, that we’re going to see you can’t have this level of, frankly, depravity. This consistent course of malfeasance, misconduct, without anyone knowing about it. And we already know there are complaints lodged that the university and USA Gymnastics apparently swept under the rug.

Mike Papantonio: And of course, this story seems to fit into the same pattern of schools and other sports organizations that are making money. Understand, the university made a lot of money. They look at the, what is the totality of the money coming in to the university. That is going to trump every time. It’s going to trump the best interests of athletes, if they’re affected, or students, if they’re at risk. Always the pattern has been, we’re always gonna opt for the side of our bottom line. This really is a bottom line analysis, isn’t it? Don’t you think by the time this is over, we’re gonna see that this is all about dollars and cents again? It’s not about children’s welfare. It’s about dollars and cents. What’s your take?

Matt Schultz: I think that’s right. I think that’s where this will end up, and that’s why we have punitive damages under our laws. At least, most states do. Punitive damages are to punish specifically corporations, whether it’s universities or again, pharmaceutical companies, tobacco companies or what have you, that put profits over safety or, in this instance, over the emotional and physical welfare of the people in whose care these organizations were vested. And so I predict that by the time discovery is over and the full truth has come out, if the universities and USA Gymnastics don’t successfully settle these cases, that we will see punitive damages on the table because I predict there will be that level of misconduct.

Mike Papantonio: I agree. One other prediction I have is that the NCAA as this goes forward will not do much to really help. NCAA is such a money machine. They are an absolute cash cow, and they’re gonna do everything they can do to make sure that this is minimized as far as the impact. Matt Schultz, thank you for joining me. I want to stay with you as these cases develop. Thank you for being here.