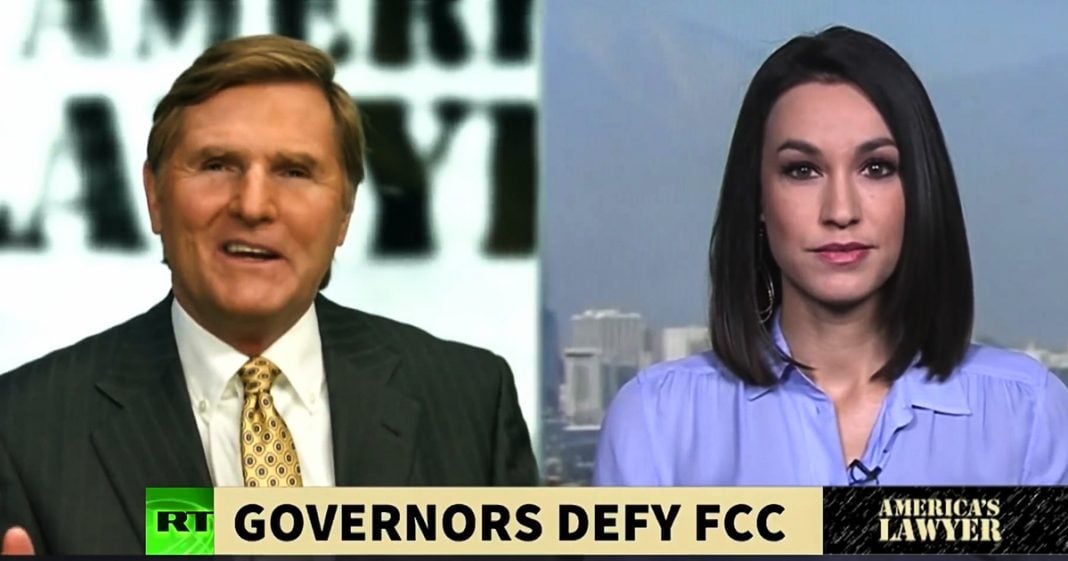 Via America’s Lawyer: Mike Papantonio is joined by RT’s Brigida Santos to discuss the Governors decision to defy the FCC’s repeal of net neutrality.

Mike Papantonio: Two state governors signed executive orders that say if internet providers wish to do business in their states they’ll have to agree to abide by net neutrality rules. This directly clashes entirely with the FCC’s decision at last December’s meeting to repeal those rules, and some believe this could lead to a major legal battle between the state and federal government. It’s all good if a battle does take place. Joining me now to talk about this is RT correspondent Brigida Santos. Brigida, which governors are involved in this? Hopefully they’ll have the guts to follow through. What’s your take?

Brigida Santos: New York Governor Andrew Cuomo has just signed an executive order, as you said, preventing any state officials from buying internet services from ISPs who do not follow net neutrality rules. That means any service providers who block, slow or prioritize specific content or websites simply will not be able to work with the state. That announcement was made just days after Montana Governor Steve Bullock passed the same executive order in his state.

So far at least 21 states, and also the District of Columbia, are suing the SEC over its decision to repeal net neutrality. Unfortunately, that fight is a partisan fight, where it really should not be. Every state that has a Democratic attorney general has signed on to that lawsuit, while zero Republican attorney generals have joined the fight, and this is despite the fact that 83% of Americans, regardless of party affiliation, strongly support net neutrality rules, Mike.

Mike Papantonio: Brigida, explain why do we want net neutrality? Most people don’t understand, but you have the Republicans that tried to take access away from the average user. Give us your take on the need for net neutrality and how dangerous this is for the feds, these boneheads that did this, knowing overwhelmingly that the public was against it. Tell us how dangerous this is. If these governors don’t succeed, what could happen here?

Brigida Santos: What could happen here is that these internet service providers, they know that they can make more money by requiring consumers to pay more money for faster service, and they can also start blocking any content that they don’t like. Imagine people and journalists who are writing dissenting articles, maybe their articles will start being blocked as well. This is incredibly dangerous.

What I find so hypocritical is that it’s usually the Republicans who want stronger state government and more power for the states, and that’s absolutely the opposite of what they’re advocating for here, Mike.

Mike Papantonio: Brigida, it’s interesting that every major corporation in the country is fighting tooth and nail … I mean Comcast, AT&T, NBC, ABC, CBS, all these people are fighting to make sure that the FCC repeal stands. They’re terrified that the governors might actually win on this, but this is dividing very much into a states rights argument versus a feds argument. As this goes, what is your take? What’s the best thing the governors can do as far as making sure that the public understands who’s really behind this, and that’s big corporate America?

Brigida Santos: I actually think that they’re doing exactly what they need to be doing, and that’s because they do have a good argument here. Now the FCC passed rules that are barring states from passing their own net neutrality rules, but that’s not what happened in New York and Montana. Those governors say that internet service providers are free to not follow net neutrality rules all they want. It just means that the states are not going to buy their services, and I think that sends a great message to the public to pay attention to who is driving this argument right here, Mike.

Mike Papantonio: Yeah. So AT&T … Again, I come back to AT&T. They are really the pigs at the trough. That’s the only way … What you have is corporate pigs at the trough. The feds have delivered them … They say here’s this gift. You have AT&T saying that they want Congress to enact a permanent bill that says nobody can interfere with our unfettered right to do what we want to do in setting rates. We can charge you as much as we want to charge, and you can bet they will. What is your take on AT&T’s strident position here?

Brigida Santos: Again, it’s hypocritical. AT&T is saying publicly that they want a permanent so called internet bill of rights that would protect consumers, but AT&T has never supported net neutrality. Again, all of these internet service providers have their lobbyists on Capitol Hill helping to draft legislation that would be in the favor of those companies, not in the favor of the public, Mike.

Mike Papantonio: Well, Brigida, this is one we’re going to have to watch. It’s going to be a fight, a royal, royal fight between the states and the feds, and this is one you really hope the feds … The feds have got to lose this fight if we’re going to preserve net neutrality. Thanks for joining me, Brigida.