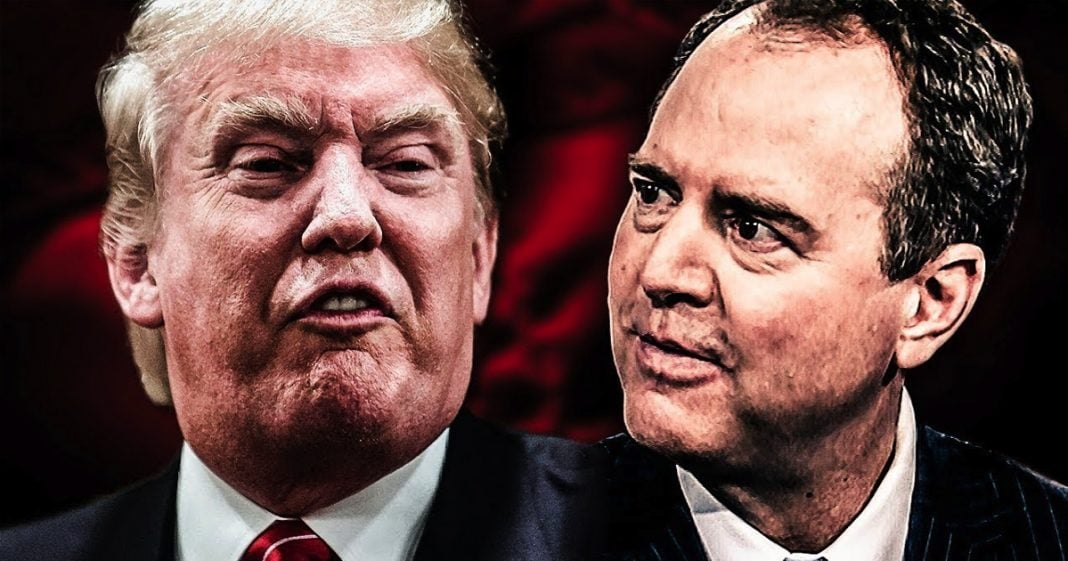 Donald Trump got into an early morning Twitter feud with Democratic Representative Adam Schiff, presumably sparked by Trump’s anger that the Nunes Memo had virtually no impact on the Mueller investigation and quickly became a laughing stock. Trump’s behavior increasingly indicates guilt and desperation, and his attack on Schiff is a prime example of both. Ring of Fire’s Farron Cousins discusses this.

I guess in some kind of effort to upstage Paul Ryan’s stupid tweet from this past weekend about that secretary getting $1.50 a week raise, on Monday morning Donald Trump decided to take to Twitter to once again prove that he is the king of stupid tweets. Now Donald Trump decided after watching Fox and Friends this morning that he was going to attack Adam Schiff, the ranking Democrat on the House Intelligence Committee who’s been very outspoken about the nothing burger that was the Nunes memo released Friday. Donald Trump tweets out the following: “Little Adam Schiff,” is how he started this. “Little Adam Schiff who is desperate to run for higher office is one of the biggest liars and leakers in Washington, right up there with Comey, Warner, Brennan and Clapper.

Little Adam Schiff. Now let’s forget for a minute that the President just accused the ranking Democrat on the House Intelligence Committee of committing a felony, we’ll get to that in a moment. Little Adam Schiff. Donald Trump’s wife, Melania, has made it her duty as First Lady to tackle bullying in the United States, particularly cyber bullying. Here her President, one of the most disgusting human beings to ever walk the face of this earth, is out there on Twitter on a Monday morning referring to a man, a civil servant serving in the House of Representatives, a powerful Democrat, as little Adam Schiff. Donald Trump, President of the United States has nothing better to do with his time than to insult sitting members of Congress because he disagrees with what they have to say.

Actually, a little bit more importantly than that, because this man, this little Donald Trump is terrified about this ongoing investigation, and even he knows in spite of tweets to the contrary that this Nunes memo proved absolutely nothing. In fact, if anything, it made his case a hell of a lot worse. There were a lot of things released in that Nunes memo specifically dealing with Carter Page that were later then corroborated by independent stories including emails and interviews given by Carter Page himself. Carter Page had been interacting with Russians for years, and years, and years, said that he was an advisor to officials at the Kremlin. I would say that constitutes being wiretapped, if you’re working on a federal presidential campaign.

Nunes’ memo was quite possibly a huge nothing burger. I know Republicans think that is proves some kind of conspiracy at the FBI that does not exist. If you looked at that memo, if you actually read it and saw the things in there, and you still think that there’s something to it, then reread it or go take a class and learn how to properly read because there’s nothing in there that in any way paints Democrats as doing something wrong. Nunes really screwed the pooch on this one because that memo hurt him a hell of a lot more than it hurt anyone at the FBI, anyone in the Obama administration or anyone in the Clinton campaign. That’s why Donald Trump is pissed off and scared. That’s why he’s going after Adam Schiff.

Let’s get to the second part of the tweet. He said he illegally leaves intelligence meetings to go leak stuff to the press. That was the back half of his tweet there. He illegally leaves meetings to go leak stuff to the press, a felony, if true. Unfortunately, for the President, there’s zero evidence to back any of that up. This is the same guy who accused President Obama of committing a felony by illegally wiretapping Donald Trump, which did not happen. Carter Page was the one who was under surveillance, not Donald Trump. All those people saying Donald Trump is vindicated in his claim, no, he’s not. I suggest you learn how to read context and more specifically, read the actual words that were said by both parties. You’ll see that no, Donald Trump was not vindicated in anything. If anything, it paints his campaign as even more involved with the Russians than we previously had thought.