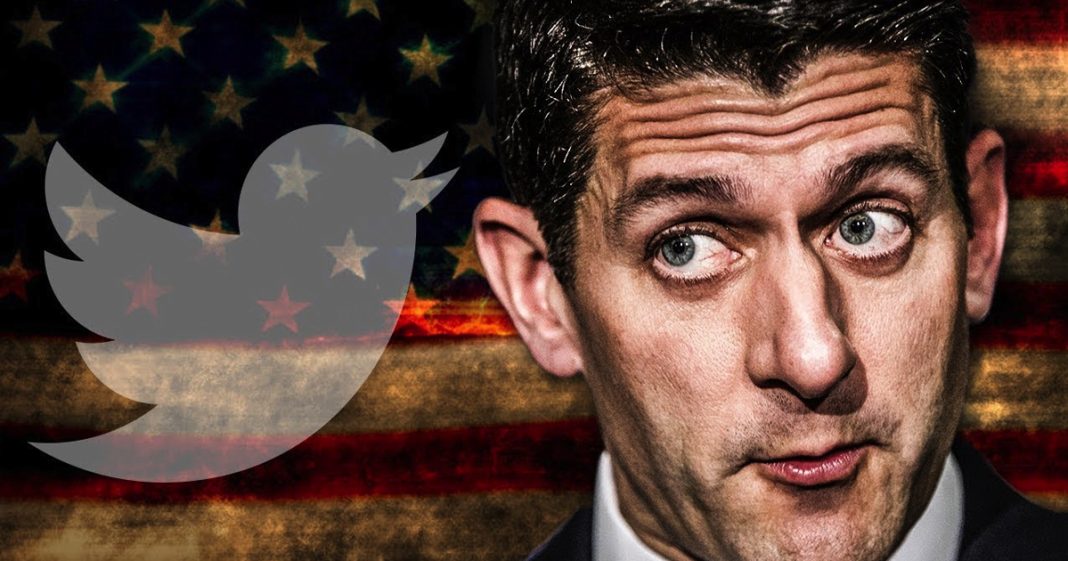 This past Saturday, Paul Ryan thought that it would be a smart idea to send a bragging Tweet where he talked about a public school secretary receiving an extra $1.50 per week, a “raise” that he linked to Republican tax cuts. Not only did he delete the Tweet after massive backlash, but he’s also pushing to cut social safety net programs to pay for these tax cuts and to further screw over the working class. Ring of Fire’s Farron Cousins discusses this.

Typically Republican stupidity on Twitter is dominated by people like Donald Trump and of course Donald Trump Jr. Whether it’s tweeting out to emails between him and a Russian lawyer that kind of hints at possible collusion or Donald Trump just being in general a bully to anybody he doesn’t like, stupidity usually is dominated by one of those two Donald Trumps. But this past weekend, Paul Ryan showed that he can hang with the big dogs and be just as stupid as they are.

Saturday morning in a tweet that was connected to an article talking about Republican tax cuts, Paul Ryan tweeted out the following, “A secretary at a public school in Lancaster Pennsylvania said she was pleasantly surprised her pay went up a $1.50 a week. She said that will more than cover her Costco membership for the year.”

Well obviously Twitter immediately reacted to Paul Ryan’s insensitive tweet there which it should be noted came from Paul Ryan’s personal Twitter account not his official @SpeakerRyan Twitter account. Nonetheless, people jumped on this basically attacking Paul Ryan for bragging about the fact that woman, a public school secretary is getting an extra $1.50 a week as if that’s something we as a country should be proud of. But furthermore, as if that’s something that he wants to take credit for as a result of the Republican tax cuts.

Now Paul Ryan after huge backlash, ended up deleting the tweet but not before enough people, myself included, got a screenshot of it because sometimes you can just tell this is a tweet that’s going to be taken down pretty soon. Randy Bryce, Paul Ryan’s opponent in the Wisconsin House of Representatives race this year, decided to use this as a perfect opportunity and he encouraged his supporters to each send him a $1.50, which they did. So Randy Bryce is using Paul Ryan’s own ignorance against him which is a phenomenal campaign tactic and something that I think a lot of people would support.

But let’s go back to the whole $1.50 thing anyway. When the Republican tax cut was enacted and people started talking about, Republicans were talking about you’re going to get a raise. Nancy Pelosi referred to these as crumbs. Those $1,000 pretax bonuses that some people got she called crumbs. And she was attacked relentlessly for it by Republicans by saying that she’s so out of touch, she doesn’t understand how much money is to these poor little workers throughout the United States.

Well guess what folks? A buck fifty a week is crumbs. That’s literally crumbs when you consider the fact that corporations are pocketing hundreds of millions of dollars a piece as a result of this Republican tax cut. They get $100 million, $50 million, even $10 million, we get a buck fifty a week. In what universe is that fair? Furthermore to kind of counter Paul Ryan’s claim a little bit more, this woman is a public school secretary so she’s not even working for a company that’s getting tax cuts so why would he even attempt to tie her raise to tax cuts? None of this made any sense. I think Paul Ryan understood that pretty quickly and that’s why he deleted the tweet. But this was an incredibly insensitive, out of touch tweet that Paul Ryan sent out but it show exactly what Republicans think of people.

They think that if you get an extra, buck, buck fifty a week, hell maybe even those lucky ones that get $2 a week, that you should be groveling at the feet of Republicans, kissing their feet, telling them thank you so much, now I can go buy a soda out of the vending machine one day a week with this fucking raise. Because that’s what they want you to do. They want you to think that this means something but it doesn’t. They’re giving everything possible to corporations and we are getting the crumbs. A buck fifty a week is crumbs.

And at the same time that Paul Ryan is talking about the fact that we should be grateful for this $1.50 that one woman got, he was at a Republican retreat talking about the fact that we were going to have to cut social safety net programs like social security and Medicare in order to pay for these disgusting Republican tax cuts. So not only do we get the crumbs of the tax cuts but now they want to cut those programs that we’ve been paying into since we started working. One of them so that we can some kind of retirement now that Donald Trump’s tanking the stock market and the second is basically a backup healthcare program that we can have once we hit a certain age.

We’ve earned those. Those are earned benefits that we have been paying for since we started working and Paul Ryan wants to take it away from us so he can give billions to corporations while the rest of us get, I guess, a buck fifty.