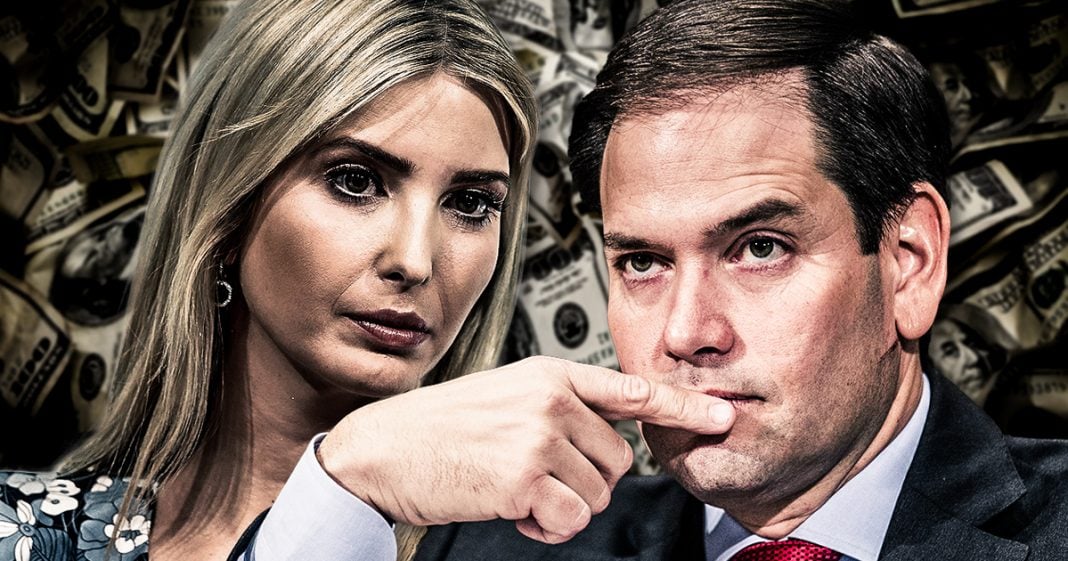 Ivanka Trump – a woman that knows absolutely nothing about economic policy in the United States – has teamed up with GOP dimwit Marco Rubio to come up with legislation that would allow for paid parental leave in the United States. Sounds like a good plan, until find out where the money is coming from: They want to steal money from Social Security to pay for their plan, leaving people with virtually nothing for their retirements. Ring of Fire’s Farron Cousins explains why this plan is an epic disaster.

So, what’s the problem with these two working together? Well, the problem is the fact that the plan they’re currently working on requires parents to take money out of their own social security accounts, money they’ve been paying in for years and years, and that would be used to supplement them so that they could take their paid parental leave, which would also obviously mean that they would have to put off retirement, as most Americans only have social security as their retirement savings account. So basically Ivanka Trump and Marco Rubio, these two policy wonks, believe that American citizens should basically have to start stealing money from themselves if they want to get paid parental leave.

Now, correct me if I’m wrong, but didn’t corporations in this country just get a massive tax cut? Didn’t they just get to pocket billions of dollars? In fact, I think it was actually about $1.4 or $1.5 trillion that’s going back in their pockets. So, why do we have to steal from our future self in order to get paid parental leave? I would think common sense would tell you that since these corporations just got a massive tax cut and they’re getting tons of money back, that they would be more than able to pay for paid parental leave for people who need to leave whenever their child has a serious illness or whenever they give birth to a new child or whenever they adopt a child or whatever you want to use your parental leave for. I think corporations have enough money to pay for that now, thanks to the Republican tax cut.

Or did I miss something about that? Maybe it’s because I read the reports where corporations admitted that they weren’t going to use this money on their employees or that they weren’t going to use it to expand their operations, and instead they were going to split it up among their shareholders as bonuses, or they were going to reinvest it in the United States by buying back their own stocks, which would only serve to make more money for their shareholders and do nothing for their employees.

Ivanka Trump and Marco Rubio have no business whatsoever working on policies together. It’s bad enough that it’s literally Marco Rubio’s job to develop policies, but bringing in Ivanka Trump, that’s how we end up with a train wreck of a situation like this where they say, “You know what? We’ve got plenty of money, so why don’t we just tell Americans that they also have plenty of money that they’ve been paying into to their retirement accounts via social security and you can just take the money from your future self and use that to do what you need to do now.”

That’s why we have such a massive debt problem among citizens here in the United States. That’s what debt is. Taking money away from your future self for something that you need now and a lot of us cannot help it. We have to do it. Student loans, stealing from your future self in order to pay for an education now. We have to do it, though. Same thing goes for car repairs if you can’t afford them. Home repairs. Things like that. Medical bills. But paid parental leave, no. That’s something that the corporations that we work for have plenty of money to cover, and if you want to come up with a meaningful policy that actually helps people, then you tell corporations that, “Guess what? This one’s on you. For once, you’re going to step up and do something good for your employees so that they don’t have to steal money from themselves 20 years in the future, screw over themselves on their retirement so that they have to work until they drop dead on the factory floor,” because that is what Ivanka and Marco Rubio’s plan would mean for millions of American citizens.